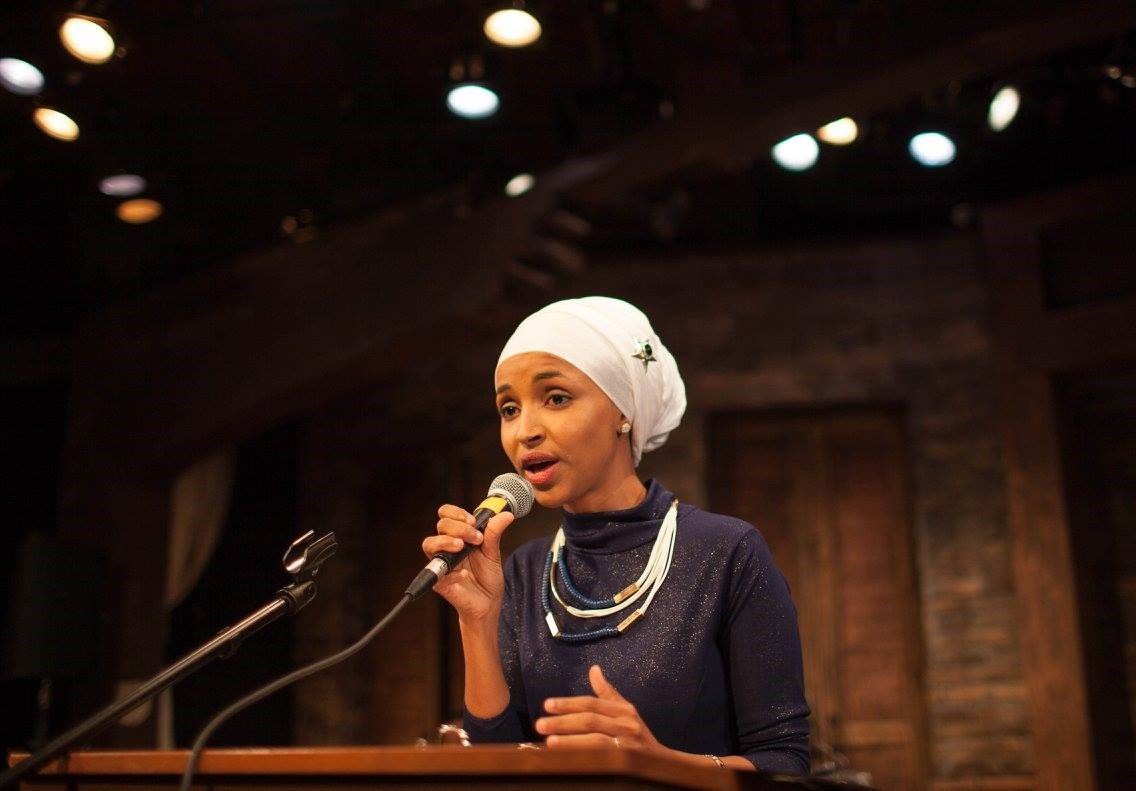 It is the morning after her campaign launch when Ilhan Omar, candidate for state representative in Minneapolis’ House District 60B, and I sit down. Omar is still visibly glowing from the success of the Nov. 11 launch at Mixed Blood Theater.

“My sister said it felt like a victory party, not a kick off party. Because we’re used to the 20-40 people in a room for a kickoff. I guess that’s what I also expected, but to be in a room with over 250 people felt almost surreal,” Omar said.

Omar’s launch had felt different. There was a celebratory feel in the air rather than the anticipated staleness of party machinery gears kicking into motion. An estimated 220 people from diverse backgrounds had packed the room in support of Omar’s bid to unseat incumbent state Rep. Phyllis Kahn–who has served the area since 1973–and defeat the other candidate for District 60B, Mohamud Noor.

Omar has unique appeal as the third candidate in a district whose last election cycle was marred with violence and allegations of fraud during the DFL caucus. Aside from the huge interest she draws as the first Somali-American woman to run for State Representative nationwide, she has also managed to engage portions of the large student population in her district, and long time community residents and activists dissatisfied with politics-as-usual. For many, she is a beacon of changing times. Or at least, the need for change.

For Omar, who has been both a grassroots and political organizer and also served as a senior policy aide to Minneapolis City Council Member Andrew Johnson, these experiences fomented her desire to run for office. She quickly came to the realization that in these roles she was more “the help” than a leader creating change.

“No matter how many times we are assisting others to make decisions for us, we need to be the ones at that table. I want my voice there because my voice is the voice of so many people,” she said. The urgency of the work to be done meant that Omar could no longer be content with being ‘the help’.

Her platform is forward-thinking, inclusive, and informed by her experiences as a parent, a Minnesotan, a new-American, and a woman of color. She calls for the state of Minnesota to invest in clean energy and stronger enforcement of environmental laws; equity through criminal justice and sentencing reform; tackling Minnesota’s bleak education outcomes for students of color; fair wages and scheduling, and increased economic opportunities for minority and women-owned businesses; and safer neighborhoods through culturally competent policing and increased gun control.

“I think there is the political will to excite people around it,” Omar said in response. “Sometimes an idea is planted and it takes root. These are doable things. But I’m also optimistic in my sense of being an organizer and really understanding what movement building means with collective power.”

Omar cited President Barack Obama’s ability to translate “out there” ideas, such as sentencing reform and universal healthcare, into action and policy.

Omar intends to do the same, and much like President Obama, she is breaking new ground while at it. The fact that Omar as a black Muslim woman, a new-American, and an immigrant is challenging outdated notions of what political candidates look like is not lost on her. She has already faced some opposition within the Somali community in running against Noor, another Somali-American, but sees this as an opportunity to move beyond identity politics.

“I’m also running against a woman,” she said, referring to the incumbent Kahn, “and I’m a woman. That narrative also exists. I think it’s a chance for us to have a real conversation about what really matters. It’s necessary that we elevate the conversation beyond our identities.”

Omar has undoubtedly achieved this within the Somali diaspora community.

“I think it’s excellent that she’s running for office. I can honestly think of no other person who best represents her community and Minnesota as a whole. It’s definitely inspiring to me as an East African woman to see another East African woman who’s also a mother, a daughter, a sister, all these things, running. I’m excited,” said Lula Saleh, writer, poet, and one of the artists who performed at Omar’s campaign launch.

As a woman coming from a deeply patriarchal society where women, though engaged civically and politically, are often not in visible leadership roles, she is finding herself the topic of much needed conversations around representation. Omar pointed to the reception she has received, as opposed to other Somali male candidates for office in the diaspora.

“For me, there’s been a lot of questions about ‘why are you running?’ and ‘are you qualified to run?’” she said. Where the qualifications of male candidates are given, Omar has to maneuver the systemic sexism that hounds women who enter the political arena, except on two fronts.

Nonetheless, Omar sees the benefits in engaging in these conversations around what a good candidate looks like. She said she knows that she is inspiring many more young women (who frequently reach out to her) who may want to enter politics but lacked a blueprint or a public figure they could point to as evidence that their goals were attainable. The power of this increased visibility has also meant added pressure.

“I’m scared to death of failing,” Omar said. “I have to think about what I wear, how I speak, how I interact with people. How do I stay authentic to who I am? It’s a lot of pressure.”

Which is where Omar’s family comes in, a natural check to the madness of running a political campaign. Raised mostly by men, Omar jokes that her feminism is derived from her father and grandfather, who have both been influential in her life. Her grandfather was the spark that lit her interest in politics. As new immigrants in the 1990s, Omar’s grandfather would drag her to caucuses and party meetings where he thrilled in watching democracy at work and she functioned as his translator. As an adult in early post-colonial Africa, Omar’s grandfather had seen his dream of democracy dashed when the civil war broke out in Somalia. His arrival on American shores was a chance to be a part of real democracy.

“He was very optimistic to what democracy would bring. That resonated with me, that politics was a way to create change and to give hope to people,” she said.

Her father, who raised her and her sister as a single parent, has also been an important part of her campaign. He even moved back from Somalia–where he has been living part time–to help her run it.

“I’m pretty grateful to have him as a tool to navigate the community,” Omar said, particularly because “people don’t know what to do with the first.”

Omar laughs lightly at this before adding that her father has been a much needed ally. Her husband and her three children are also both engaged and supportive of her run for office. Ten-year-old Adnan introduced her at her campaign launch, and her youngest, could be seen running circles around adults before making a brief appearance on stage during her mother’s speech. For her sanity, she said, her husband is not part of her campaign team (though her sister is). She needs the separation from work and her home life. 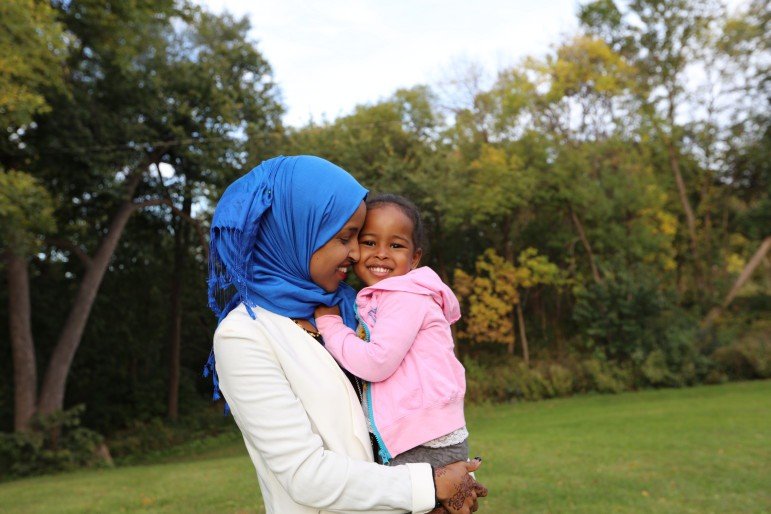 “Because I’m a mom, that makes me concerned for the future,” Omar said. Photo by Conrad Zbikowski.

When asked how she balances all these different roles as a mother, a leader, a wife, and a politician, Omar replied, “All of these roles I’m in are like organs. They’re not things that are contradictory to themselves, they’re things that function together. Because I’m a mom, that makes me concerned for the future. And as a community member and an organizer, I want to change those things that affect me so that’s also part of it, right? Creating policy and being a politician running for office is the realization of all that work.”

This background that informs her present is something that campaign manager, William Emory touched on at Omar’s campaign launch.

“In terms of some places where Ilhan has some courage and conviction, her background (allows her) to really know what we need to do to start looking at how we close some of those very persistent gaps in terms of education and income and access to services,” he said.

What is most appealing about Ilhan Omar then is her humanity and ability to relate to people. Her platform and her ideas are not about abstract ideals but instead informed by her lived experiences, or those of the people around her.

“We need to have a representative who is really capable of building bridges within the various communities in the district. I see in Ilhan someone who is able to connect with people across all those communities,” Emory added.

“I look at my life as borrowed time,” Omar said at the beginning of our interview, “There’s a lot of people I grew up with that didn’t make it. I often feel like we have the responsibility as people who are often marginalized, who often don’t make it to the age of 30…” She trailed off in the retelling, her voice rich with emotion, “It’s upon me do as much as I can do.”

When Omar talks about addressing climate change, she said she is thinking of the ravaged families she saw during the 2011 East Africa famine, where she helped coordinate relief efforts. When she talks about “an economy for everyone” she is talking about the small business owners she knows and who she has previously advocated for, and the individuals who are juggling multiple jobs just to make ends meet, with little to no job security or benefits. When she talks about closing the opportunity gap, Omar is talking about her own children, who as black children in the Minneapolis education system have their odds stacked against them, with a less than 50 percent graduation rate. When Omar talks about fighting for civil rights and equity she is talking about her experiences as a person of color in a deeply racist society.

Omar is done waiting for others to be the change she so eagerly needs. In her own words, “This is the Year of the Woman. We’re experiencing a movement, a revolution. It’s the movement of being bold and not just carving out a space for yourself, but a space wide enough to occupy everyone. That’s why it’s an exciting time to run for office.”

Editor’s Note: This story has been corrected to better describe the types of divestments Ilhan Omar recommends for the state and federal government and to correct the credit for some photos.