When I set out to report on the 117 new, free Wi-Fi “hotspots” in Minneapolis, I ended up sitting in a bed of daffodils. And paying to get online. After several tries and advice from Twitter followers, I had somewhat better luck. Here’s what I learned and what you need to know.

According to the City of Minneapolis’s website, there are 117 “hotspots” around the city where people can check their internet for free.  The hotspots are a result of a deal reached in 2006 between the City of Minneapolis and USI Wireless of Minnetonka.  The 10 year contract between the city and the private company will make Minneapolis one of the first large cities in the United States to go wireless, according to the city’s website.

The website links to  a map with all of the different intersections where these hotspots are located, but the map doesn’t describe any landmarks.  I started at the intersection closest to my house at 31st and Blaisdell, and I was confused because there didn’t seem to be a park or a community center or even a bench to sit on in order to check my internet.  I guess I could have sat on the curb, but 31st Street is very narrow and I was worried my legs might get hit by a car.  At first I thought maybe I had made a mistake about the location, but then I saw the blue sign that said “Free Wireless Minneapolis Hotspot.”  So I sat down in a bed of daffodils, which was still a bit damp from the morning dew, and tried to get online.

No such luck.  When I tried to log on to the City of Minneapolis Public Wi-Fi, I was directed to pay $3.95 on my credit card in order to get 15 minutes of internet time.

So I decided to try out a different location.  I biked over to 35th and Chicago, where the Pillsbury House is located.  This time I didn’t see a sign, but I thought maybe there might a way to get online in the community center.  Nope.  I asked the lady at the front desk and she didn’t know what I was talking about.

Luckily, I asked the Twitter Universe what was going on and found out that I was trying to log onto the wrong network.  Instead of City of Minneapolis Public WiFi, I was told by @bstiteler (Bill Stiteler, a local theater and film artist) that I had to log on via the USIW Free WiFi.

So the next day I biked over to 33rd and Garfield.  The free Wi-Fi sign is located right in front of the old Garfield Aquarium which is now an NSP substation.  There is no place to sit by the sign, but you can walk across the street to a park where there is a bench. Unfortunately, I was not able to get a signal. 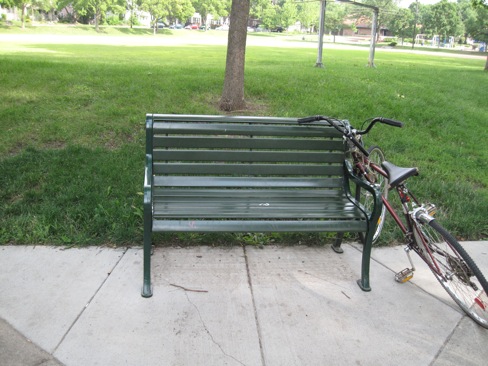 Then, I biked over to 32nd and Aldrich, where there is a convenient bench on the corner (this is the location @bstiteler recommended) and was able to log on just fine.  I had to sign up using my credit card, but once I did that, I could be online for free.  It was actually quite pleasant to be able to check my email in that spot.

I decided to go back to my first location at 31st and Blaisdell, because it is the nearest my house.  Rather than sitting on the ground, I sat on a bench across the street from where the sign is located.  The bench was on the property of Horn Towers, a residential building, so I wasn’t sure if I was allowed to sit there, but I quite enjoyed checking my email in the sun, despite the funny looks I got from people as they walked by me.

I spoke to City Council Member Elizabeth Glidden about the free hotspots and she said they were still a work in progress.  “We’re still working out the kinks,” she said.

Glidden said she had reservations about the rule that people have to have a credit card to log into the network.  The reason for that rule, she said, is because of Homeland Security regulations.  Still, she and other lawmakers are trying to make the system “fair and equitable”.  She also said one of the goals is to provide a “fun service” where people can get online while enjoying the outdoors.

I do see the appeal, and now that I know how to do it, I probably will take advantage of the service, although I think that the city should take care to put public benches in all of the locations that don’t currently have them.  I also don’t really see how the service is necessarily “fair and equitable” or makes the internet more accessible to more people when you have to own a laptop and a have a credit card in order to participate.