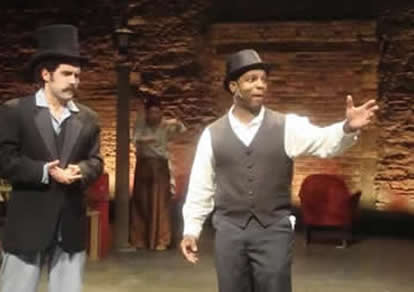 A norm-challenging moment is a terrible thing to waste. No one understands this more than Jeanne Calvit, Dario Tangelson, and Aaron Gabriel.

I took my seat Friday night at The Lab Theater (formerly the Guthrie’s lab space) not sure what to expect. The enormous space was hazy with an overworked smoke machine chugging along in the corner. Characters were sprinkled across the barely lit stage quietly waiting for the audience to materialize.

Stacked boxes, beds, dressers, and other sundry items were stacked in two large piles flanking the stage. It looked as if Katrina had just visited.

Written by Jeanne Calvit and Dario Tangelson in 2005, “Hot Jazz at da Funky Butt” centers on a small group of principal folk-lorish heroes of Jazz during turn-of-the-century New Orleans.

James Europe (Reginald D. Haney) is a foxtrotting band leader of the time who falls to the mercy of the intoxicating sound of an unseen Buddy Bolden’s new sound… the sound of Jazz! With a voodoo priestess, Marie Laveau (Zena Moses), sprinkling her sorcery on Europe and the people of New Orleans the main tension of the show resides in the resistance of the period’s white culture to the new sound, and even more pointedly, heavy recalcitrance to civil rights for the black people.

While there is a weaker love story woven into the greater plot, it’s challenging to grasp onto a focus of the plot. But there’s good reason for that.

“Hot Jazz” is produced by Interact Theater. Their mission is to be “radically inclusive.” The troupe’s members are individuals with disabilities that vary in degree but in no way are allowed to inhibit each member from becoming a full and engaged contributor to the artistic process.

With a handful of the cast comprised of local actors and a transplanted Rue Fiya (a New Orleans R&B group) in concert, the vast majority of the fifty or so person cast are members of Interact Theater’s troupe.

On-stage the result is an almost overwhelming exercise in social justice. While the story addresses racial tension (often with music as the vehicle) with confidence and self-awareness, audience members simply cannot deny the additional dynamic of having person with disabilities deliver this story.

Music and lyrics were written by a very competent Aaron Gabriel. The majority of musical performances have over twenty actors working in cohesion to provide viewers no excuses for disinterest. Transitions between scenes are often painted with extremely active street scenes that might fool even a native New Orleaner.

As I got up from my seat I realized that not only had I witnessed a piece of musical and cultural history, Interact Theater made history with another demonstration of their radical inclusion.

The show’s run ends May 21. Tickets are still available.