Moose and rider Paula Rasmussen get ready to compete at the Minnesota State Fair Horse show.

The bond between Paula Rasmussen and Moose was undeniable. She stroked his neck, he nuzzled her shoulder. Together they were about to show the world, or at least the Minnesota State Fair, that they were a winning team.

Rasmussen, of Minneapolis, rides Moose in the Long Stirrup division of the Equestrian English Horse Show.

Rasmussen’s trainer Alisha O’Dell, of the Ridge Wood Stables in Webster, was at the fairground’s Warner Coliseum Wednesday night giving last-minute pointers. The quiet of the empty barn would soon explode in horsemanship the next morning. Moose and his rider were scheduled in their class bright and early at 8 a.m. with over-the-fence competition of two jumps and one flat jump.

“Depending on how [Paula] does there, she goes into championship or if she has a refusal and is eliminated,” said O’Dell.

O’Dell said there are many entry fees to get Moose into the State Fair horse competition. Each horse and rider pays an entry fee per class. “And then there are stall fees, non-member fees, late fees, every sort of a fee you can think of. It can cost a couple of hundred dollars per class.”

Not only Minnesota horses are jumping at the State Fair. Isabella Tittaferrante of Canada watched Moose and Rasmussen in the silent barn. “People compete from all over the place,” O’Dell said. 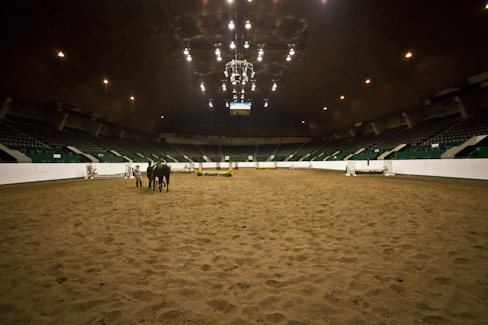 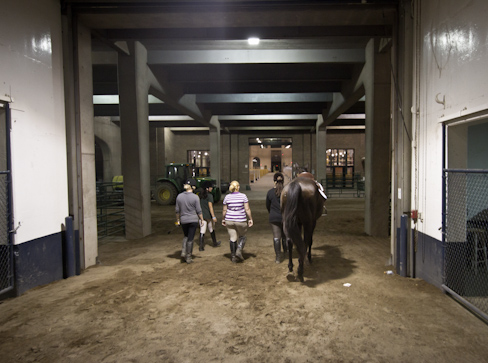 (Above) Moose is led to his stall for a good nights rest before he competes in the Long Stirrup jumping competition early the next morning. 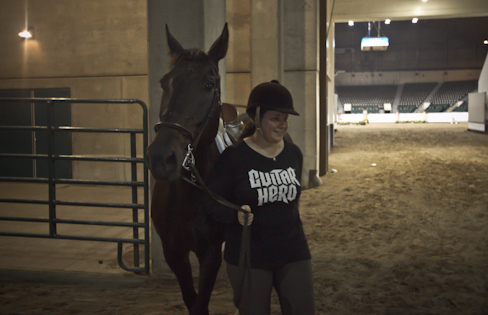 (Above) Alisha and Moose compete as a team in the Horse Show.