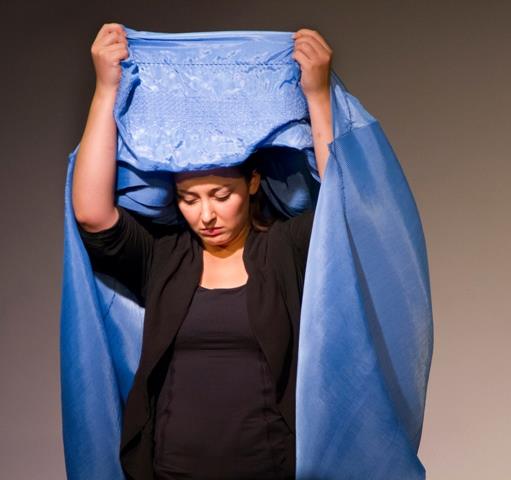 Hope Theater Company opened its first production, Love Letters from Middle East, last weekend—a challenging play that clearly shows the talent of Artistic Director and Iranian award-winning theater artist Kiomars Moradi. After seeing the show, I had some questions of the portrayals of the three women in the play, who are all affected by wars in the Middle East in different ways.

In the first story, Alyssa Perau plays Jamileh, an Iraqi refugee living in England. She’s had her belongings stolen and goes to the authorities to report it. Most devastatingly, the photographs of her family—the only thing she has left of them—are lost. But when she speaks with the officials, they demand to know her identity, which she cannot prove. In the second story, Emily Rose Duea plays Goli, a woman who has had acid thrown on her face and seeks financial assistance for herself and two other women. The last story features an American protagonist, Angela (Meredith Larson) who, after learning her military husband has gone missing, travels to Afghanistan to find him.

Besides the three actresses, the production uses two dress forms, which the performers use to create other characters. They drape clothes on the dress forms and speak to them. The technique has quite an eerie effect, where the dress forms become very ghost-like and add an extra layer of meaning especially in the second two pieces. In the second piece, the two forms are dressed in body coverings with veils that cover everything but a screen. They become voiceless women, powerless to speak or to add their own version of the story. In the last piece, Angela’s husband’s uniform and boots turn in a ghost.

The script, written by Kiomars Moradi (also the director) and Porya Azarbayjani, contains poetic language and is packed with emotion. One problem with it though is that the three stories tend to stay on the same emotional pitch. The stories are all sad and there’s a lot of crying involved, which isn’t necessarily a bad thing, but there could have perhaps been a bit more variance in the dynamics. The other problem is that the play, written by two men, portrays these women—especially Goli but also the other two—as victims. I wished that there were more of an opportunity to see the strength of these women. That strength is inherent in all three of the stories. In each you have a woman fighting for survival in some way—but somehow in the directing and acting, you didn’t really get a full sense of their power.

Goli’s story is also the most controversial of the three because it seems to portray a negative view of the veil itself. It becomes a symbol for the violence suffered by the women. I get on murky ground here talking about this because I’m a white woman talking about stuff I don’t totally understand, but I’m pretty sure there are many proud Muslim women here in the Twin Cities who don’t see traditional veils and head coverings as oppressive, and might take offense to this piece, but I’m not sure. Please weigh in the comments if you’ve seen the piece.

Despite these quibbles, however, I did enjoy the play (I should mention the music is fantastic), and am looking forward to seeing what’s next for Hope Theater. Clearly, this is a talented group of artists, providing a unique voice in our Twin Cities community.