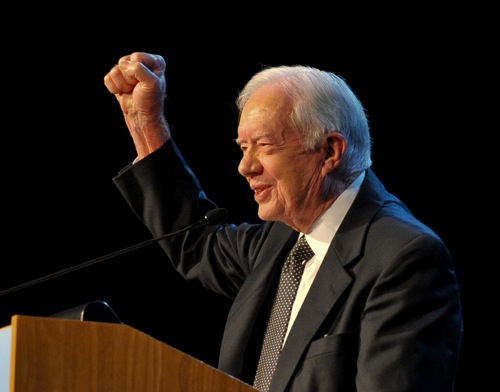 TC Habitat for Humanity’s goal is to use the $36 million from the new campaign to repair 730 homes in Minneapolis and St. Paul and serve a total of 5,200 families by 2014. A World of Hope: It Starts at Home has already raised $16,329,591 million from supporters including Wells Fargo, Thrivent Financial for Lutherans, General Mills, Brad and Janet Anderson, and former Cargill CEO Warren Staley and his wife Mary Lynn.

President Carter had arrived in the Twin Cities on Wednesday morning and spent the day on site in North Minneapolis, helping build for the week-long Carter Work Project.

While the new campaign was the subject of the Wednesday evening gala, President Carter’s speech mainly focused on the importance of Habitat for Humanity over the years and humanity’s responsibility to care for those less fortunate.

Carter began his speech saying that whatever one’s beliefs, it is the responsibility of the “rich, secure, and fortunate to reach out to those who don’t even have the basic right to a decent place to live.” He also praised Habitat, saying it was different from other organizations because “It isn’t a charity organization at all.” Carter then explained to the audience how the homebuyers of Habitat for Humanity homes have to put their own hours of labor into the homes as well as buying the completed homes. Habitat homebuyers have a 30-year, zero interest mortgage.  This, Carter said, is “how someone who is even on welfare can work hard and make the payments.”

Carter’s speech was short and full of humor, discussing how they had to finish one of their projects early in Mumbai, India (where his mother served in the Peace Corps when she was 70 years old) because Brad Pitt came and “caused a ruckus.”

President Carter’s speech was followed by a performance by Jazz musician T. Mychael Rambo (who announced that “hope is back in the Twin Cities” with the arrival of Carter), dinner, and speeches by Wells Fargo CEO John Stumpf, General Mills CEO Ken Powell, Thriven Financial for Lutherans CEO Brad Hewitt, and former Cargill CEO Warren Staley and wife Mary Lynn.