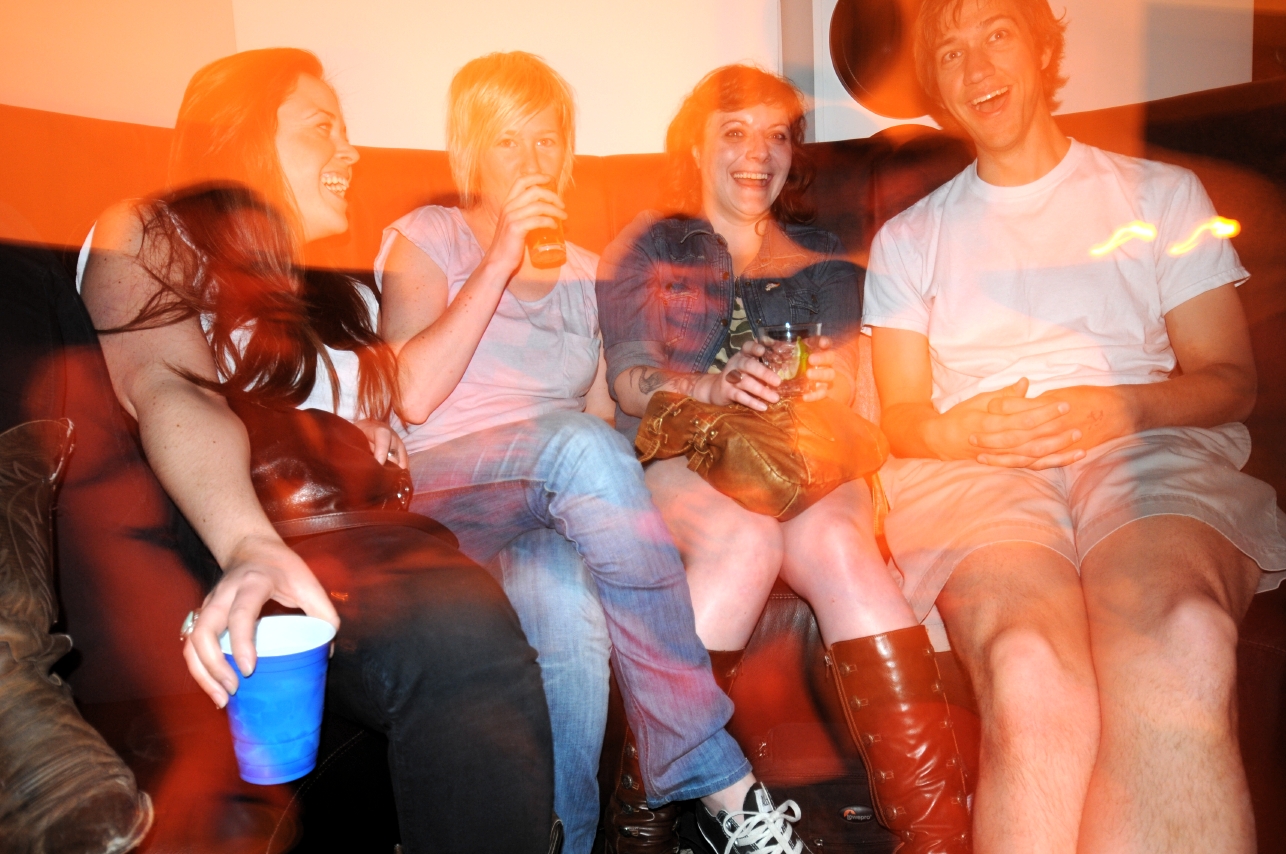 Way back in the dead of last winter, I gave you a bunch of my recommendations for cool places to hook up with single men and women. Now, in the heat of summer, with a plethora of new places open (or opening soon), festivals galore, and more to do now with increased mobility sans ice and snow, I offer you a few new recommendations (to add to the former lists, which are still solid—except for Stasiu’s, which is now cinders). First I’ll reiterate a few places that have changed a bit or remain the strongest sources on your list of go-to places to meet men and women.

First and foremost, I reiterate that the Turf Club rules as one of the best places to enjoy yourself, listening to live music, hanging out (and perhaps making out) in the Clown Lounge. There are new things happening in the Clown Lounge, such as circus nights (look on the website for Clown Lounge nights). Mind-bending psychedelic pins of light shoot all over and around you while you dance to DJ music that makes your body and mind groove. Also, bartender/programmer Dave Weigart spins from his fabulous collection of 45s. The Clown Lounge is one of our town vortexes (I’ll get to the other vortex later). Vortexes are good for meeting and getting to know new boys and girls, because you spend such significant amounts of time there, you could be engaged, or at least to third base, by the time you get out of there. More often than not, you’ll forget to go upstairs to listen to the live band because the vibe is so chill and it’s fun talking with new people there.

Nick and Eddie, mentioned before, is even more fun, and where the cool people hang out—especially on nights like Wednesdays (when Marijuana Deathsquads, a supergroup of various phenomenal TC rockers—perform) and Sexy Mondays. If you want to beat the weekend crowds and meet people on a weeknight, here is the place to go.

Bedlam Theatre. Alas, after August 30, Bedlam will not be in the same beautiful building, with the romantic patio under the stars with the best view of the city skyline. So, hang out here while you can, revel in the 5-week-long party that is a virtual blowout, the equivalent of a fireworks finale, with fellow fans (or latecomers) to one of our most fantastic theater/music/arts venues in the Twin Cities. It’s very casual, laid back, and easy to engage another in conversation here over great food and drink. If you are shy and feel like you don’t have a good starter, just do a touch of research and talk about “the Hole.” Of course, conversation about the Hole can lead anywhere for those of you who like double entendres (who doesn’t?). There are also Bomp! dance nights, Full Moon Cabarets, and much more, including an all-Hard-Times-Cafe-related bands showcase the last night. Yes, you’re right! That would be nearly 10 bands! You get to listen to the awesome punk music by the guy who makes your favorite late night hash browns, while you mosh with your new sweetheart punk rock girl/guy.

Places not on the prior lists:

Palmer’s Bar: the other vortex. While you’re on the West Bank, you’ll want to hit Palmer’s for a beer or a Jameson. A warning: do not make plans to meet up with someone you’re into who is elsewhere after “just one beer” at Palmers. Because there is no such thing, because Palmer’s is a vortex. I’ve actually drawn up a map/game depicting ways to leave Palmer’s. (You’re right, you don’t leave. But you might win in that you’ll certainly get to “know” people there.) Now they have an excellent roster of music, Wednesdays through Sundays—and if you feel like getting dirty, there are dirty blues galore in this authentic, old juke-joint-feeling place. You’ll see and meet people from all walks of life, and all over the city drawn to the music. You’ll occasionally catch Chooglin’, who will make you feel like gettin’ it on, and the Fuck Knights, who’ll drive you crazy with their wild antics. Often as not, you’ll see bands (or staff) dancing on the bars and that will also drive you wild. And you’ll quickly gain liquid courage from the notoriously large, cheap pours, paving the way to inroads with the cutie you’ve been eying from afar.

First Avenue 40th Year Anniversary: As if this were even possible, First Ave kicks it up several notches, with even more phenomenal nights of rock, punk, garage, and Americana music with special reunions of Twin Cities stalwarts, too. Not to be missed: Dark Dark Dark CD release in October, and a two-night Suburbs/Suicide Commandos show in November. This is the place for music lovers to unite!

Barbette: Bar none, the most romantic place in the Twin Cities. Great to go alone, and hang out over decently priced wine and delicious apps and food, so beautiful you feel like you’re in a Parisian café, and feel romantic buzz all over your skin, while your senses revel in delight with the lighting and décor and great music. Easy to be open and meet others who may be open to meeting someone at the bar or table near you—in a respectful way—and if they seem interested, relax and enjoy together. Who knows what will happen? Que sera sera!

Club Jäger dance nights. So fun. Such sexy people on the dance floor. Dancing with sexy people to groovy music—what better way to make your way with some cutie you see and like the way they shake their thang?

Speaking of Club Jäger, and LOL/OMG…Mark Mallman. Yes, I know Mark Mallman is not a place. But he is an institution when it comes to a guaranteed good time. Where this extraordinary musician—one of the best to see perform live, and to dance to—Mallman goes, you should follow, whether he’s DJing at Club Jäger, or performing with his new scintillating Waxx Maxx band for LOL/OMG at 501 Club August 5, or doing his not-to-be-missed-its-been-too-long marathon in the fall. And, during a 36- or a 52-hour marathon, of course you have plenty of time to get to know your prospective mate quite well. Just beware of the Mallwolf.

Cause Spirits and Soundbar: a great place to hang out on Lake and Lyndale, see great shows, drink, dance, and later go to cozy, romantic Moto-i just down the street for some homebrewed saki.

Uptown Bar (in old Theatre Antiques space): soon to be open, in the late winter. The Uptown Bar will now have the same programming you loved before, but now with two stories (one is a mezzanine) and capacity of 700 people. All the more to meet and get with.

Varsity Theater: Have you seen the new mezzanine?! The Varsity has always remained solidly one of my favorite venues in terms of romantic setting, lighting and sound. Now, they’ve outdone themselves and created a mezzanine, and a magically beautiful romantic environment remniscent of New Orleans, or ancient Rome or archaic Paris…I’m speechless. I have a feeling that owner/designer Jason McLean’s modus operandi is to get his audiences to fall in love—I know he likes to be considered a master of creating great make-out spaces. If you can’t fall in love with someone here, I just don’t know what to say.

Ritz Theater: I’ve attended some of my favorite events here, such as Heliotrope and burlesque (which will get your blood going). Again, a very romantic theatre, harkening to the old world, in a lovely historic building and awesome room. Its great to hang out in the lobby or alley, and later nosh at Modern Café or…

Anchor Fish and Chips: A great social setting which is not only the best, most authentic “chipper” in the states, but also, there is hardly a time (of too many to count) when I haven’t had someone strike up a compelling conversation at the counter. It is a happy place, and it’s fun to meet people and chat over a Guinness or three. Arrr, the Irish know how its done. Maybe the luck will rub off on ya!

And…13th Avenue Northeast in general. Anchor Fish and Chips was considered the clincher for making 13th Avenue a destination, according to Michael Tortorello in the New York Times travel section. Along with the Ritz and the Anchor, other spots I noted to meet men and women, such as the 331 Club, the Rogue Buddha Gallery, and the Peacock Lounge were noted. Also of note: Northeast Social, which opened since my last piece—a sweet spot for a drink and delicious food, with friendly service and a nice view of the stretch of this quaint, small-town-looking street.

And, speaking of entire streets…attend street festivals and block parties! We have so many! You’ll likely run into your type again and again, all around town, and have much ground to form a conversation on, and move on down the road with them from there.

Off the beaten path: Dinner on the Farm. For people who love good food, are into the local food movement, and want to see a farm and where there food comes from (and who doesn’t fit into one of these categories?) this is a great way to meet fellow food enthusiasts.

Photo: Just a few of the beautiful people to be spotted at Nick and Eddie. Photo by Meredith Westin.