It was an amazing sight. Hundreds of police cars from dozens of jurisdictions covered every street near the Cathedral. Thousands of police officers, sheriff’s deputies, and state troopers, stood shoulder to shoulder around the Cathedral. They all came to honor slain Maplewood Police Officer Joseph Bergeron. Bergeron was killed in the line of duty.

Citizens also came to show their respect. Parents stood beside their small children while they waved miniature American flags. Aside from the occasional barking dog, everyone stood in silence. 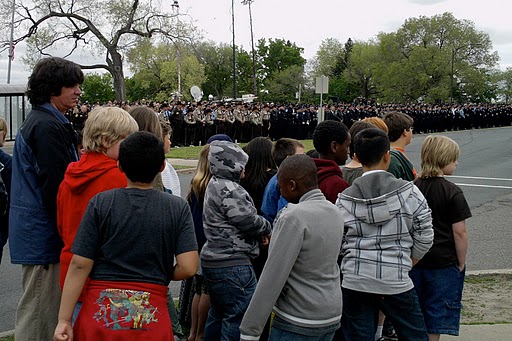 John Mayock, a 5th grade teacher at Capitol Hill Magnet School put the regular classroom routine on hold and brought his students down to the Cathedral.

“This is better than any civics class I could teach,” Mayock said. 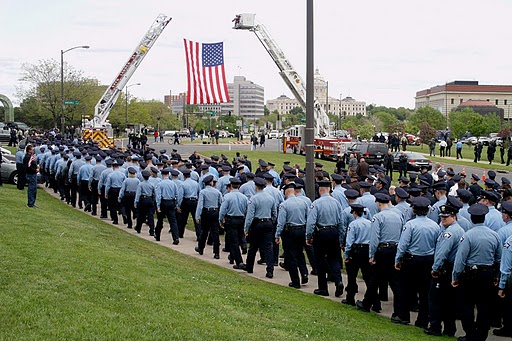 The church doors opened and hundreds of uniform officers walked out in silence. In unison, the officers saluted as the urn holding Officer Bergeron’s remains was carried down the stairs. 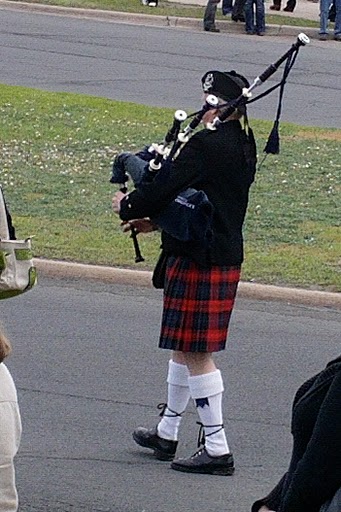 Then, the officers all walked down the street in formation followed by one lone Scottish bagpipes musician. The crowd watched in silence.

Later, inside D’amico & Sons on Grand Avenue, I saw two police officers sitting at a table having lunch. One officer had two bruised and swollen eyes. I recognized him to be St. Paul Police Officer David Longbehn, the officer who fought and ultimately killed one of the assailants who killed Bergeron. I walked over to shake his hand.

“Thank you for all you do to protect us,” I said.