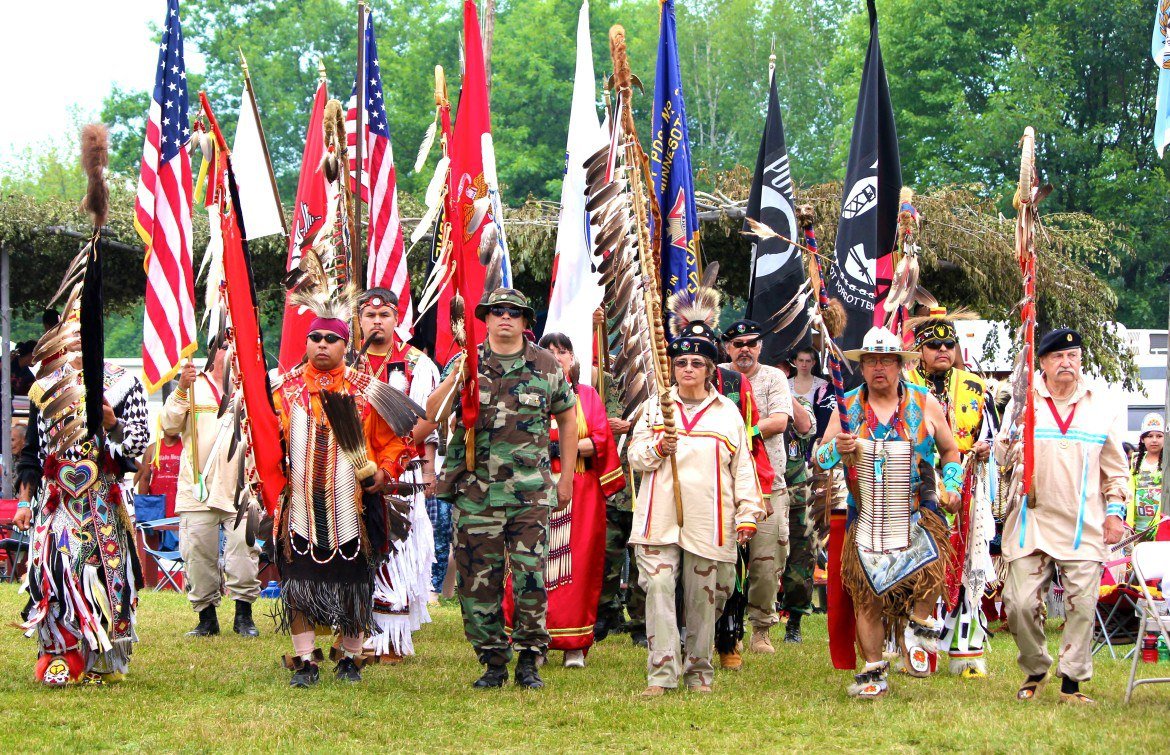 Veterans honored during the Mash-ka-Wisen Sobriety Powwow in August 2014. Photo by Ivy Vainio.

Stephen Yellowhawk grew up on the powwow circuit, traveling across the United States and Canada with his family. As a young boy, this son of the Lakota and Iroquois Nations was fascinated by the athletic, flashy style of the Fancy Dance (also known as Fancy War Dance), and the men who performed it wearing stunning, elaborate regalia: feather bustles, bells, roach rockers, beaded cuffs and moccasins. He would watch breathlessly as the dancers entered the arena following a color guard bearing eagle feather staffs and American flags. The Fancy Dance, young Stephen learned from his elders, was performed to honor the heroics and sacrifices of the warriors and veterans.

While other kids might have fantasized about hitting baseballs like Babe Ruth, Yellowhawk grew up emulating the legendary fancy dancers who invented the genre in the 1930s and 1940s. Men like Stephen Mopope (Kiowa), Dennis Rough Face (Ponca), Chester Lefthand (Arapaho), and George “Woogie” Watchetaker (Comanche); Elmer Sugar Brown, who added back flips to his fancy dancing; and Gus McDonald who added both cartwheels and splits.

Yellowhawk got his first opportunity to dance when he was barely old enough to ride a bike. That first powwow took place in Rapid City at the Rushmore Plaza Civic Center. He still recalls the pride he felt dancing behind the flag-bearing Native veterans as they entered the arena during his initial grand entry.

“From the time I first became a fancy dancer I understood that I was honoring our warriors and our veterans, both past and present,” said Yellowhawk, who is now in his sixth year as president of the Black Hills Powwow Association. The Black Hills powwow, today one of the largest in the United States, takes place each October at the same Rapid City arena where Yellowhawk initially danced as a child.

“A lot of our people have put their lives on the line for this country,” Yellowhawk said. “We hold that in very high regard, which is why we always start our powwow by honoring the warriors. They are the ones who have fought to keep our culture alive, to give us the freedom to celebrate life, and to celebrate our culture.” 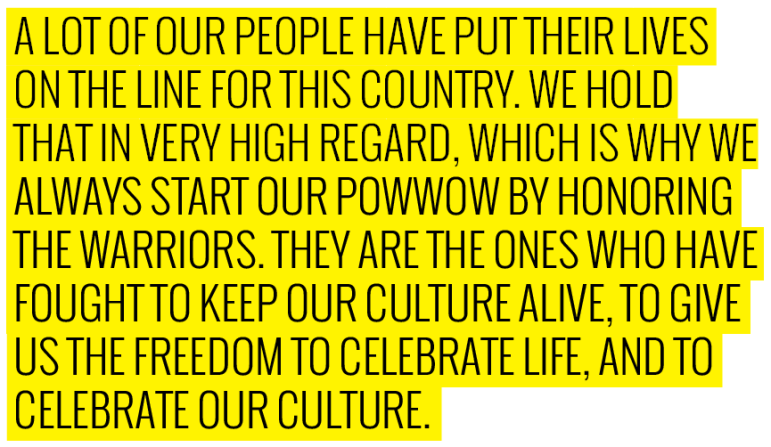 Yellowhawk and the other members of the powwow association stress that all are welcome to attend–a healing message for a city with a long history of racial strife.

“It doesn’t matter if you’re Native, non–Native, what tribe you’re from, what part of this community, what part of this nation you’re from—everybody is welcome,” he said. “It doesn’t matter if you’re wearing regalia or not. If you just want to get out there and dance, you like the sound of the drum. You don’t have to be native to come out and dance.”

The inclusive messaging draws many non-Indians to the Rushmore Plaza Civic Center. For some of these curious spectators, the powwow is their first exposure to authentic Native American culture. Inevitably, the impressive pageantry inspires questions. Among those most commonly asked is this: Why would Native Americans, people who have suffered hundreds of years of colonization and genocide, honor the United States military and the American flag at a cultural celebration?

Emmy Her Many Horses of the Sicangu Lakota has heard this question many times. Her Many Horses, who grew up on the Rosebud Reservation in South Dakota, is renowned for performing the United States National Anthem in the Lakota language. Hundreds of Native American veterans have received copies of the translated Anthem on CD. In 2011, she was one of 11 Native American young people honored by President Obama as a “Champion of Change.”

Her Many Horses said the anthem project has been motivated by a desire to honor those who have fought to “defend our people, and where we come from.” This includes, she said, Native people and other U.S. citizens.

She said there are a great many reasons why Native people choose to join the U.S. military, but that regardless of their motivation, they should be recognized for having served.

“For Native people there is a difficulty in trying to remain true to who we are from our tribal nations, and who we are in society today. For some, I think, they are seeking to be that warrior. For others, the military may be their best chance at getting away from their homes and finding opportunity. The military is also an opportunity that will help pay for school, allow travel, and teach new skills. Many are following a family tradition, a cultural tradition.”

The involvement of Native people in the military goes back hundreds of years. Considering Indians were involved in the American Revolution (and every subsequent American conflict), indigenous people have been fighting for America since before it was a country.

According to the Department of Defense, 22,569 enlisted service members, and 1,297 officers on active duty, were American Indian as of 2010. Considering the population of the United States is approximately 1.4 percent Native, and the military is 1.7 percent Native, indigenous people have the highest per-capita involvement of any population serving in the military.

“I grew up in a community where I learned to respect those who made that choice to serve. We all were touched in some way by the military. We all have family who served. We all love someone who served,” Her Many Horses said.

Her Many Horses knows that the inclusion of patriotic expressions at Native cultural gatherings does not go over well with everyone. She said she has lost friends who objected to her Anthem project.

Joe Perez also of the Sicangu Lakota and a Minneapolis-based powwow MC, is among those Native people who would prefer not to see the American flag flown over their traditional homelands. Perez compares his gut reaction to seeing the American flag entering a powwow grounds to what he imagines a Jewish person might feel when viewing a swastika. “Our people have been so influenced by messages coming from the dominant culture that we fail to see the flag for what it is—a symbol of our own oppression,” he said.

Perez believes that Native people who embrace the American flag suffer from a form of Stockholm syndrome, the psychological phenomenon in which hostages express empathy and sympathy toward their captors, sometimes to the point of defending and identifying with their captors.

“Of course, joining the military can be a legitimate way for Native people to become warriors,” he said. “If indigenous nations had our own militaries, however, joining the American military would be treasonous. You don’t have to join the military to be a warrior, you just have to contribute to the good of your people.”

Perez enjoys attending professional sporting events, such as the Minnesota Twins at Minneapolis’ Target Field. He refuses to stand when the National Anthem is played, which sounds, to his ears, incongruous in the land of his ancestors. He said it would be more appropriate to hear a prayer song honoring the sacred pipe.

“I remain seated because I’m a Lakota person being oppressed in my own homeland by foreign intruders,” he said. “They have no connection to this land, and yet they’re trying to make me sing their most patriotic song.”

As a single father of 12 year-old Mariah, Perez teaches his daughter to stand at school during the Pledge of Allegiance “out of respect for her classmates,” but insists she must never recite the words as he believes the Pledge is a form of political indoctrination.

“People will think and say what they believe,” said Her Many Horses, who has heard every imaginable response to her National Anthem project. “We all have that right to do so. I made a choice to do something I cared about, for people I cared about,” she said.

As a child growing up on the Pine Ridge Reservation, Von Gillette of Arikara, Hidatsa and Lakota ancestry remembers watching many powwows and swelling with pride as the flags were carried in. He associated the American flag and the uniformed veterans who brandished them with the military service of several close relatives, including his grandfather, father, and uncles.

“They would bring in the American flag alongside the tribal flag and the POW/MIA flag. The three seemed to be working in conjunction. I didn’t really question it. I associated the flags with the veterans I knew. I thought of them as honorable, and so the American flag was something I respected.”

As a 10-year-old, Gillette recalls the moment he began to question the actions of the military and the political leaders who wielded its massive power. “I watched on television as the U.S. military bombed the Iraqis, and something about it made me suspicious. I began to see a connection between what the military was doing in Iraq—seeking to take another nation’s oil resources—and what it had done to Native people.”

Gillette was further disillusioned by the stories elders told of the military invasion of his reservation during the 1973 Wounded Knee occupation. “U.S. law said the military cannot be deployed on U.S. soil against U.S. citizens. But that’s exactly what they did in 1973 when they surrounded Indian people—U.S. citizens—who were occupying their own land. I have never been able to make sense of that.”

As an adult Gillette settled in St. Paul and established a successful business training athletes. He also began to take a more critical look at the actions of the U.S. military in Iraq, Afghanistan, and around the world as the War on Terror intensified following the Sept. 11 attacks.

Today, Gillette said, he is neither pro- nor anti-military, but has formed opinions based observation of the military’s actions. “What the U.S. military has done around the world in the past two decades has been disastrous. They have killed hundreds of thousands of innocent people. I don’t have any respect for that. But I don’t blame veterans; I blame the politicians in the White House. I have a lot of relatives who have served and I respect them absolutely. It gets confusing. But that doesn’t mean I have to have an all or nothing attitude.” 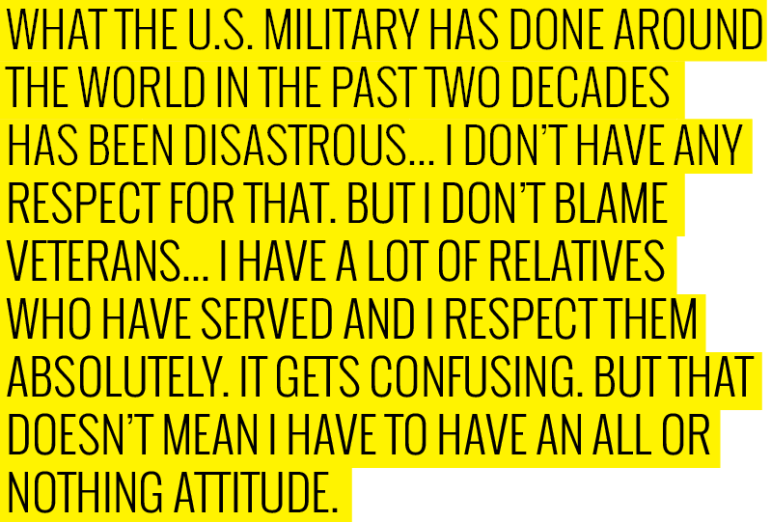 If it were up to him, the indigenous nations of America would cease raising the American flag until the government follows through on its treaty obligations. Gillette wants to see the restoration of the Great Sioux Nation (as described in the Fort Laramie Treaty of 1868), the return of the Black Hills (which were removed from the Great Sioux Nation following the 1877 treaty), and an honoring of every other treaty signed by the United States.

“I have a hard time using a flag which pays tribute to a country that doesn’t uphold its basic legal agreements,” he said, at the same time expressing sympathy for those Native people who originally wove the flag into cultural gatherings. Gillette said it was a matter of basic survival.

“At one time powwows were illegal, but one of the ways you could have a powwow was to fly the American flag; it was like a white flag of surrender that said: ‘Please don’t kill us while we practice our cultural traditions.’”

“So I can understand how the American flag became part of the powwow culture,” Gillette said. “But I think its usage should be seriously re-examined, and I know a lot of Native Americans feel exactly the same as I do.”

This story was produced in partnership with The Circle News.