For two of Thursday night’s award winners, the night was an anniversary. The evening also gave us a glimpse of the lives we don’t necessarily see when we watch them at work or in service to the Northeast community. It was the Northeast Celebration, An Evening of Business and Community Awards, co-hosted by the Northeast Minneapolis Chamber of Commerce and the East Minneapolis Exchange Club.

Joe Hatch-Surisook quipped that his wife Holly sent him to pick up their award since he’s the better looking. Back at their restaurant, Sen Yai Sen Lek, all were celebrating the third anniversary of opening “big noodle little noodle.” So after thanking his nominator and the chamber for all they do, he headed back to 24th and Central. “We have a 10-year lease, so we’ll be there at least seven more years,” Hatch-Surisook said.

Leslie Watson explained how the Hatch-Surisooks not only fulfilled their longstanding dream, but employ 23 full- and part-time staff, mostly from the surrounding neighborhood; have won great reviews, and most importantly, have as their mission and core values a community orientation. “2008 was hardly an auspicious time to start a business, but they filled a gap and brought Thai food with a vibrant visual addition to the Avenue…a warm and glowing interior,” she said. Sen Yai Sen Lek is the small business of the year.

For Kristine Reed of Be The Match registry (the National Marrow Donor Program), this is close to the anniversary of the life-saving transplant she got from her sister when, at age 25, she was diagnosed with leukemia. “Seventy percent of those diagnosed do not have a donor in the family,” explained Edie French in reading the nomination for Be the Match as the large business of the year. 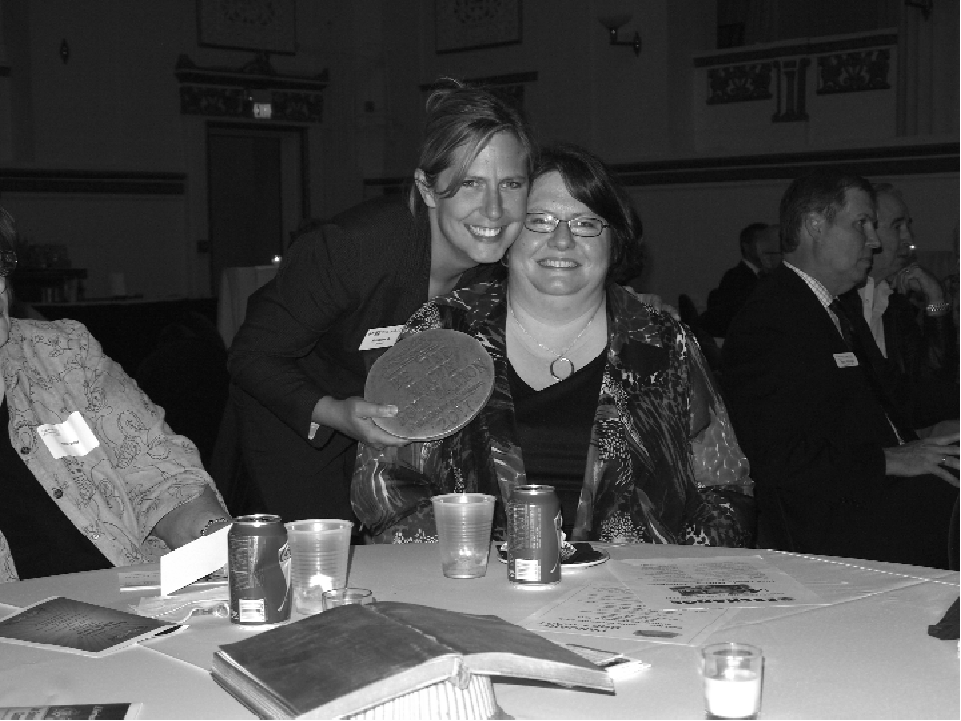 Reed said it’s “almost 13 years ago today” that her sister saved her life. Reed is devoting her life to making others aware of the need, and introduced her “new boss, Betsy Ward, Regional Director for the Midwest.”

There are more than 700 employees at the national headquarters of Be The Match in Northeast at 3001 Broadway St. NE and still “we need all the help we can get to promote in this area,” Reed said. At the East Minneapolis Exchange Club Pancake Breakfast Nov. 6, Be The Match will have a drive for potential donors.

The Chamber awards also included Press Sure Print, medium sized business of the year, characterized as very self-effacing. The company, at 2607 6th St. NE, press-sure-print.com, has contributed to the Chamber, the Lions, the Goldbricks, and Royalty. They have been recognized by Printing Industry of Minnesota, said their nominator.

Christine Levens received the President’s Award, and quipped that this award often goes to someone who’s retiring, but “I’m not leaving.” She serves the dual role of Northeast Minneapolis Chamber of Commerce Executive Director and Events Coordinator for the Minneapolis Regional Chamber of Commerce. She teared up when crediting her mother and grandmother, sitting in the audience.

The East Minneapolis Exchange Club awarded the Book of Golden Deeds to Eileen Hafften, whom we know as the Executive Director of Northeast Dinner Bell, the Meals on Wheels program for Northeast and St. Anthony. She’s found that volunteering for other organizations (such as the Hotdish Revolution) has helped her recruit people to help with Northeast Dinner Bell. She and husband Ken have been involved with the Minneapolis Aquatennial for 31 years, she was a Vice Commodore.

They explained in conversation that they were really active with Aquatennial when their family was quite young, then their interests turned more to the kids’ school activities. Eileen served on the 2012 Queen of the Lakes Committee. Aquatennial has changed quite a bit since it was taken over by the Downtown Council, they said, dividing the ambassador functions from the festival functions.

The 2010 Police Officer of the Year is Jesse Standal. In introducing him, Inspector Bryan Schafer said it was Standal who uncovered the March 2010 rash of auto thefts by tow truck, involving 30 autos that had been taken and crushed. “It was the lead story on the news for a couple days.” Then describing a recent action in which Standal and his partner collared two suspects and think they’re close to getting a third who was involved in a rash of burglaries, “It’s not like you see on TV, [that you catch a criminal in the act]. It may happen once a lifetime.” It’s happened already to a young officer who started in 2007 as a Community Service Officer and since 2008 has served on the “dog watch.”

Schafer said Standal follows up on cases, and gets in early to catch up on what’s been going on prior to his shift. “He works with other units,” keeping in touch even when off duty, to move cases forward “and keep in mind, he works at night. … He’s firm, fair, kind, compassionate. He has street sense, and he’s humble. He’s answered 1,500 calls, made 250 arrests, and warned 317 without issuing citations,” so he has a soft side, too, Schafer said.

For more information on the Northeast Minneapolis Chamber of Commerce, call 612-378-0050 or look on the web at minneapolischamber.org. For the East Minneapolis Exchange Club, email ExchangeClubMpls @gmail.com or visit a weekly lunch meeting Wednesdays, 12:15 p.m. at Elsie’s, 729 Marshall St. NE.