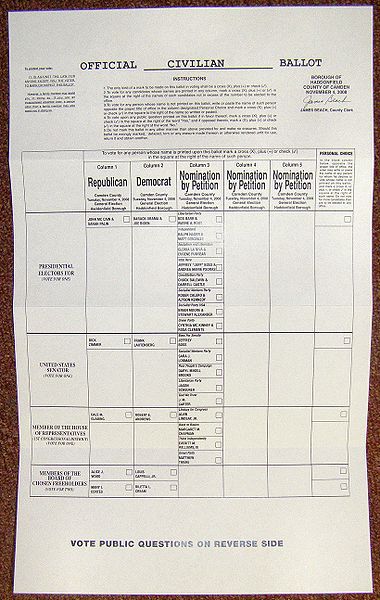 This is an Absentee ballot for the 2008 United States General Election for the Borough of Haddonfield in Camden County, New Jersey taken from Wikipedia.

It is tough for a student who attends college out of state to try and decide where he or she should vote. Should they make their voice heard in their hometown or their college town, an area that is affecting them in the present? When several University of Minnesota students not native to Minnesota were asked where they were voting, all four of them replied that they were voting absentee in their hometown.

Amanda Noventa lives in the Twin Cities, but she’s a Brazililan citizen. Read her story of travelilng 400 miles to cast an absentee ballot in this year’s Brazilian presidential election.

The students’ reasons varied. Kyle Symanski, a U of M sophomore from Chicago, said that he wasn’t going to vote in Minnesota because he did not plan on residing in Minnesota after college. He is voting absentee in Chicago because all of his family lives in Chicago and he plans to move back there when he graduates.

Laura Peterson, a U of M sophomore from Wyoming, spoke for the interviewees when she said she is voting absentee for her state because “I do not know enough about what Minnesota needs politically to make an educated vote and I do know exactly what Wyoming needs representation wise.” Peterson also said she chose her home state over her college state because,”My family still lives there and my brother is still going to high school there. I would really like to vote here and make a difference because I am here now, but I have a stronger tie to Wyoming and care more about its future.”

The students interviewed said that they received help and a push from their parents to vote absentee, and are not exactly sure how to complete the process themselves.

The process for absentee voting varies slightly by state. Registered voters in Wisconsin, Iowa, and Illinois can apply for an absentee vote without stating a reason, while Minnesotans must give a reason. In Minnesota and Wisconsin a voter can send in an application requesting an absentee ballot electronically, while Illinois only accepts applications through the mail unless the voter is in the military or overseas.

The Minnesota’s Secretary of State website has information on absentee voting in a number of languages, including Somali, Spanish, and Vietnamese. Minnesota, applications for absentee ballots are due, at the latest, on Thursday, October 28.  Minnesota strongly urges voters to get their applications and ballots in as soon as possible.

People who are serving for the military or overseas are required to fill out the Federal Postcard Application which can be completed through the Minnesota Military and Overseas Voter Service online.

In Minnesota voters who are disabled or are patients in hospitals, residents in nursing homes, treatment centers, women shelters, etc. are able to call on an agent to deliver their absentee ballot. The agent must have a preexisting relationship with the voter and is only able to serve as an agent for up to three voters. To do this you must complete the Request for Agent Delivery of Absentee Ballot Form along with the Absentee Application online.

Of course, a person can only vote in one state. Students who do not plan to vote absentee for their hometown may vote in Minnesota election if they have lived here for at least 20 days. They can register on Election Day and find their voting location here: http://pollfinder.sos.state.mn.us/ .