Graphics are from Wilder's report: Homelessness in Minnesota

Almost half of all the homeless people in Minnesota are children and young adults (under 21), and another 23 percent are women. That’s what the Wilder Foundation’s 2009 statewide survey of homeless Minnesotans found.

In a May 25 conference at Wilder, Paul Mattessich explained that Wilder’s statewide survey, carried out every three years, is a snapshot in time. Trained volunteers fan out across the state, counting and interviewing homeless people. They ask about the causes, circumstances, and effects of homelessness on the individuals surveyed.

In 2009, the volunteers counted 9,654 homeless children, youths and adults. That’s 25 percent more than three years ago – or six years ago – or nine years ago, It’s also less than the best estimate of homeless Minnesotans, which is 13,100. 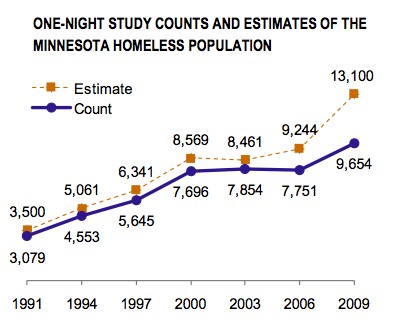 The increase in homelessness was greatest among young people:

Beth Holger-Ambrose, Homeless Youth Services Coordinator, Department of Human Services, said that all programs for homeless youth “have taken a big hit” during the past few years. “There has been a huge rise in the number of youth experiencing homelessness but we have not been able to increase the number of shelter beds. … It’s heartbreaking.”