Statistics on race and homelessness from Wilder's report: Homelessness in Minnesota

Richard Amos is the housing services director at St. Stephen’s Housing, so he knows homelessness from the perspective of a service provider. But he also knows it f rom the other side. At the Wilder Foundation’s forum on May 25, Amos told his story:

I was homeless for 20 years and in and out of drug addictions and prison and jail. The last time I was locked up, I decided to change my life and go another way. St. Stephen’s gave me my first job (moving furniture). I had never really worked before, and no one in my family had, so it was new to me.

From that first job, Amos moved ahead, becoming a case manager while in college, and now directing the program. He sees race as a key factor in homelessness, and describes situations he has seen:

When I have European clients, they need almost no help, even if they have a serious past with convictions, bad credit, and so on.

One landlord said, “She sounds like my niece, she had a lot of problems and she straightened out.”

Black people deserve that chance, too.

The Wilder Foundation’s 2009 survey of homeless people in Minnesota found that people of color are over-represented in the homeless population: 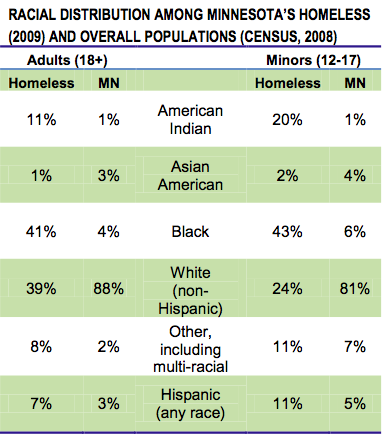