“The cool thing in rural areas is we are related to everybody – like the mail carrier or the guy who drives the grader down the road,” and that makes it possible to ask where there’s a boarded up house or somewhere else that homeless people may be located, said Liz Kuoppala, director of the Minnesota Coalition for the Homeless. That’s important, because homeless Minnesotans in rural areas usually are not found in shelters. 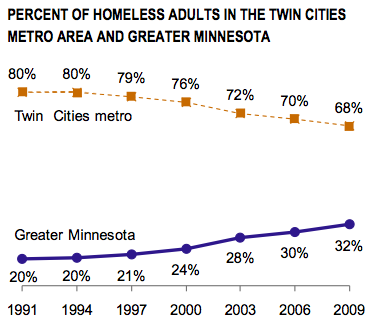 Graph is from Wilder’s report: Homelessness in Minnesota

“We need more shelters,” Kuoppala said. “Maybe in metro area we have enough shelters and the job is to rehouse people. but in greater Minnesota, we don’t have shelters, and we need them. Imagine – if there were no shelters and no transitional housing – that’s what we are faced with in rural Minnesota. It can be hundreds of miles to a shelter.”