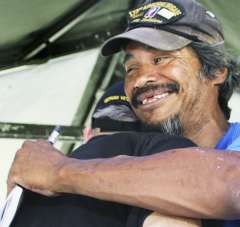 Joseph Jennings sat under a camouflage green Army tent patiently awaiting a haircut Friday. The 23-year-old is an Army veteran who served on the front lines in Operation Iraqi Freedom, but, after coming home, developed a drinking problem and couldn’t hold a job.

He is one of the nearly 500 veterans who came to Stand Down 2006 on Aug. 3 and 4 on the West Bank’s recreation fields looking for resources to get their lives back on track, said Kathleen Vitalis, executive director for the Minnesota Assistance Council for Veterans.

Stand Down is a program the the council organized to help homeless or nearly homeless veterans by providing them with services and resources such as medical assessments, haircuts, legal aide, substance abuse information and food.

Jennings said he needs a job and a permanent place to live and suffers from post-traumatic stress disorder from the war and brain injuries unrelated to his military service.

Even though his life is not what Jennings once pictured, he said he is grateful to be living at the Minnesota Veterans Home in Hastings and hopes to find work and eventually move to Texas to be with his fiancée.

He said Stand Down is a great idea and was excited about talking with volunteers at the Wells Fargo tent about being able to buy a home one day.

“People need to know they can get help,” he said.

Stand Down is not a new phenomenon. The phrase itself is military terminology referring to times of war when combat soldiers need to be taken to base camps for rest and recovery, including meals, personal hygiene and medical attention.

In 1988, the phrase took on new meaning in San Diego when the first Stand Down event was held.

Gloria Pederson, a 52-year-old Cottage Grove resident and Army National Guard veteran, said she’s been cutting hair at Stand Down since her husband Bob began the Minnesota chapter in 1993.

She said she does it because she likes veterans and wants to help them realize they should have hope.

“I like joking around with them,” she said, as she laughed with one of her smiling clients.

For some veterans, this was not their first visit to a Stand Down.

David Brown, a 51-year-old Army veteran who also lives at the Minnesota Veterans Home, said this was his fourth visit.

He said his life started going downhill when he became addicted to drugs. According to the U.S. Department of Veterans Affairs, half of homeless veterans have substance abuse problems.

Brown’s drug addiction lasted about 10 years, and since then he has spent a majority of his time in different treatment programs to deal with substance abuse.

On Friday, he was there with his Alcoholics Anonymous squad, which also had a tent to give out information.

While some people came for specific resources and others came for a place to eat and sleep, many found time for some recreation, too.

Nathan Hull, a 52-year-old Army veteran, played chess while he talked about how he lost everything after Hurricane Katrina hit his hometown, New Orleans, and killed most of his family.

When the storm hit, Hull was in Minnesota, but when his family went missing, he said, he fell into a deep depression that cost him his job and almost his life.

Even though Brown said he will “never get over it,” he’s learning to deal with his life and feeling better today.