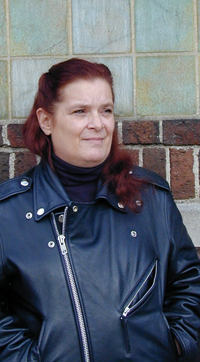 In one of Lynnda Jones’s paintings, a homeless person reclines on a city sidewalk, arm behind head, one leg crossed over the other. There’s a scatter of furniture pushed up against the grey buildings. A cat wanders by in the background. The person appears comfortable, like someone relaxing in a living room. On the walls of the buildings on either side of her imaginary street, Jones painted the words “homeless” and “hope.”

The 48-year-old artist has known both. She spent much of last year homeless after stress, mental illness and chemical dependency crescendoed into a breakdown and she walked off her job as a bar manager. At first she stayed with friends, and then with her boyfriend, but after more than three decades of self-sufficiency, always working at least one job, her unemployment and homelessness left her increasingly depressed.

“I didn’t feel good about myself,” she said. “Just emotionally bankrupt.”

Eventually, she found herself standing on an overpass intending to jump. Miraculously, a state trooper came by and plucked her off.

These days, Jones is more hopeful. After the suicide attempt, she spent time in the hospital, then in recovery. She quit drinking and began treatment for mental illness. And she found a supportive community at the Light House in Minneapolis, a drop-in center run by Spectrum Community Mental Health. Every Tuesday, the Light House hosts an afternoon artists’ group. Some 12 artists meet in a big, brightly lit room to make art, talk about their work and their lives, and draw support from each other and from Amy Rice, an artist who oversees the program.

“Art group is what got me into coming here,” Jones said. “I come here almost every day.”

Rice sees her role as coach and cheerleader. She helps the artists write bios, organize their portfolios, connect with galleries and find opportunities to show their work. Art offers an effective way for people with mental illness to connect with the larger community, Rice said.

“People kind of expect artists to be a little different,” she said. “In terms of community integration…people are a little more accepting.”

I’ve always been an artist

Jones began doing artwork at a young age. Her father drew and sketched and she learned to crochet, bead and knit from her mom. She works in a variety of media, including watercolor, acrylic and sculpture. Even while living in a shelter, she turned her single room into a studio. When she moved into her new apartment, she had more art materials than clothing.

Jones’s work is part of a group show at the Mall of America. The Homeless Awareness Art Show, curated by Outsiders and Others, runs through Dec. 31. Jones’s pieces include two beaded pictures, three sculptures and several three-dimensional mixed-media works that combine acrylic paint on canvas with sticks and other natural elements she found down by the river.

While some of her recent work draws on her experience as a homeless person, much of it does not. Since her hospitalization, however, her art has changed. “I do art differently,” she said. “My images aren’t as violent or broken, and they’re finished. I never finished anything for a long time. I would start something and then start something else.”

Jones hopes the art show and sharing her own story will change community perceptions of what it means to be homeless. “It can happen to anybody,” she said. “It isn’t a gradual thing. It’s a sudden thing for a lot of people.”

She also hopes the show gives other homeless people the hope and encouragement they need to get help. “It might help somebody else get help and maybe not feel so desperate or in despair,” she said. “You can get out of being homeless. It just takes a lot of work.”