Powderhorn resident Sara Bergen was relieved when the problem property on her block was finally leased to two “nice” families two months ago.

Before the Bonitla and Thao families moved in, Bergen had witnessed a string of bad owners and tenants of the building. Now the two families have been evicted, despite the fact that the landlord violated building code and failed to clean up their home following the flooding that happened when the tornado hit two weeks ago.

Before the current owner, Patrick Skelton, bought the foreclosed property, said Bergen, there was a series of disruptive tenants, the most recent of whom had ties to gangs. According to Bergen, there were police chases in the alley, stolen goods moving through the home, and last year a teenager killed himself playing Russian Roulette in the house.  So Bergen was happy that a family with kids moved in. 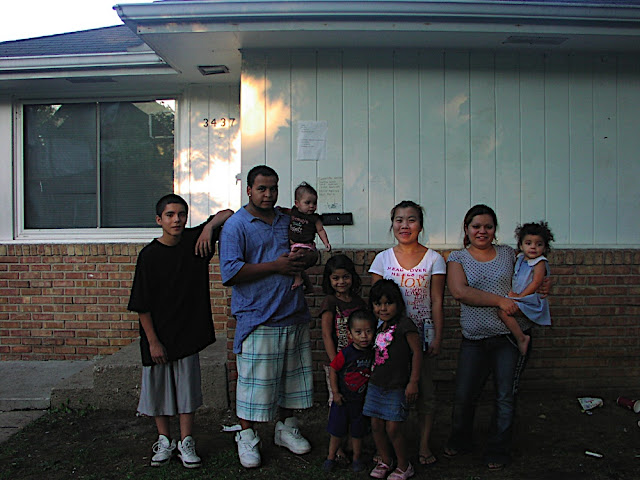 Actually, it was three families, although they were all related- Antonio Alejos, Katie Lee Thao, Juanita Bonitla and their children were all living in the house- three families in the basement, and two upstairs .  The owner had taken out the washer and dryer and installed egress windows, which are large windows required for basement apartments.

Thao said that the understanding they had with the agent they spoke to was that the landlord, Patrick Skelton, would make improvements on the property, especially the plumbing, which wasn’t working properly.  Since those improvements were not made, the families refused to pay the entire deposit, although they did pay half.

Katie Lee Thao and her sister-in-law, Juanita Bonitla, and their children and various other cousins were all living in a five-bedroom house on Elliot Avenue. Thao said that when they were first shown the house, they paid half the deposit, with the understanding that the landlord would make the necessary improvements, including problems with the plumbing, fixing the ceiling, and fixing a hole in the wall in the basement.  Those improvements never happened, and the family refused to pay the rest of their deposit.

Their second month’s rent, plus rest of the deposit, was due August 1, with a grace period until August 5.  The families were one day late in paying this fee, because Juanita’s husband Ramón, who was working at a farm in South Dakota, didn’t return until August 6.  Ramón paid $1300, which was half of what they owed.  However, since they were one day late, the landlord, Patrick Skelton, took them to court, and the families were ordered to pay the rest of the rent and deposit, plus court fees.


“They were evicted for nonpayment of rent,” landlord Patrick Skelton said in a phone interview.  He said that, although he owns the property, he was not very familiar with the case, as his brother is the property manager.  Despite his lack of familiarity, he stated that the tenants lied and violated their lease.

While there was no stipulation on their lease that the owner would make improvements on the house, Thao said that they had a “verbal agreement” with a woman who worked for Skelton, and who showed them the house.

They paid all of the money except the court fees, and signed a promissory note saying they would pay the rest.  However, the plumbing problems were ongoing, and they didn’t think they should have to pay any more money until those issues were resolved, Thao said

Then the tornado hit.  The entire basement was flooded, destroying beds and clothing.  Thao said they called the landlord, who said he was too busy to help them, and that he would send a worker the following day to clean up.  Needing a place to sleep that night, the families cleaned the place themselves.  Thao said she and her son had to sleep on cushions on the floor, once they had gotten rid of all the water, because her bed was completely destroyed.

Their neighbor, Sara Bergen, who had been checking in with the family about the events, said that after the basement flooded, the family again had less incentive to pay the court fees. “I was appalled that the basement was flooded and the owner wouldn’t do anything,” Bergen said.  She contacted city inspections, to have them check out the property.

Greg Simbeck, Project Coordinator for the Department of Regulatory Services, said that the property was written up for illegal ceiling heights and a bunch of orders, including over-occupancy, clogged gutters, and no running water.  “Ultimately, the landlord is responsible,” Simbeck said.

And yet, on Tuesday, August 25, the three families living in the house were given 24 hours by the Hennepin County Sheriff’s department to vacate their home.  The eviction was due to nonpayment of rent, rather than because the building was condemned, but Simbeck confimed that the house was unlivable, so they may not have been able to live there in any case.  Everyone left that evening, and dispersed.  Katie and her son moved to Wisconsin to live with relatives, and everyone else moved in with other family members in Minneapolis.