My introduction to Holy Maury Mother of God came through VJ “Papa” Matt Visionquest, who tweeted a link to the Tumblr blog with the note, “Best Tumblr I’ve seen in a while.” When I saw the riotous animated GIFs ripped from Maury Povich’s talk show, I laughed a lot, and then I started to think, and then I wrote a review calling the blog “the best outsider art on the Web.”

The blog’s anonymous creator didn’t respond to a request for comment until after the piece was published, at which time he posted an approving link to my review, telling me in a follow-up e-mail that I “really get” what he’s trying to do. Though he’s asked that his last name not be published, the blog’s author did agree to come partially out from behind his curtain of anonymity and answer a few of my questions via e-mail. His name is Scott, and he’s a 39-year-old Chicago resident who calls himself a “wage slave” working “in the field of manufacturing for a major brand of house paint.”

Why are you doing what you’re doing with Holy Maury?
First and foremost, I’m a huge fan of the show and have been off and on for years. But more than that, I’m a huge fan of all manner of exploitation, humbuggery, and ballyhoo, and this show, probably more so than most, fits so snugly into that genre. Some of the stuff we see on Maury is obviously fake. In the spirit of old sideshows and traveling carnivals, we know we’re being fooled, but the experience is so satisfyingly bizarre we don’t care and we always come back for more. That being said, I do believe that a lot of the people on Maury are genuine, if not a bit exaggerated, and for whatever reason are willingly appearing on national television to entertain us and (possibly) feel better about themselves and/or their situation…possibly. The purpose of this blog is to take all the ingredients of a healthy Maury stew and filter them through my own sensibilities, hopefully creating a fresh and somewhat twisted flavor that everyone is familiar with but may not have tasted the way I prepare and serve it. Also, the Maury audience is the best ever, and if you pay attention, you can see that the producers are very aware of the strange and exotic birds filling those seats. The editing and camerawork proves it. Even certain audience shots and sequences get recycled in the same season! I just feel an overwhelming need to preserve these moments as well as celebrate them.

Have you created other work—other blogs, images, etc.?
Yes. I have three active Tumblr blogs and HMMOG is the latest. I also have two blogs via Blogger (technically two, but one is fed by the other), and that is where my blogging started. I created scandyfactory.blogspot.com to showcase my ever-growing collection of VHS tapes through box art scans and film clips. I also have a fascination with Playboy Playmates and Penthouse Pets who appeared in genre films throught the ’70s, ’80s, and ’90s, so I celebrate that as well, along with other indulgences of flesh-on-film. Currently I have over 5,800 movie titles in my collection. My main Tumblr blog is scandyfactory.tumblr.com. 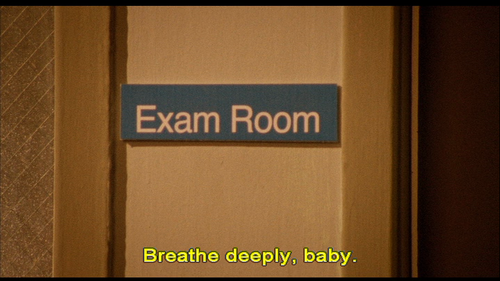 You’ve obviously had a lot of positive and negative reactions to Holy Maury. Have there been any that really stuck with you, or caused you to rethink what you’re doing?
More positive than negative, I’m happy to say. But recently, I riled someone up so much that they accused my blog of “constantly making fun of others.” They went on to say they were following me anyway, despite their convictions. Anyway, my response to her went unanswered, and it was the only time I have yet to respond to someone for negative feedback. Is my blog making fun of others? Not even close, and I’ll tell you why. The images I post and the words that I quote come from the very reason that the Maury show even exists: the guests. They are the driving force, and all we do as spectators is follow. If someone wants to appear on my television and go on about how they slept with so many men they have no idea who fathered their child, or that they had oral sex for a cheeseburger, or that pickles make them cry hysterically, or that they smell their man’s genitals while he sleeps to check if he’s cheating, and be as indignant as they wanna be in their own words, then any finger-pointing knee-slapping reaction they get is not only well-deserved, but also entirely appropriate! I have no intention of rethinking a thing other than how to keep myself and this blog’s followers entertained.

Have you heard from Maury Povich himself, or from the subjects of any of your images?
I have not, but if Maury ever mentioned my blog on the air I might have a heart attack! If he or his staff ever sees my blog I hope they see that it is presented with true love and in the spirit of fun. I heard from several followers who said they went to school with a guest who was being crushed on by a one-legged stripper (one of my more popular animations), and I have heard from one person who claims they were in one of my GIFs of the audience, but that’s it. So far.