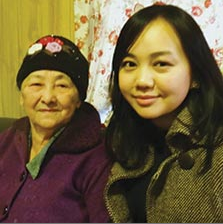 For much of my own cultural heritage and recent history, heroes were men in military uniforms who fought to save people and bring forth peace. War defined heroism and created leaders, and this also divided able-bodied men from women, children, the disabled and the elderly.

To think of who was a protector, it is easy to think of the Hmong veterans and leaders who were mostly, if not all, men. These are the people who directly took part in shaping recent Hmong history and deciding what is meaningful in our historical narrative.

I grew up learning about the Vietnam War, learning about General Vang Pao and the sacrifices that were made, and seeing the decorated veterans during every Hmong New Year celebration. The military uniforms, medals, ranks and prestige made our past struggles glamorous; it felt like war was honorable, and in some ways it was. But this dominant narrative of heroism also excluded many stories, truths and experiences that challenged and broke out of the mold of war heroes.

To be a protector or a guardian seems to demand an almost herculean effort to fulfill what heroism usually entails: saving or protecting people, facing adversity and coming out on top. The words “protector,” “guardian” and “hero” are reserved for a certain kind of person who usually is described as being larger than life.

The experiences of Hmong women during the Vietnam War have never been part of the dominant narrative that forms our identity today, let alone a part of heroism and sacrifices. From death, violence, rape and powerlessness in war, much of the time the stories and experiences of women are seen as just “collateral damage.”

When I think of women as protectors, I think of my grandmother. She became a single mother after the death of her husband during the war and took care of her 14 children. She saw her country torn apart by war, ran across battle fields and watched her children suffer, yet she continued to live on and make sense of her life. After the end of the war, she was in a different country living in an overcrowded refugee camp with five children left. She lost almost everything. She tried hard to keep her mind and family intact when everything and everyone was broken.

This hardly seems heroic, but nothing about death, violence and war is truly heroic. There are no winners or losers in war, good guys or bad guys, because nothing is black and white. But stories of heroism are black and white. They include a hero, a villain, a beginning, a climax and an ending. There is nothing “human” about a hero.

After my grandmother “saved” her children, the story didn’t end there. With her life thrown into chaos, she slowly put the pieces back together, created a new life from what couldn’t be “fixed” and has given so much meaning to her family’s identity. Every year, during the Hmong New Year, we commemorate our forefathers and veterans for their sacrifices and struggles. My grandmother’s story was never told. She never got a medal and she’s not a war hero, but she saved five people: her children.

This year, I would like to express my gratitude to all of the Hmong women, especially my grandmother, for their resilience and strength. I now see heroism in a different light.

Tiffany Vang lives in St. Paul and writes for the Twin Cities Daily Planet about issues of inequality.