University of Minnesota freshman Kaoxue Vang, left, helps Pao Lee, center, and Pao Xiong, right, with an assignment on dinosaurs. Vang tutors every Sunday night through the Sunday Tutoring Program hosted by the Minnesota Center for Neighborhood Organizing. Vang was tutored in the program when she was in grade school. (Photos by Marisa Wojcik)

When Kaoxue Vang arrived in Minnesota seven years ago, the only English words she knew were “I love you” — a common phrase in the Thai refugee camp where she was born and raised.

On the ride home from the airport, she was first introduced to streets with names and green grass where she was used to seeing dirt.

Soon after, she was also introduced to the challenge of navigating the education system without a full command of the English language or support at home.

But with the help of University of Minnesota-based programming and community support, Vang pored over her studies and overcame the odds.

Within seven years, she went from only knowing three words of English to applying and earning admission to the University where she is currently a freshman.

Heidi Barajas, associate dean at the University’s College of Education and Human Development and executive director of the Urban Research and Outreach-Engagement Center, has extensively researched issues of equity and access to education.

She has also observed Vang as part of a research project about Hmong student success.

Barajas said Vang quickly realized the key to educational success for any student.

“One thing I’ll say about anybody successful in education is that they’re able to seek out support,” she said. “In [Vang’s] case, she had a lot of support and knew where to go for help.”

On Sunday evening, Vang stood over her 14-year-old sister Maixoua Vang’s shoulder at the Humphrey School of Public Affairs and helped guide her through her ninth grade advanced composition homework.

“This is really weird,” Maixoua Vang said, about her sister’s new role as a tutor. “We used to come for help together and now she’s the one helping.”

Kaoxue Vang said she probably never would have stepped foot on the University campus without help from Jay Clark and the University’s Center for Urban and Regional Affairs.

She said she remembers sitting in classrooms where she didn’t learn anything because of her limited English and relying heavily upon Hmong classmates and relatives whenever she needed something.

“It was frustrating and boring,” she said. “We couldn’t do anything. We only left for school and came back.”

Clark said he encouraged them to seek enrollment elsewhere through the “Choice is Yours” program, which allows low-income students to enroll in suburban school districts where they would have access to more challenging academic environments that would encourage them to learn English faster.

Vang and her six younger siblings enrolled in Hopkins School District. They also became regulars at the Sunday Tutoring Program held at the Humphrey School when it began in 2008.

“That’s when my English really started to improve,” Vang said. “It helped so much.”

Each weekend, Clark and Yia Yiang, a CURA Hmong neighborhood community organizer, transport 15 to 30 Hmong students from their North Minneapolis homes to Humphrey for homework help, student support and activities.

This semester, Vang became the first to make the transition from student to tutor.

“I’m really proud of her,” Maixoua Vang said, about her older sister. “I saw how much she went through to make it to University and maybe now she can help when it’s time for me to apply.”

Yiang said Kaoxue Vang’s success has had a positive impact on students in the program and helps achieve the secondary goal of the program — to make students believe they belong on university campuses.

“Kaoxue used to be in the very same van with them, now she’s walking around at the University. I think that really sends a powerful message,” he said. “It gets them thinking, ‘If Kaoxue can do this, I can do this.’” 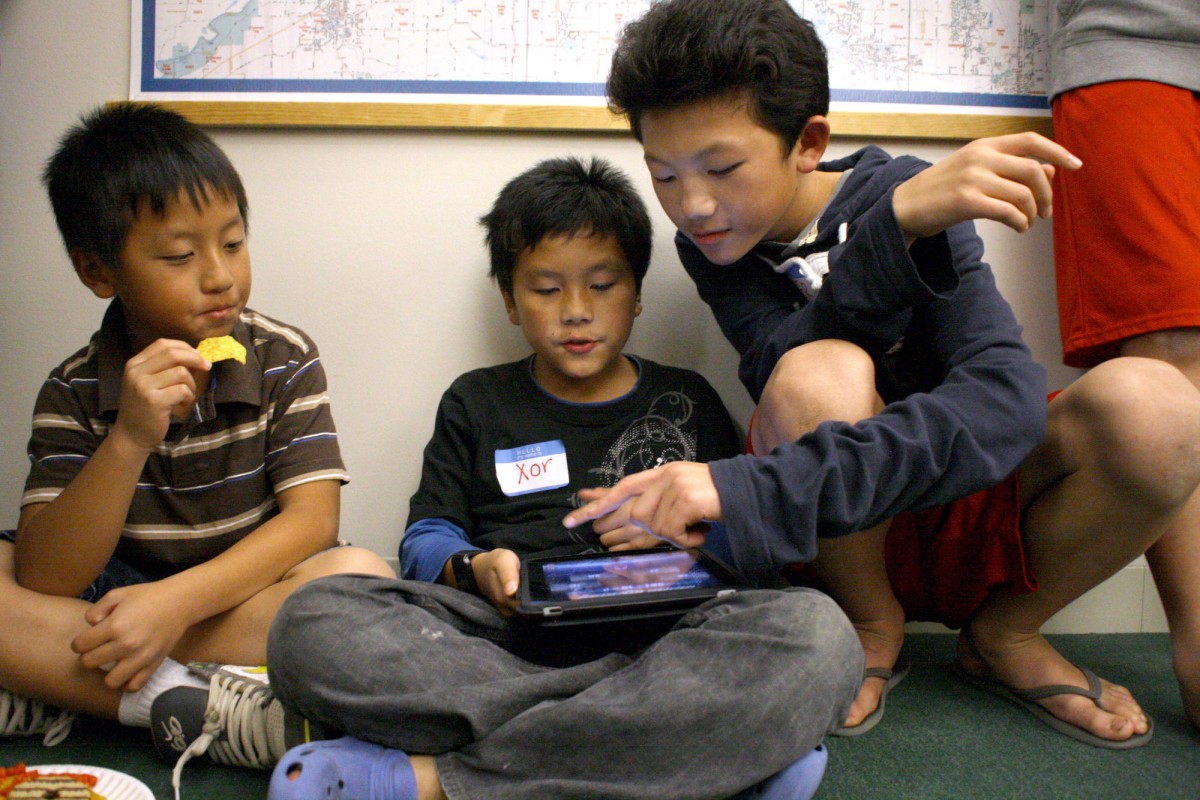 Grade school students, from left to right, Meng Lee, Xor Vue and Ser Yang play math games on an iPad during a snack break Sunday at the Center for Urban and Regional Affairs at the Hubert Humphrey Center in Minneapolis. Many local grade school students come to the Sunday Tutoring Program to get help with homework from University of Minnesota students.

Vang spends most of her time studying in her dorm room at Comstock Hall, where she is a member of the Hmong living-learning community. She said she works twice as hard as most of her classmates to keep pace as she continues to improve her language skills.

“If something takes them 30 minutes, it will probably take me an hour,” she said. “But I always challenge myself to learn more and do my best.”

Though she said college is hard work, she admits it’s a welcome break from home life. 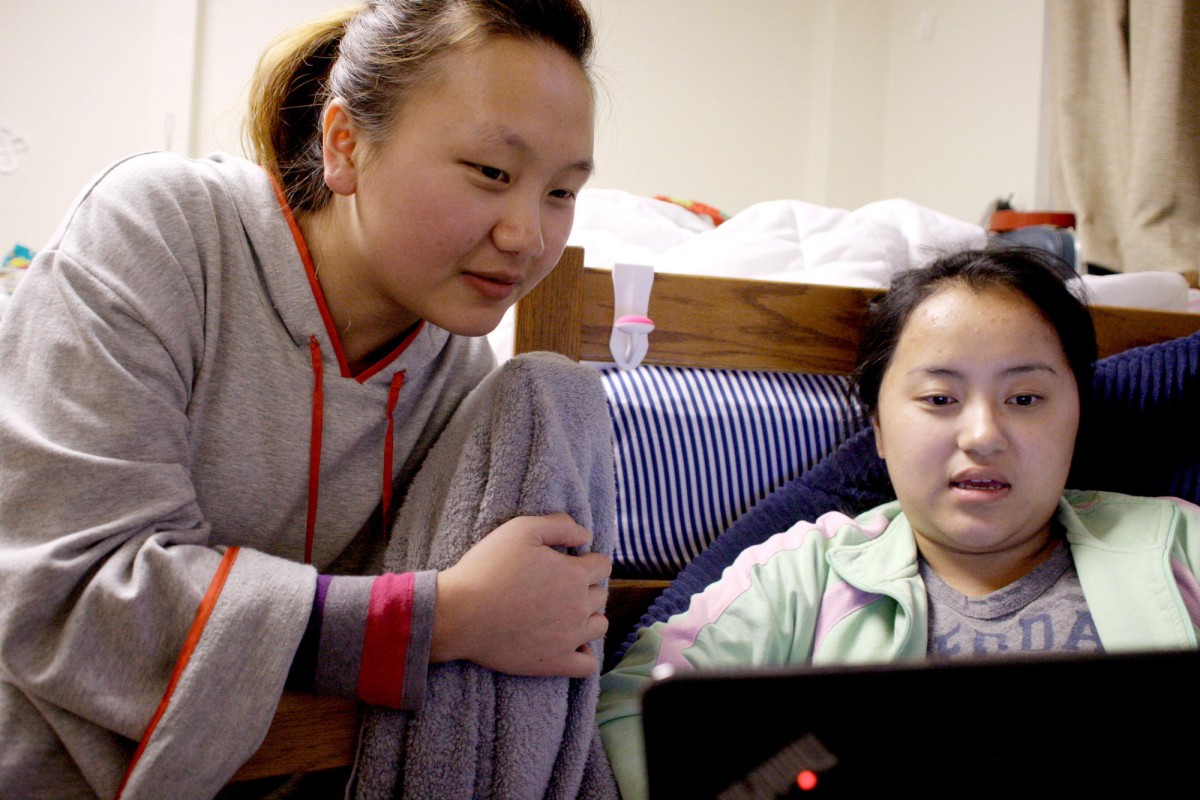 Kaoxue Vang, left, a freshman student at the University of Minnesota, studies with her neighbor Song Thao Tuesday at Comstock Hall in Minneapolis. Vang and Thao live in the Tsev Hmoob (Hmong House) Living Learning Community. Vang is a leader and active member of the Hmong Minnesota Student Association.

Like most eldest daughters in Hmong families, Vang said she carried a lot of the burden of housework and caring for her younger siblings, but Yiang said that responsibility may have provided the discipline she is known for in the classroom.

“She doesn’t have the mindset that she’s only been here for six years,” he said. “It’s not easy being the oldest Hmong girl, and for her that experience transferred into her studies.”

Neither of Vang’s parents have a formal education. Vang said their primary source of income growing up was what little her mom made sewing Hmong clothing that was shipped to America and sold. Her father is a factory worker.

Though she said it is difficult for them to understand her University experience, she knows she’s “made them proud.”

Barajas said Vang earned admission to the University through the Trio Program, which provide federal support for students from disadvantaged backgrounds.

Though she attended workshops and asked for help, she completed most of the application process on her own.

Her college application essay was about all of the challenges she’s overcome since coming from Thailand.

Vang dreams of a future in medicine — possibly pharmacy.

In the meantime, her biggest challenges are finding a student job and tackling psychology, which she said is her most difficult course.

“Sometimes I feel jealous of students who don’t have to work hard to make good grades,” she said. “But I don’t like to think of that stuff. I just keep doing what I can and trying to be a good student.”