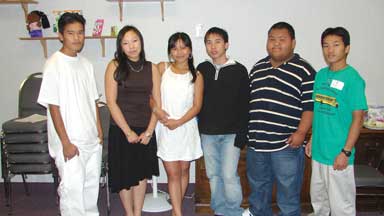 Ready 4 K, a nonprofit educational organization that is designed to raise public awareness and advocate for policy change, arranged for its Hmong Leadership and Mentorship Program to take part on a “Bus Tour for School Change,” Around 40 students, parents and supporters traveled around the metro area on Aug 29 to meet with superintendents to share their perspectives on education challenges facing Hmong youth in the Twin Cities.

Vicki Thrasher Cronin, Ready 4 K Community Relations, said the tour was designed to give immigrant high school students a chance to build their leadership capacity around school issues and to give them a voice through direct dialogue with school leaders.

Jennifer Blevins, director, Community and Systems Change, Family & Children’s Service in Minneapolis, said the meetings surpassed expectations, and said the students were impressed with receptiveness of the superintendents and principals in listening to youth share their concerns and insights with school administrators for change.

“This organization is specifically trying to develop today’s youth into tomorrows leaders,” said Blevins, who described the team as a group of like-minded youth who have identified their concerns and created goals to help the children coming into school to have an even better opportunity for success.

Michael Vang said the group is worried about the children entering kindergarten have high quality early care to perform better in school and go on to graduate from high school and even college.

Kabee Chang followed to talk about school climate issues, and specifically the problems of violence, drugs and school safety. She said that students do not want to go the rest room. The hallways and stairwells are havens for students brandishing weapons, hitting people as they pass by, and passing drugs.

“We would like the school to have a school climate committee to create a plan for making changes,” said Chang. “The committee should include students, parents, teachers and administrators.”

Chang also said the school technology is becoming very outdated. She said there are some classes where there were no books and they were expected to get the information online. They could not get access in the library and they had no computers at home.

Chang also said that ESL students have a tough time in large classes. She would also like to see the Hmong language qualify as a second language for credit.

Tua Xiong discussed college readiness. He said there is not much support and many students are not even aware if they have a guidance counselor to help with planning and scholarship applications.

Drake Ly provided the background and presentations were made by Hue Vang, Michael Vang, Mysee Chang, and Kia Lor.

The issues were the same, with the additional concerns about gang related graffiti that is all over the bathroom walls and lockers.

They also addressed class ditching, which they think is partly due to student frustration with teachers that are not interesting or put an effort into teaching.

“My brother was in music and for some reason the teacher didn’t like him, and so she failed him even though he was good,” said Michael Vang. “Sometimes teachers accuse me of doing things wrong even though they see other students actually doing it. Teachers assume, make judgments and put you down. Some teachers seem like slackers. The impact on me is I can’t learn. If the teacher is engaged and supportive instead of negative, I learn more when I get the support I need.”

Kia Lor said there needs to be more effort at getting kids to be aware of higher education opportunities so that they can make choices to prepare. She is upset when schools lose class time to see counselors that don’t seem to help them at all.

She described the behavior of a disengaged teacher as a disciplinarian that fails to encourage students. They stay at their desk and leave students confused over assignments. They verbalize frustration and shout often.
In turn the students begin daydreaming, sleeping or goofing off. They do not pay attention or complete their assignments. They ditch class and get into trouble.

“Students who are engaged (doing homework, participating in class) tend to have higher levels of higher academic achievements,” she added.

Xiong was concerned that with more Hmong students than other ethnic groups, that there should be more Hmong staff and faculty. He also thought that a Hmong Culture Class would help Hmong students feel connected and help to address divisiveness and prejudice with the rest of the school population.

“Right now, racism is a problem in our school,” said Xiong.