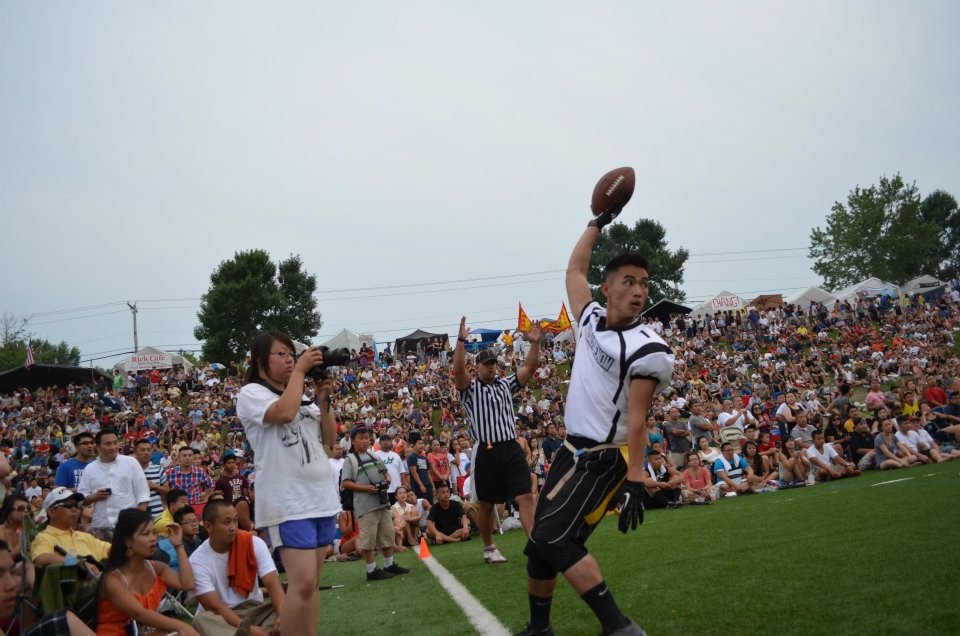 Streaking along the sideline, #12 flashes by the linebackers as he races towards the first down marker. He catches the ball, evades the first tackler and then gets smashed to the ground, a pile of defenders quickly stack on top of him.

He might be the smallest man on the field, but somehow #12 is tough enough to keep bouncing back up after being crushed again and again by these giant men.

No, this is not Percy Harvins, #12 of the Minnesota Vikings. The player described here is Richard Xiong, wide-receiver and team captain of the Harding Knights varsity football team.

Xiong is one of many Hmong players on the Knights who are key contributors to the team’s early season success. Most notably, there is Chealang Yang (#3) who is among the conference leaders in nearly all receiving stats and plays on nearly every single down, including on offense, defense and special teams. And then there’s running back Joe Vue (#85) who at only 140-pounds smashes through the line like he’s a 300-pound full-back.

A look at the rosters for other St. Paul high school teams will show at least one or two Hmong players on the squad, and as in the case of schools like Harding and Johnson, nearly a quarter of the names are Hmong.

And the phenomena doesn’t end in Minnesota. All across the country in areas where Hmong people reside, familiar names like Vang, Thao, Moua, etc., are gaining a reputation as good high school football players.

No, there aren’t any Hmong football players in the NFL yet, but it is remarkable how the game of football, which is arguably the most “American” and one of the most brutal sports, has become a magnet to the Hmong, who are some of America’s newest—and most diminutive—people.

The story is so intriguing that even the national press has taken notice. The December 12, 2011 edition of Sports Illustrated featured a small Arkansas high school football team that had won the 2010 high school class 2A state championships. 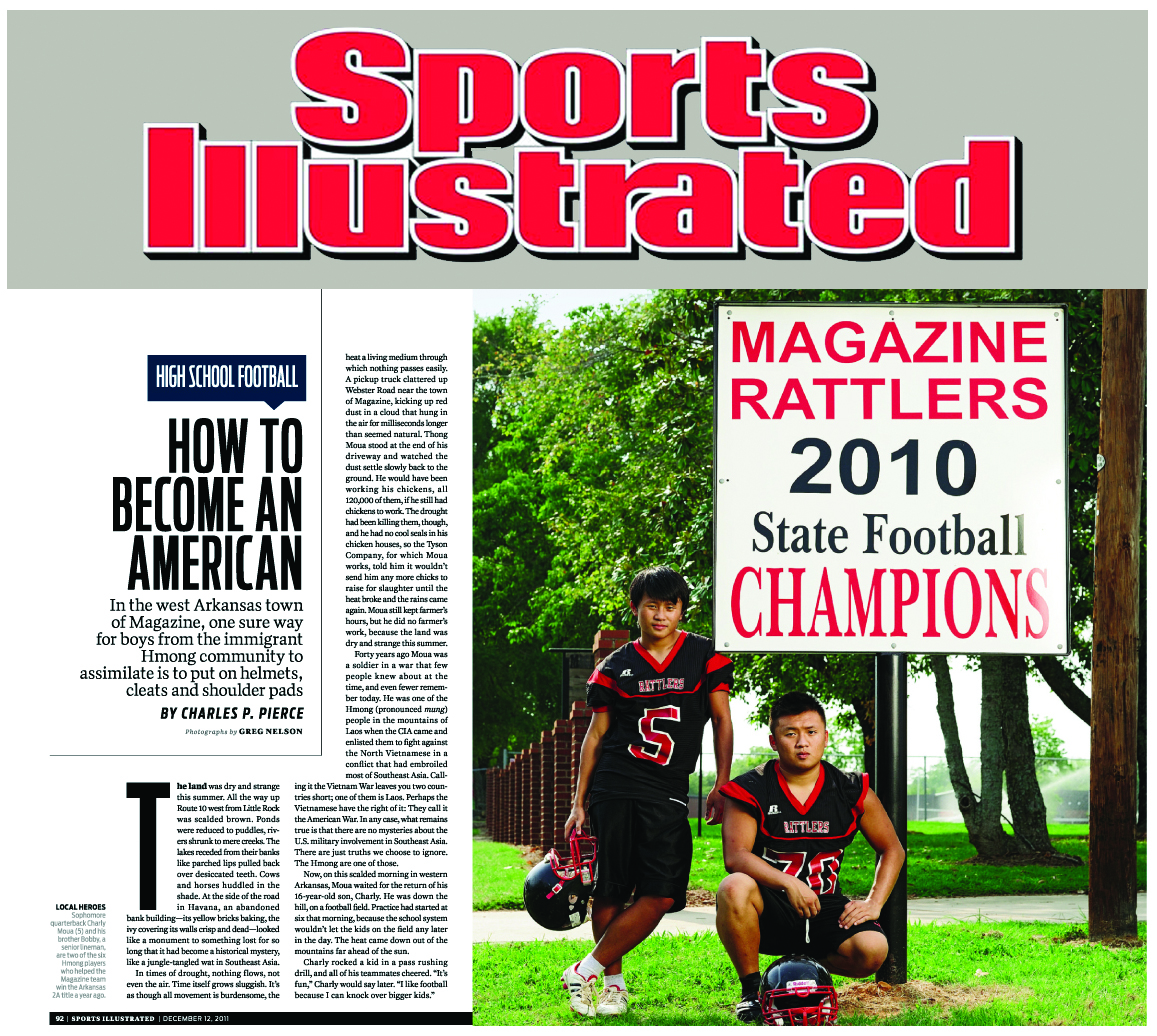 Entitled, “How To Be An American”, the article follows a core of Hmong players who were integral to that championship season. The article delves on how football has helped to bridge the cultural gap that had existed in the town of Magazine, Arkansas–one of many small towns in the Ozark where the Hmong have migrated over the past decade as families flocked to the chicken farms in that area of the country.

The article also points to the amazing ability of these smaller players who were  physically able to be so effective on the football field:

The Hmong players not only created an intriguing image for the Magazine program but also forced the coaches to radically rethink the physical configuration of a football player. Suddenly coach Josh Jones and his assistant, Doug Powell, had to accept the fact that someone 4’9″ and 120 pounds, light enough to be carried like a sack of potatoes by one of his classmates, could be a powerful and efficient linebacker or could pick up two or three tough yards—or both.

While the participation of Hmong players in mainstream football is significant, the explosion of flag-football played by the scores of Hmong youth, boys and girls, can be described as the ultimate example of generational adaptation.

Flag-football had been an obscure sport played by neighborhood kids when Hmong kids from the projects picked it up in the early 1990s.

“We always had a lot of guys hanging around, so it was either football or soccer,” explained one of the founders Plaza Boyz, a well established team among the Hmong Flag Football world. “Most of us younger guys wanted something new, so we played football all day and night out in our little park at Liberty Plaza.”

Based on traditional American football, flag-football requires that the defender rips a flag off the ball carrier to stop the play. This brand of football is perfectly suited for Hmong players because quickness and mobility are the prized attributes for success as opposed to size and brute strength as in the case of American football.

At Hmong sports tournaments, there are now more teams registering for flag-football than soccer, often prompting organizers to limit the number of football teams because of the lack of space. Additionally, flag-football is to blame for the declining participation in “traditional” sports such as volleyball and basketball.

Flag-football has grown so popular, says a law enforcement officer familiar with Hmong gangs, that some of the decline in gang activity in the Hmong population is directly attributed to the rise in flag-football.

“What we are seeing is youth spending so much time on the football fields and less time on committing crimes,” said St. Paul Police officer Y.V.

In Minnesota high schools, flag-football has become sanctioned as an official sport in some districts and Hmong charter schools are becoming involved in a big way. In 2011, the Hmong College Prep Academy Warriors went undefeated and won the Eastern Minnesota Athletic Conference. Other charter schools such as Prairie Seeds Academy are in the process of getting involved in the sport as well.

With no doubts as to football’s popularity in the Hmong community, the question that needs to be asked is, “Why has football become so popular in our community?”

Dennis Lee Xiong, a coach on the Park Central High School football team, shared his thoughts. With years of involvement in playing, studying and now teaching the sport, he too has seen the Hmong community gravitate to this sport.

Xiong attributes a number of different reasons for the growth of football in the Hmong community, including a gradual acceptance by coaches and parents which has helped to break the barrier of fear that had existed in the past. 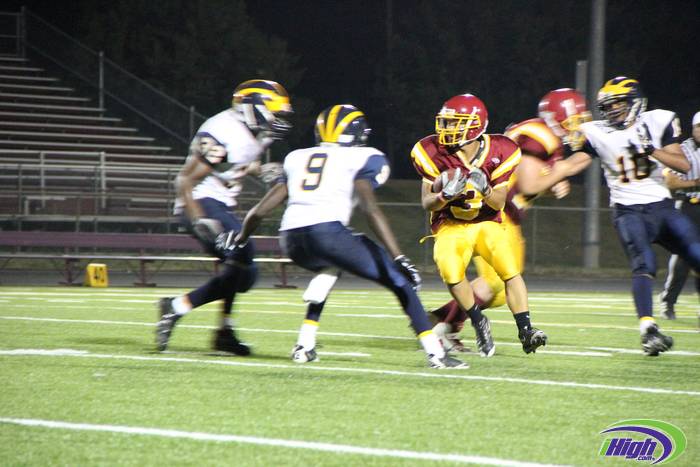 Most importantly, Xiong notes that it’s been the kids themselves who have broken through these barriers.

“I think it’s become such a popular sport with the younger generation of Hmong kids because they’re starting to realize the opportunities that they have. So many Hmong kids use to always prefer to play flag football rather than organized football because they felt that they weren’t big nor strong enough to play. I think that’s the overall impression that most Hmong kids used to have, but that perspective is changing because we’re starting to see so many Hmong kids coming out for high school football.”

And now for the first time ever, Hmong kids are starting to play the game at a very young age where they are learning the basics and fundamentals.

Jerry Thao, coach of the 4th grade Upper East Side Bulldogs, thinks that it is essential for kids to start young so that they can learn how to play the game properly to avoid injuries and to play more effectively.

“It’s the ultimate team sport where each player is just as important as anybody else on the team,” Thao speculated. “And Hmong people, we’re all about community and togetherness.”

To parents like Sang Moua whose 9-year-old son Isaac is playing his first year of tackle football, participating in the sport is important to help develop his son’s physical and social growth.

“When I was a kid, I would come to the park and wish that I could play football, but my parents always thought it was a waste of time and that I was too small, and I’ll admit, I was really intimidated as well,” Moua reflected as he stood at the sidelines. “But after going through high school, I realized that participating in sports and clubs would go a long way to develop positive habits and social connections. That’s why it was important for my kids to get this experience. Plus, I really enjoy watching football!”

To kids like Isaac, the game is an opportunity to compete with his peers and fills his time with some positive activities.

As being the first generation of Hmong kids who will play football from the earliest years, Isaac is a representative of a new wave of Hmong who are making their mark in America.

One of the visible differences between the sport of soccer, which Hmong kids still play in large numbers, and football, says Moua, is that you have more Hmong dads coming to football practices.

“In truth, I come to be near the field, just in case Isaac gets hurt,” admitted Moua. “However, I come to watch because I enjoy the game so much. I have a true passion for the game along with my son.”

Coach Xiong adds that, “A young boy would benefit from playing football because they’ll have fun playing alongside their teammates, coaches, and in front of their family and friends. Not only that, players take something good out from being a part of a football program and it changes them to becoming better young men for their futures. That’s the greatest benefit that any player will have from playing football because when they look back, they’ll appreciate what the game has meant in making a difference in their lives as well as giving them the opportunity to play a sport that’s beloved by millions of people worldwide.”

Will we see names like Moua and Vang one day on NFL teams? It’s highly unlikely, but the wave of popularity for football in the Hmong community has already seen impact in high schools and those are mostly with kids who just recently got involved.

There have only been a very small handful of Asian players in the NFL, and a good number of those players such as Hines Ward (half Korean) and Patrick Chung (half Chinese) came from ethnically mixed households.

Perhaps the best role model for Hmong players can be seen in a player like Dat Nguyen, a Vietnamese-American who made a mark as an undersized linebacker on the Dallas Cowboys in the 1990s.

Even if there are no Hmong NFL players in the foreseeable future, the story of the Hmong and football is a classic story of Americana and how it doesn’t matter what you look like or how big you are to succeed, it’s how hard you are willing to work and sacrifice to make your dreams come true.

And as in towns like Magazine, Arkansas or in schools like Harding High in St. Paul where the Hmong student population is nearly 1,000 kids, football has become much bigger than a game. It’s been about common respect and an understanding that hard work and communication can solve a lot of problems.