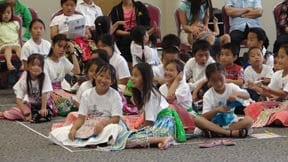 Children at the Hmong Culture Camp at Concordia College in St. Paul

“We all sing in the same voice,” was the theme of the Hmong Culture and Language Program Summer Camp held again this at Concordia University in Saint Paul. The program, in its third year, invited more than 150 students in grades three through eight, and for the first time was open to non-Hmong students interested in learning about this culture.

The camp ran for the first two-weeks of August. The camp concluded with a gala event on August 11, where students performed and gave presentations on their accomplishments at camp.

“It has been an awesome two weeks,” said Baas, who was pleased with the positive results of bringing in non-Hmong children for the first time. “This is the first year for non-specific Hmong classes.”

The campers opened each day with a greetings and welcome song. It is tradition to sing it in Hmong and English. Second-year volunteer Hmong dance instructor, Pa Der Vang was inspired by the new diversity of the camp to have participants translate the song into their first languages. Then all of the campers would read it on the overhead and sing the familiar tune in Spanish, Somali, French, Hindi, and a few others.

Pader, who will begin studying elementary education at Marshall this fall, said the translations helped the campers feel a sense of belonging. She also said the non-Hmong kids sometimes learned fast and were really into the program.

“The kids sang the Hello Song in eight languages, said Melinda Seifert, an alumni volunteer. “The kids didn’t judge. They just learned the song and sang along. Then they would try another one.”

Jocelyn Thoemke, a teacher from District 22 (Oakdale) taught art under the direction of Concordia professor Cate Vermeland. She applied for a summer arts position and did not know she would be sent to the Hmong program. She was very pleasantly surprised and found it to be one of the most rewarding experiences in her career.

Thoemke helped the kids create more than 170 Pebble mosaics over the course of a week. They poured soft concrete powder into empty ice cream buckets, and made pebbles designs on top before moistening the powder with a spray bottle. They hardened into round designs that they either kept or donated as decorations for the Hmong Garden behind the Center for Hmong Studies building.

The campers were placed into one of 12 “clans,” based on their age groups. The teen campers acted as clan leaders. Thoemke directed the campers in creating their own clan paj ntaub, which is the familiar story cloth that often depicts the Hmong journey from Laos to America. The kids took thousands of photos of their “clan” members to tell their own story within the context of the camp.

“This was a wonderful experience,” said Thoemke.

Each day also began with an historical simulation of the Hmong journey. They learned the life in the villages of Laos before the war. They experience the perilous and tragic flight across the Mekong River to Thailand, their life in the refugee camps, and finally coming to the United States.

The campers would take a game like musical chairs and use it to teach how their parents and grandparents started their journey to escape the aftermath of the war, and lost family along the way to freedom from persecution.

Tzianeng Vang, chair of Concordia’s Center for Hmong Studies, SEAT and Hmong Cultural & Language Program, said the camp teaches kids the story of the Hmong journey from Laos. It also helps them understand their new American journey so that they can carry their past with their present into the future.

Vang said that if the “campers” should now realize the importance of telling their story, and to encourage their elders to tell their stories, because they will tell their loved ones, and they are not getting any younger.

“This is awsome, I love it,” said Jamie Elwell, a volunteer who taught nutrition and organized meal using the “Dole 5 A Day” nutrition pyramid. She said the program is new to her, but she became familiar with the Hmong through her classmates at Concordia.

Alex Letran, who is applying for a physical education teacher position at the new Hmong Academy site in St. Paul, helped out organizing the mainstream and Hmong traditional sports and games. The campers experienced 100 degree heat, heavy rain, and all weather in-between during their camp. He made sure the kids stayed hydrated and said the weather didn’t get in the way of their fun.

“The kids were very well behaved,” he said. “The Hmong kids are very peaceful and respect their elders.”

Jim Baas, the spouse of Sally Baas, ran the sound and did just about everything that needed to be done. He said the camp begins slowly on the first day to let the kids get to know one another. By the second day, they loosen up and begin their projects.

“The young kids are shy and it takes time,” he said.

The kids also enjoyed the additional curriculum, including hip-hop, art, dance, nutrition, the qeej, Indian and Panjabi dance, traditional and mainstream sports, games and even gardening. Moryelle Washington, a sixth grader from Minneapolis, demonstrated his skill in Japanese Lotus style of martial arts in the concluding program.

Concordia President Dr. Robert Holst attended the closing event, and said that as the Hmong are transforming Saint Paul for the better, it is right for Concordia to house the Institute on Hmong Studies. He said the summer program and the center is “welcome and important,” and has “global implications” with their example having a positive impact on the local and larger communities.