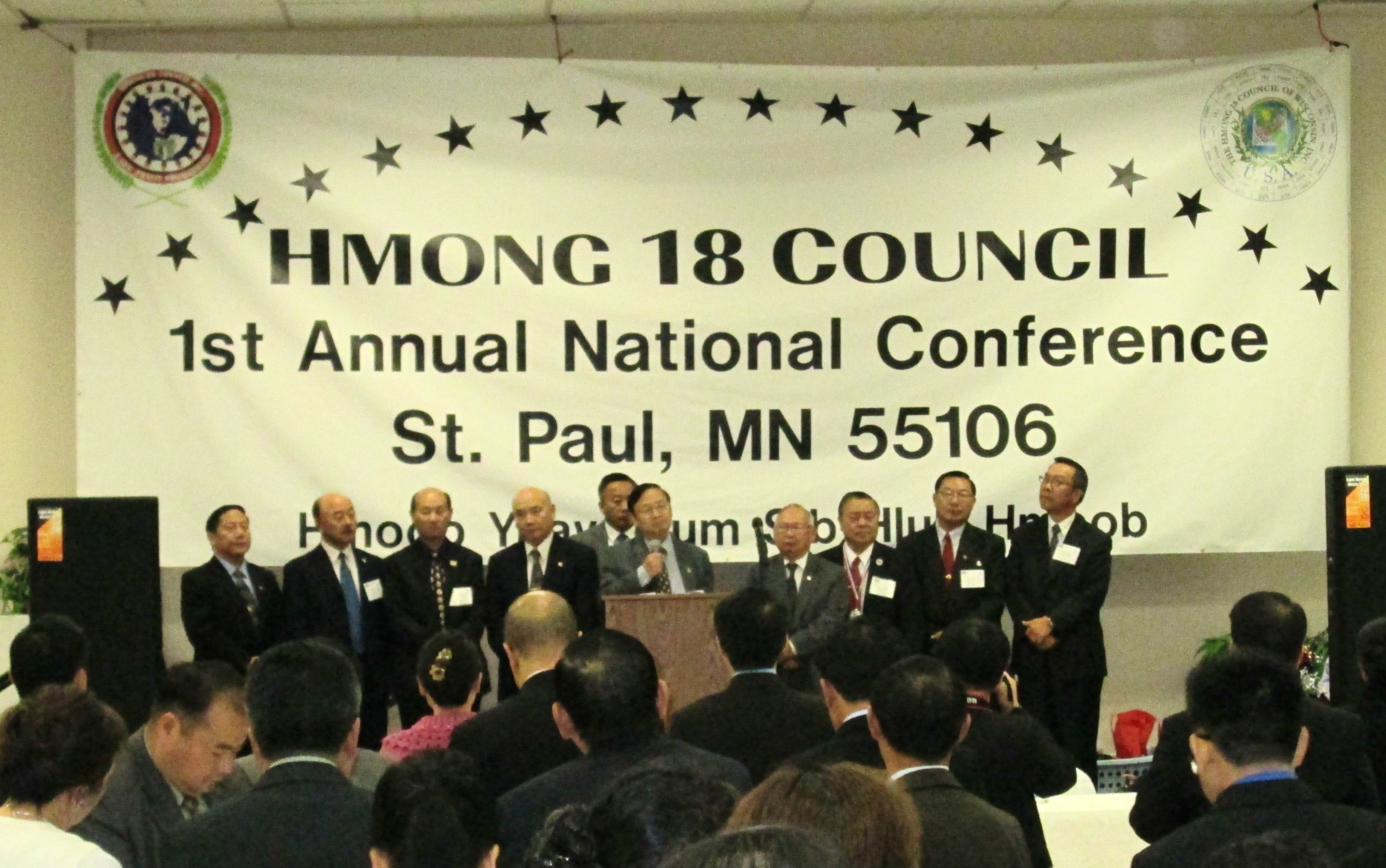 From October 18-20th, the Hmong 18 Council 1st Annual National Conference was held at the Hmong American Partnership (HAP) building. This effort was organized by the Minnesota Hmong 18 Council (H18C), which consists of Hmong leaders who represent one of the eighteen last names, and was sponsored by a variety of groups and organizations such as Hmong Village and Hmong American Partnership (HAP). The purpose of the conference was to bring “all community members throughout the nation to discuss many topics, including preventing and stopping poverty in the Hmong community by making decisions to standardize two important economic impacts in the Hmong community: Hmong funerals and bridal dowry.”  Although the idea of this conference was to include different leaders in making these important decisions, when it came to the content of the conference, it was nothing but confusing and contradicting.

Bo Thao-Urabe, who has extensive experience in community engagement which includes serving as the Executive Director for the Women’s Association of Hmong and Lao in Minnesota and Hmong National Development in Washington, delivered an informative and inspiring presentation about inclusion and the state of the Hmong population in the United States. As a young Hmong American woman myself, it was a relief to see that women were able to present views and perspectives that challenged that old structure that governed entities like the H18C at the conference.

But the next session, right after Thao Urabe had spoken, would provide testimony to the sexism and inequality that stills exists in the Hmong 18 Council and in the Hmong community.

In the Hmong Bridal Price Policy session, which was chaired by H18C’s Culture Chair of Minnesota, Cha Yeng Cha, a 20 page document of the bylaws of the bridal dowry was passed out with the council saying that they would take suggestions; 20 minutes later, the Culture Chair announced that they would be voting on it that very day. With the majority of the conference participants relatives, friends, and supporters of H18C, it was no surprise that the initial vote for the first dowry price was approved 94 to 5, with many abstaining to even raise their hand to vote. The discontent could be felt in the room by the few who disagreed. It was unfair and unethical to vote for a policy that would be made into a ‘law’ for the Hmong community when the Hmong community, frankly, was not there.

From the beginning, H18C stated that there would be no room to take questions or discuss the policy on that day; it would simply open the door for voting. But with the stirring emotions in the room, many of the conference participants felt the need to speak.

“How did you price it at $600? How did you quantify that amount for the bridal price?” said Bao Lee, one of the only youth participants of the conference.

Surprisingly, the Culture Chair said to her: “If you don’t know how we came up with that, then go and ask your mother and father.”

CLARIFICATION: The $600 figure in the quotation in the article refers to the ncaug tsiag. Ncaug tsiag is the money to pay for the cow for the bride’s funeral once the bride passes away. the bride price is set for $5,000.

Voting on the bride price policy, drafted by H18C, has been postponed to a future date, which has not been set.

Another participant, Padee Yang, walked up to the front, grabbed the microphone, and stated that the voting of this policy was wrong. Not only does this policy still discriminate women, but that the crowd today is not representative of the Hmong community as a whole. Voting would mean nothing.

“We will proceed with voting,” said the Culture Chair, ignoring Yang’s comment.

H18C completely ignored the concerns of the participants. With the group holding the microphones, standing in the front, cutting participants off when they wanted to talk, it was clear they had the power and control in the room. It is their conference where they get to put forth their agenda. The assumption that there would be real discussion and openness was a facade. Well intention people who thought H18C was ready to progress forward and be inclusive  especially of women rights were severely disappointed. The session ended with “let’s move on to the next session.” With only an hour and half allotted to this topic, what exactly could result from this session? H18C probably expected consensus, but it was anything but that.

So, what exactly about the bridal price policy was so controversial?

First, it was clear that the bridal price policy that was drafted by H18C did not have any input from Hmong women. The language used in the document was offensive and discriminatory. Some literal translations of words used to describe divorced women were: refunded woman, unwanted woman, and “sent back” woman. H18C also tried to quantify the worth of a virgin woman to a divorced woman; the dowry decreased based on if the woman was already married and if she was married before for a longer period. From the bylaws, a woman’s worth is contingent on “how used” she is.

Second, how did H18C quantify bridal prices? How exactly do you find the price? What do you measure? This in an arbitrary judgment made by a group of men who think they know best how much a woman’s marriage is worth. There is no amount, even if set to the millions, that can correctly quantify the price of a person. Would it not have been more constructive to set a price for how much Hmong weddings should be if they were really concern with the affordability of marriage? Focusing on the bridal price as a return on an investment is counterproductive. Would it not be better to abolish the bridal dowry if we were really concerned with families who are unable to pay it?

Third, H18C’s conference was meant to open discussion on issues of poverty in the Hmong community. If Cha Yeng Cha, the Culture Chair of H18C, was really concerned about poverty in the Hmong community, then shouldn’t we be focusing on issues that prevent our people from fully practicing their culture? I would argue that the bridal price and the funeral price are not drivers of poverty. Instead such things like affordable housing, transportation, workforce development, education, inter-generational poverty, and health care are much more important; these are everyday concerns of our Hmong community. The focus of the conference lacks a big picture approach.

I sat at the H18C’s conference heated and angry, but my heart is broken. It took me back 15 years to when I was a child trying to navigate what just happened to my life and why people treated me the way they did.  I felt the same thing I felt when I was 7: shame, anger, discontent, and sadness for my community.

Since I was 7 years old, my mother has been labeled a divorcee. Imagine a 7 year old hearing from her relatives and close family members that her mother is a slut, that she is worthless, and that she is fated to be a divorcee and nothing else. This idea that my mother’s worth is based on who she marries, how many times she has married, and “how used” she is disgusts me.

I have yet to marry, but understand that my mother’s status as a divorced woman will affect how my community views me. There is a lack of compassion to listen to why my mother decided to get a divorce, and it’s because of these rules and ideas that some women are worth gold pieces, while there are women out there not worth a bag of rocks that creates this mentality. Although there were only a handful of people ready to jump out of their chairs and challenge H18C, their presence could be felt. Those people, ready to act when they feel and see injustice, are the real leaders.

To conclude, I would like to give some very serious advice to H18C as a community member. You will not be able to raise funds if you continue to be sexist and exclusive. These ideals are outdated, wrong, and do not build any supporters for you. Leaders in the community will not invest in a group of men whose sole purpose is to set rules and laws that are ingrained in inequality and discrimination. The largest issue you have is bad leadership. You lack legitimacy in the Hmong community. Your bylaws and rules mean nothing especially when the Hmong culture is based on a familial structure rather than on structures like churches or organizations. Just because you approve a policy doesn’t mean the community will read it. You are on the verge of losing relevancy. Think about how you can still be relevant and positively impact the community.

But honestly, sometimes there are just things you can’t save.

Note: The main language spoken at the conference was Hmong, so much of the quotations are translated from Hmong to English.

In the conference booklet, it states “Hmong Marriage Dowry Policy,” but I am using the term bridal price since it is more accurate. Definitions are below:

Bride price, also known as bride wealth, bride token, is an amount of money or property or wealth paid by the groom or his family to the parents of a woman upon the marriage of their daughter to the groom. (Compare dowry, which is paid to the groom, or used by the bride to help establish the new household)