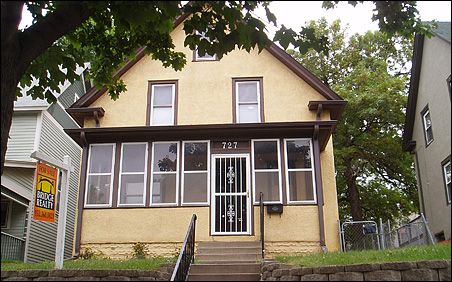 This four-bedroom, two-bath home is in move-in condition and is selling for $109,000. (Photo by Karin DuPaul)

Vacant houses — those hangovers of the monumental home-mortgage crisis — strike an unsettling presence across urban, suburban and rural neighborhoods all over the state, threatening decline.

But in Dayton’s Bluff, a diverse and historic St. Paul neighborhood where city paperwork posted on front doors marks the official vacancy of more than 240 homes among some 7,000, residents are not lamenting, but taking action.

They’re planning the Dayton’s Bluff Vacant Home Tour from 1 p.m. to 5 p.m. Oct. 9 to showcase six to eight empty homes in various stages of condition from move-in-ready to “totally a mess,” says Karin DuPaul, community organizer for the Dayton’s Bluff District 4 Community Council. Either way the houses are affordable and desirable, she says, and generally range from $60,000 to $150,000 or possibly $175,000.

It’s the fifth such tour since neighborhood residents formed a Vacant Building Committee in 2007 — early days in the economic recession.

“Our deal is we just want to get these things sold,” DuPaul says. “There’s a feeling that a lot of them are just waiting for the next person to come along and fall in love with them and make them a home. We feel it’s important to get people into these houses.”

The community perches above the downtown skyline on the East side of the Mississippi River boasting historic reminders of its early Dakota Indian inhabitants as well as small businesses, beautiful parks and an amazing variety of homes, from historically significant Victorians (built by members of the Hamm’s Beer family) to welcoming bungalows and sturdy, mid-20th century stuccos.

To add a little nostalgia, those interested in the free house tour will congregate at the District 4 Community Council headquarters at 798 E. 7th Street, to ride a 1954 Twin City Rapid Transit bus from house to house.

DuPaul and her group describe the area a “desirable and economically feasible place to call home,” a sentiment resident Erica Sandey could agree with.

Sandey, 31 and an airline pilot, took the fall 2008 vacant house tour with her mom, pretty much as a lark, never thinking she’d see a house she couldn’t live without. 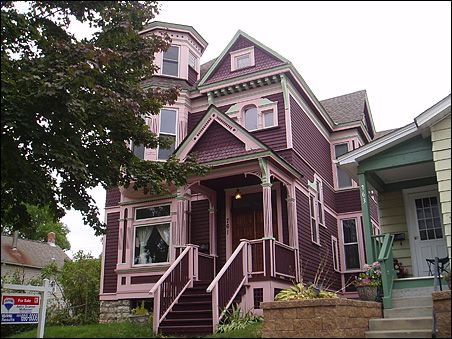 One block from the house above is a beautiful Victorian three-bedroom, three-bath not on the tour, but for sale for $249,000. (Photo by Karin DuPaul﻿)

“The minute I walked in the door, I just pictured myself living there,” she says about the 1949 stucco rambler she now calls home. She loved its character, including built-in bookshelves and dressers and even a phone shelf, she says cheerfully, as well as its affordable $66,000 price tag.

So she bought the three-bedroom, one and one-half bath home, though it needed a new roof and plumbing and electrical updates, which cost her about another $20,000.

Sandey likes her neighborhood for its racial, ethnic and generational diversity, as well as easy access to I-94 and downtown St. Paul.

(The community’s population is about 47 percent white, followed by blacks, Asians and Hispanics, according to the 2010 U.S. Census, though it is difficult to have precise numbers for the Dayton’s Bluff neighborhood because Census counting tracts include the edges of other areas.)

Sandey says there are many old, restored and beautiful houses “no different than some of the houses you find on Summit Avenue, in Crocus Hill or Highland Park, only these are affordable.”

DuPaul says that despite the poor housing market nationwide, houses in Dayton’s Bluff “are still moving, not fast, but still moving.” With some past vacant house tours, a featured house has been sold after the tour flyers are printed but before the day of the tour.

To learn more about the tour, go here or email DuPaul at Karin@daytonbluff.org.