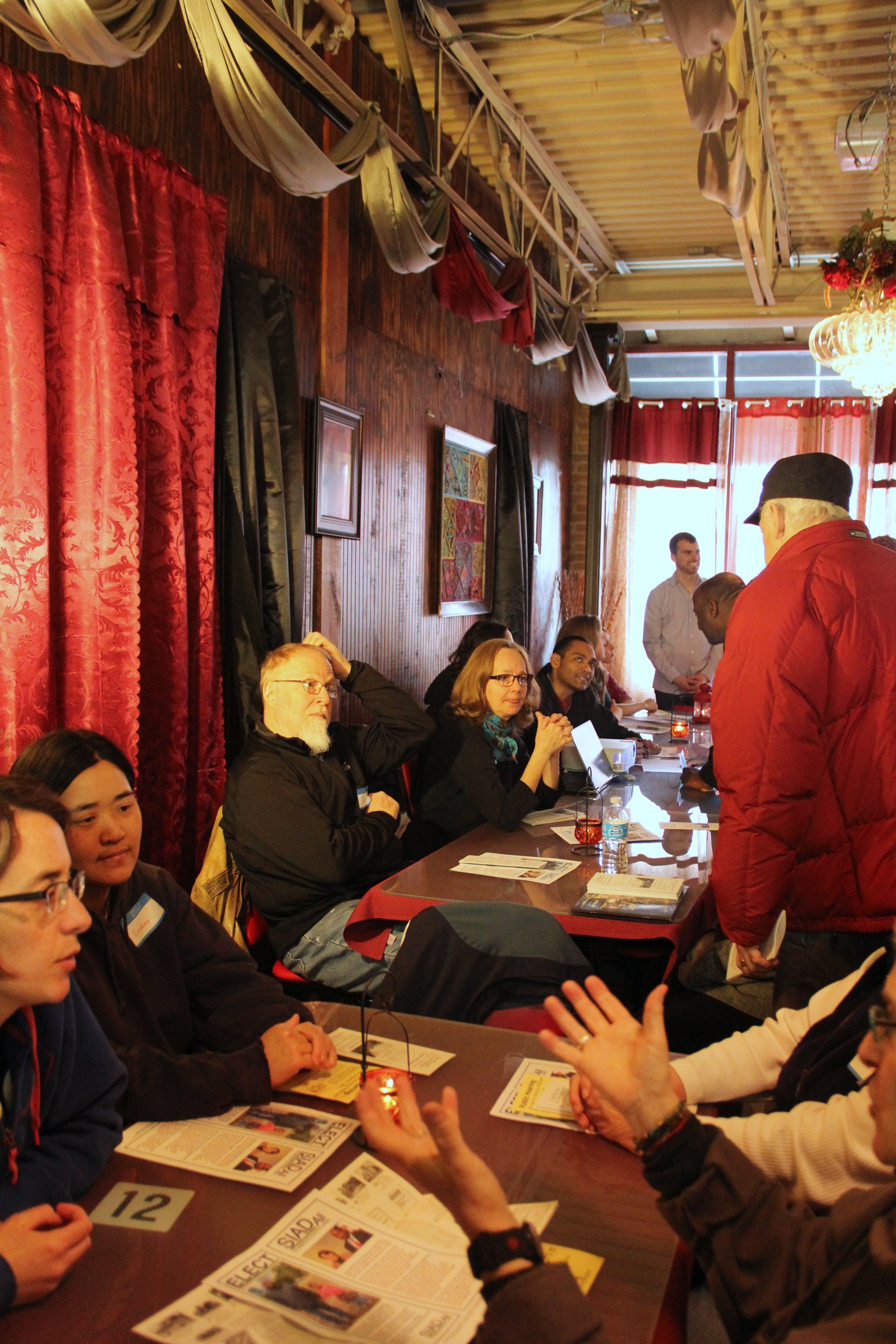 Old and new residents of the Corcoran Neighborhood enjoyed discussing their neighborhood during the March 19th Dinner and Storytelling Event at Sanaag Restaurant.

The evening started off with guest storyteller Joyce Wisdom, a historian of the Lake Street area and executive director of Lake Street Council, who gave a presentation on the new Museum in the Streets. The next guest storyteller was Osman Ali, who runs Bright Moon Cafe at Lake and Cedar, and also founded the Somali Artifact and Culture Museum on Lake Street. Ali shared artifacts from the museum and their significance.

During and after the delicious dinner which was served, there was time for everyone to share stories about the Corcoran Neighborhood. Several common threads ran though the conversations. What follows are some highlights:

Diversity: New Corcoran resident Anna Baker said she and her roommates were attracted to the Corcoran Neighborhood because, “It seemed like a really diverse group of people willing to be in a community together. That’s not something we found in a lot of neighborhoods. It feels like everybody is willing to be neighbors.”

Longtime resident Lynn recalled that when she moved to Corcoran in 1977, the neighborhood was known for its Scandinavian influence. Later, while her children attended South High, the school became more diverse.

Gerry Tyrrell also recalled the neighborhood’s increase in diversity in recent years: “When I first moved here 25 years ago, there were no Latino residents. I remember the first Latino restaurant opened in Mercado Central, then more and more Latino businesses attracted more Latin residents. My neighborhood changed over those years; from (being comprised of) mostly white residents, then Latino- Mexican and Ecuadorian-, then Somali and African-American.” He concedes that there is still work to do in order to integrate the community better, noting, “In South High School they (students of different ethnicities) get along OK, but don’t hang out together.”

Gatherings: Gatherings within the neighborhood were also brought up by several participants. Anne Holzinger recalled meeting many neighbors during National Night Outs over the years. She also has enjoyed “Flamingo Fridays” in which a neighbor displays a plastic flamingo in their front yard in order to invite the neighbors to get together. Holzinger said, “We’ve been able yo get to know each other much more, which has increased the connection you feel with one another.” Holzinger and Gerry Tyrrell also identified the Midtown Farmer’s Market as an important community gathering place. Tyrrell described the market’s impact, “It’s really helped people to become neighbors and have a sense of community. It’s a good way to grow a community.” Holzinger added, “You go to get vegetables but you cross paths, so it connects people a lot more.”

Reminiscence: Tyrrell recalled gatherings which specifically centered around reminiscence about the neighborhood’s history. For instance, when he and his partner’s house reached the age of 100, they had a birthday party for it. During the party, guests discussed what the neighborhood must have been like 100 years ago. One neighbor (Pat) even brought artifacts from the past, including trolley coins. Tyrrell also recalled events organized at the Lake Street Cemetary with the goal of educating young people about the cemetary’s history as one of the first racially integrated cemetaries. These events have included concerts, movies, and maple syrup harvesting.

Community Organizing: Community organizing was a topic of discussion as well; as storytellers recalled its impact on their personal lives as well as its impact on the community as a whole. When Silvia Perez arrived to the Corcoran Neighborhood she recalled “Coming here with the illusion that I would be free, but it turned out to be the opposite. I was enslaved by my husband for five years.” Fortunately, Maria Cisneros invited her to a group of women crafters in 2007. She received much support and assistance from the group, and was eventually invited to lead the group, now known as Mujeres en Accion y Poder (Empowered Women in Action). Holzinger said of the group, “I really think Silvia Perez is an amazing woman and has a great group of women.” Holzinger has also admired garage mural painting projects organized in the neighborhood for their promotion of, “sustainability- really important for moving from card to bicycles.”

Tyrrell described the community organizing process used to bring about the Midtown Farmer’s Market: “Before it was an unkempt space with a lot of weeds. People were excited to do something with the empty building and empty parking lot. First we got school board approval, then we got mentoring from the Minneapolis Farmer’s Market. Then the neighborhood association used the same model for fundraising and community organizing that was used for the Greenway Project. Representatives from every neighborhood reached out to different cultural groups- Latinos, Native Americans, Scandinavians…held puppet shows for kids and other special events. We still have special events and connect with churches and other non-profits.”

Osman Ali, founder of the Somali Artifact & Cultural Museum, shares the histories of several of the museum's items