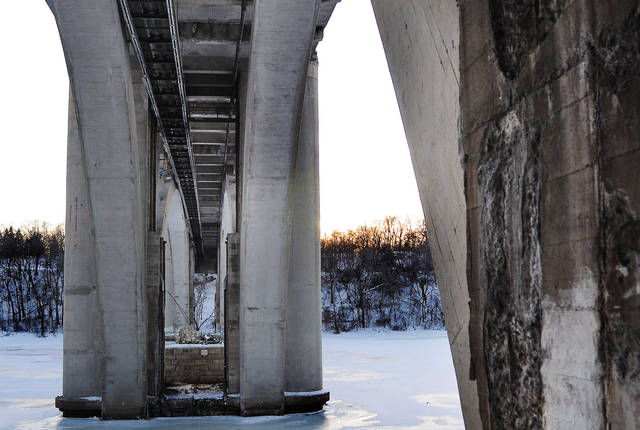 The Franklin Avenue Bridge will be rehabilitated for $28.5 million. The bridge, which was constructed from 1919-23, is considered a local and national historical landmark. (Photo by Lisa Persson)

A historic bridge near the University of Minnesota has a wide array of issues, but city staff and experts say the Franklin Avenue Bridge at the Mississippi River remains safe.

The Minneapolis Heritage Preservation Commission approved a $28.5 million rehabilitation project for the bridge on Jan. 7 after a city report said water and salts have leaked onto concrete below, damaging the bridge and exposing the steel reinforcement in some places.

“This is just cosmetic at this point, and we’re hoping to arrest it before it becomes problematic,” said Hennepin County bridge engineer and project manager James Archer.

The bridge, also known as the Cappelen Memorial Bridge, is a local and national historic landmark. Built by two prominent Norwegian engineers between 1919 and 1923, the bridge boasted the longest concrete arch in the world at the time.

The project aims to preserve the bridge, Archer said, and doing an extensive job now prevents the city from having to replace the bridge in the near future. The city report said repair methods won’t damage the bridge’s historic qualities.

“It’s seen a lot of use, and we are going to try and give it a makeover,” Archer said.

In the summer of 2015, engineers will begin repairing the bottom half of the bridge where cracks and exposed steel are
visible.

Archer said the bridge’s sole closure would come during a three- to four-month period in the summer of 2016 when engineers replace the top deck, or driving surface. Overall, the majority of the project would be completed that fall.

“Most of the damage is underneath the bridge,” he said. “Replacing the top deck will preserve the structure below.”

The new roadway will include an expanded sidewalk and bicycle lane with a barrier — separating the two from the nearby traffic.

“That will be for many people, I think, the most important thing,” said John DeWitt, a former transit committee chair for the Prospect Park East River Road Improvement Association. “It’s a frightening bridge for a lot of pedestrians right now.”

DeWitt said the history of the bridge is important to the community because it connects them to the Seward neighborhood.

Time has taken its toll on the 95-year-old bridge. The ancient concrete is vulnerable if water continues to deteriorate it, the city report said. The bridge is also particularly susceptible to damage from water freezing and thawing.

According to the American Society of Civil Engineers, 1,190 of the 13,121 bridges in Minnesota — about 9 percent — are considered “structurally deficient.”

“I don’t believe [the Franklin Bridge] to be dangerous,” Archer said. “The bridge still has the majority of its low-carrying capacity. It’s not too compromised.”

Archer compared the bridge’s damage to getting a cut on the leg but still being able to walk.

WSB and Associates Inc. structural engineer Barritt Lovelace said the bridge is safe and that these issues are normal for a bridge of its age.

“It won’t last forever,” Lovelace said. “But with enough rehabilitation, the bridge could certainly last for another 100 years — depending on how much work is done to it.”

Lovelace said with its concrete construction, the Franklin Bridge doesn’t have the same concerns as the steel Interstate 35W bridge, which collapsed in 2007.

The I-35W bridge had been rated “structurally deficient” for 16 years before the accident, but these factors didn’t contribute to the collapse, according to the accident report from the National Transportation Safety Board.

“There’s obviously a lot of maintenance work to do to keep our bridges up to standards,” Lovelace said, “but in general, they are still very safe.”