The former home of Pauline Fjelde was torn down on Christmas Eve in an emergency demolition ordered by the city of Minneapolis. The historic home, which was in the process of becoming classified as a historic landmark, had an open roof from an arson fire that occurred in September. The owner of the house, James Schoffman, who bought the building in order to demolish it and turn it into a parking lot had been ordered by the city to cover the roof by January 1. Construction crews that Schoffman hired to repair the roof dropped construction materials onto the house, which collapsed, destroying its truss system, according to Brian Finstad, a neighbor. 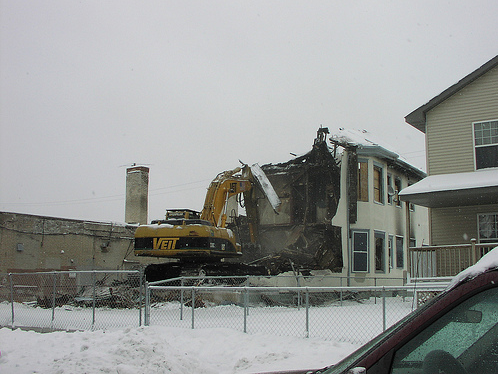 Brad Bartholomew, from Veit Construction, said he got a call from the city on Christmas Eve morning requesting the construction company demolish the house, following the accident. “They were worried it was going to tip over,” Bartholomew said. 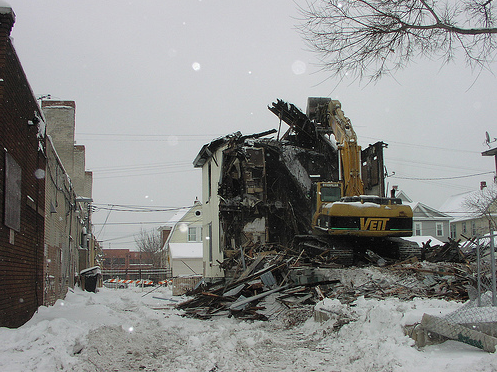 Constance Nompelis, an advocate for saving the house, said that a structural engineer employed by Schoffman made the decision to call for the emergency demolition. She said Jack Byers, the supervisor for the Heritage Preservation Commission, was on vacation for the holiday.

Nompelis said that as she and other neighbors of the home watched as the house was being torn down, they saw the trunk which once belonged to Fjelde fall from the top floor. Also in the wreckage were historic corbels from the house’s original architecture and valuable aluminum.

See here for Johnny Northside’s blog post about the demolition.

I would like to ask about the possible salvage of the porch floor…which has not been destroyed and Pauline’s trunk which fell into the basement when the backhoe pulled apart the attic.

We were all amazed to see it had survived the fire.

Since all items must be cleared from the site, there is no reason these should go to a landfill. These items have historical importance and should be saved.

Ultimately the decision on emergency demolition was made by Rocco Forte, Director of Reg Services and Emergency Preparedness, on advice from his division heads Pat Higgins and Al Olson.

CORRECTION: Our thanks to Constance Nompelis and Brian Finstad for correcting an inaccurate characterization in this article.