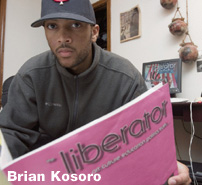 “I never thought I’d be going to funerals every other week. I feel like I’m in a combat zone.” Shelly Martin speaks softly with edgy bewilderment about her cousin Sterling Horton, murdered July 25, one of 26 people killed in North Minneapolis this year. “Sterling loved football and baseball. A real people-person. Sterling was going to be a senior at Wayzata High. He just turned 17 in May.” Martin, a petite, African-American 20-something, writes for Liberator Magazine, which is based in North Minneapolis.

“We conceived this as an urban journal. Like the ‘Journal of Science,’ it’s a place for serious ideas and hypotheses to be argued,” Kosoro explains. “Young people have things to say. Let’s create a place to talk without pressure to be perfect. Not just angry opposition, but creative, pro-active thought, as well as new CD reviews. We don’t proclaim ourselves a black publication. We’re open. A lot of white folks read the Liberator. People say ‘It’s real. It’s not compromising.’ Nothing will be sugar-coated on either side.”

Martin and other Liberator writers knew some of the recent murder victims. “Sterling was killed just around the corner from his house, trying to make curfew. The police precinct [was] just a few blocks away! They left his body lying in the street for three hours! They wouldn’t let my aunt near him. She had to identify his body at the morgue.”

Emerging leadership from the hip- hop generation, like Chaka, the TC artist called I Self Devine, say law enforcement alone won’t end violence. “At base, violence is very profitable. Putting police on the streets, there’s money in that. Putting people in prison—there’s money in that,” Chaka says. “We don’t manufacture these guns! It goes back to violence being profitable,” Chaka observes. “Another thing: when you’re treated like an animal. Police officers get de-sensitized, looking at people like statistics. Not looking at people for what they can be. If you live inside that environment, you don’t even have a free vibe! If this is what you already feel about me, then nine [times] out of 10, I’ll perpetuate that, since I can’t be judged other than that stereotype.”

The Liberator asserts that younger leadership in communities of color is critical and challenges the corporate values that destroy communities.

“Everyone should know by now, it’s probable the CIA flooded urban neighborhoods with crack cocaine in the 1980s, destroying black communities,” says Kosoro. “People’s disengagement from problems in our city don’t see it’s in their self-interest having kids in after-school programs or getting quality education. They only see it when it when they get robbed. Then, their solution is ‘Lock this kid up!’ They’re fighting symptoms with Tylenol, instead of getting to the roots of the problem—which would be to see themselves in these kids.”

The national organization Fight Crime, Invest in Kids advocates for and studies youth programs across the country. Consistently, they find that boys without such programs are six times more likely to engage in crime, pointing out most will continue crime as adults. A Chicago program Quantum Opportunities found that every high-risk youth reached saved $1.2 million to $2.3 million in court, victims’ and prison costs, saving $3 to $5 for every $1 invested in youth.

“In this country, we’re about being independent, being individuals. We’ve strayed from thinking about one another. It’s every man for himself almost,” Dinah Bullock reflects. “I’m increasingly concerned with housing [and how] people of color are moved out of the city … Buildings torn down to build condos. People offered a nice, Richfield town home and don’t think about the big picture. Their child will be in class with only one or two other children like them.”

Chaka, working with HOPE Community, emphasizes that gentrification dismantles communities. He says, “Banks’ redlining [refusing mortgages for targeted neighborhoods], that’s how you start a ghetto … We have to be aware of where the knife’s coming from in our back—and who’s holding it.”

“It appears to me that communities in North Minneapolis are by design. To increase the social service industry, they RECRUITED people from Chicago and Gary, isolating them in a certain area code,” adds “Bob the Janitor,” a TC educator. “It got Hennepin County and Minneapolis large amounts of federal money for ‘violence prevention.’ Keeping violence levels high, they get funds to disperse throughout the state.”

A University of Wisconsin study concluded youth join gangs for protection, status, power and a sense of belonging.

“It goes to what dreams are being sold. As an African-American man coming up, all you see is gang members, athletes and rappers. Personally, I know people who went all through high school getting a GPA that only allowed them to play basketball. Then, they realize, ‘I’m not going to be recruited for college basketball.’ But their GPA isn’t high enough for academic scholarships,” observes the 20-something man from U of M, who calls himself “Winston Smith,” hero of George Orwell’s novel “1984,” echoing concerns about persistent inequalities in public education. “Why isn’t the GPA to play sports high enough to get them to college without playing sports?”

The Liberator writers say college-educated people of color are encouraged to focus on individual careers, recognizing that the collective spirit of the Civil Rights Movement was lost.

“It starts with those of us who’ve been blessed to NOT be in the war zone every day. With that sanctuary comes the ability to strategize,” says Kosoro. “If you’re a pawn out there on the street, you don’t have that opportunity.”