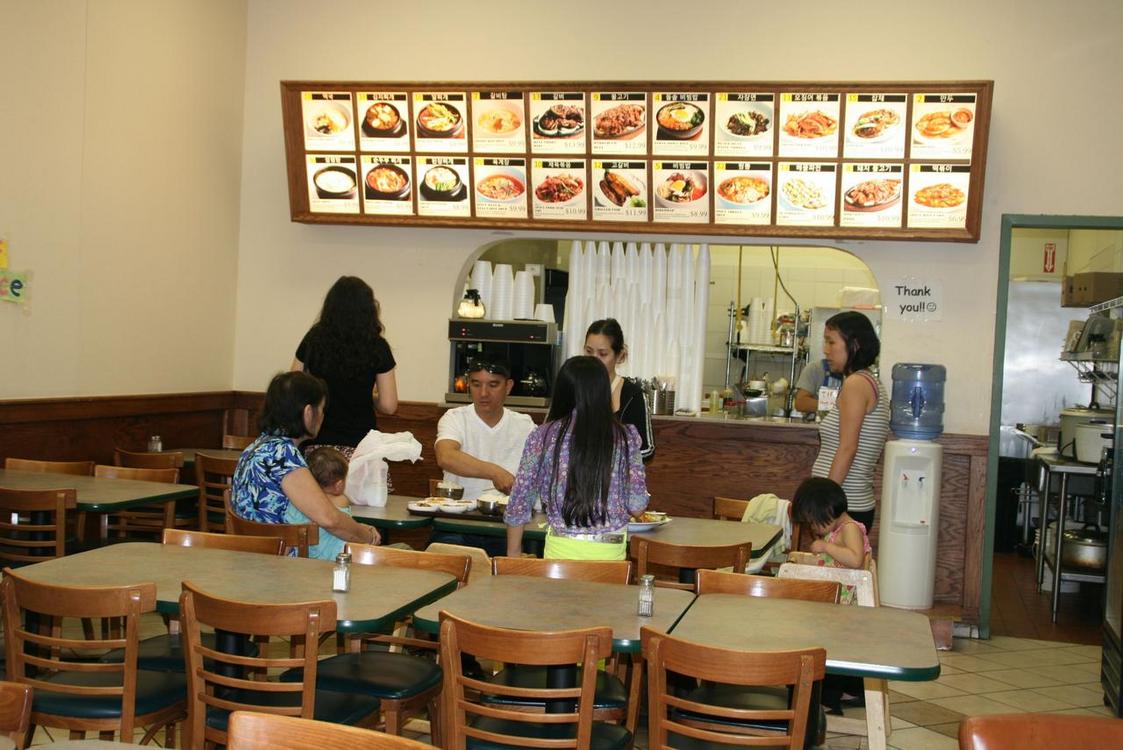 Central Plaza Shopping Center, at 45th and Central Ave. in the landlocked town of Hilltop, is a great place to go for food. Drive down the narrow parking lot and you’ll pass Pooja Indian Groceries, Mike’s Discount Foods, Hilltop Liquor and Tasty Pizza before you get to the separate building housing Dong Yang Oriental Foods and Deli If you are looking for Korean or Japanese ingredients, you’ll probably find them here.

One regular customer, a young woman named Vicki (no last name) had brought a friend, looking for what she called ‘lazy day food.’ Vicki’s heritage is Vietnamese, she said, but she loves Korean food. “You should try the mochi,” she told me, referring to the gooey dessert cakes made from sticky rice and filled with ice cream in the store’s freezer cases.

“I am not usually fond of sweets, but they remind me of my childhood.” There are bottled teas and coffees and soft drinks like Sac Sac Grape and Cinnamon Punch, and one called, simply ‘2%’, peach flavored and very sweet. There are dozens of tins of canned fish on the shelves and an extensive section of frozen seafood including clams in the shell, clams out of the shell, fishcakes, crabmeat and few mysteries of the deep, with labels in Korean.

The store also has of the most extensive selection of dry noodles and ramen choices in town. One, called ‘Just Nu:dles’, (spellcheck that!) in a package that urges cooks to “Make your favorite pizza even more fabulous with Just Nu:dles. No kneading needed.” It also recommends that you ‘Ditch the no fun buns,’ and use the noodles in place of hamburger buns.

In the refrigerated food section are even more noodles, including ovaletts, sometimes called duk-guk or rice cakes, with a chewy, pleasing texture. They’re used in Korea to make popular street food lunches of soups or stir-fry dishes.

If cooking the ovaletts seems like too much work, you can find Korean and Japanese won-ton like dumplings in the frozen food section. Add some of the seasoned pickled side dishes that are often served with Korean meals (garlic stem, squid, seaweed, black beans, cabbage or radish kim chi made in their own kitchens,) a dipping sauce and you’ve got a meal.

Even if you’re not cooking Korean, it’s a fun place to visit. Jennifer and Ron Prasck, from Fridley, came here looking for a sauce they needed to make a quinoa and zucchini salad they’d wanted to try. Prasck picked up a bottle of the ubiquitous Rooster (Sriracha) hot chili sauce and showed it to me. “This might work,” she said.

“That’s technically not Korean,” I told her. Sriracha is technically American, I said. It’s a kind of Thai, Vietnamese and American fusion sauce, invented and manufactured by Huy Fong Foods in California. It’s gained a huge following and is wildly popular with pretty much every demographic around, but has recently become embroiled in a legal controversy. Some in the factory’s hometown are trying to close down the factory because the pepper fumes are making them miserable. Others say the factory brings 50 full time jobs to the town.

“I bet its good and its gluten free,” Prasck said as she put the sauce in her basket. But, what makes Dong Yang special? Hidden in a back corner of the store, in a small, unmarked room as if the owner is trying to keep it a secret, is what might be one of the best Korean restaurants in town. The menu is displayed on a sign above the counter, short of explanations unless you read Korean. You can choose from the outstanding bibimbap, barbequed pork, stone bowl rice, squid stir fry and a lot more. Don’t ask the cooks for details because they probably won’t answer you.

There are unspoken rules at this self-service little place. Order by number. Pick up your tray of food as soon as it’s set on the counter and clean up after yourself. If you don’t, one or both the bossy lunch ladies will yell at you. It’s not you, its just part of the ambience. Pretend you’re in Seoul or New York and you’ll be OK. The eight or so tables are full during the lunch rush.

Dong Yang is owned by Un Joo Kang, a brassy, no-nonsense, businesswoman. This Friday, June 27, she plans to open the Twin Cities newest upscale Korean and Japanese restaurant, Dong Ha Korean Grill and Sushi. It’s location, at 251 1st in the spot where Nami used to be, guarantees that it’ll be popular with the business and the club crowds. Dong Ha won’t replace the wonderful little back-of-the store restaurant,I was promised, but if it’s anywhere as good as the deli at Dong Yang, it should be a success. When you go to Dong Yang, just make sure you enter through the door on your right. Otherwise, you’ll be shopping Harbor Freight for tools, not lunch. And remember – it’s a secret.

Is this the best Korean restaurant in the Twin Cities?

Dumplings for steaming, boiling or frying