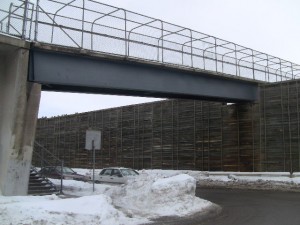 A bridge is more than a connection between two places.

Yes, our very own 24th St pedestrian bridge across 35W connects our neighborhood to Whittier. But did you know it’s also a testament to community activism? You are invited to help breathe new life into the incredible story of our bridge.

When the imminent installation of 35W was announced in 1962, the affected community fervently protested but was summarily dismissed. According to a Minneapolis Tribune article by Ted Kolderie, “Minneapolis finds itself…facing another impossible choice between accepting a highway plan to which a substantial segment of the community objects, and delaying the program again for another study”. Despite the resistance of the (largely minority) community, the freeway project was completed in November, 1967. Residents, who’d been forced to move, experienced extreme hardship in their protracted effort to restart their lives. Those who remained not only lost their neighbors but also suffered through the deafening roar of traffic as they watched the neighborhood disintegrate over the ensuing years.

R.P. Braun, the assistant state highway commissioner at the time, dismissed these concerns (as per, “The Evolution of Whittier”), referring to “a study done by planning consultants in the mid-fifties [that] concluded that no functional neighborhood existed in the freeway corridor.” In light of such unabashed affront to their rights, it’s difficult to fathom what happened next.

In order to reconnect their neighborhood, the community came together, devised a plan and lobbied tirelessly (among them, a primary leader was Pastor Warren Sorteberg, of Our Saviour’s Church at 24th and Chicago Ave.). Their persistence finally paid off in 1971 when the city agreed to install the pedestrian bridge and again in 1974 when the sound barrier walls were built.

Now that is a story we can get behind!

This year marks the 40th anniversary of our forebearers’ incredible achievement. The bridge, arguably one of the area’s greatest assets, has too long been a dark, dangerous, underutilized space. After years of extraordinary challenges, our neighborhood is undergoing a slow, quiet renaissance as numerous micro-communities are emerging. It’s time to reinvigorate the bridge, both literally and figuratively.

The Bridging Minneapolis Project aims to do just that. Neighbor/activist Dallas Johnson launched this project in December. Soon after, MCAD referred two renowned mural artists, Greta McLain and Elissa Cedarleaf. The artists had been developing a similar project so the timing proved serendipitous. They are collaborating with organizations on both sides of 35W to create four-foot circular mural panels that visually convey their answers to the questions, “What is a bridge? How have you been a bridge? How has someone been a bridge for you? What is like to be in transition?…to walk into the future with hopefulness?”. Pending MNDoT approval, the panels will be installed on the freeway wall on both sides of the bridge. (Otherwise, they’ll be installed throughout both communities.) Several funding sources have been identified and a number of communities are already participating (Four groups from St. Stephen’s Catholic Church, Open Eye Theatre, Kaleidoscope Kids, Cultural Wellness Center and Minneapolis Public Schools). Since the project involves panels and not one mural site, additional panels will be added over time.

In order to activate as much participation as possible, the project is multi-faceted. Madeline Douglas is conducting historical research, representatives from local universities are helping with data collection, two community ideation workshops are being held, a mosaic planter is being created (via the Phillips Semilla project [The Alley Newspaper will feature an article in April about Semilla Project]), collaborative, improvisational performances will take place on the bridge throughout the summer and an unveiling ceremony is being planned for late summer…possibly timed with the new 24th Street bike path.

What can you do to help?