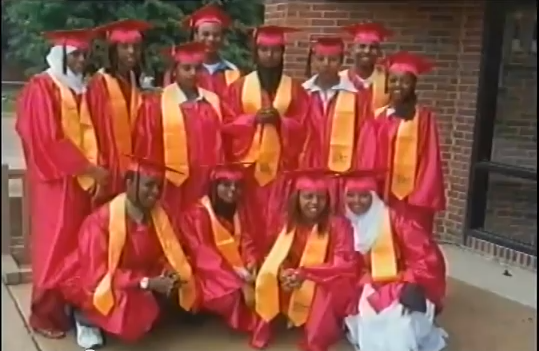 Here’s an unusual high school graduation requirement: students must be accepted into college before they are allowed to graduate. That’s the rule at St. Paul’s Higher Ground Academy, according to Executive Director Bill Wilson.

While the charter school’s students are almost all East African, Wilson says the focus of the school’s curriculum isn’t culture-based. Rather, the school, which used to have a higher African American population when it first opened in 1999, emphasizes strong academics and college prep for whoever comes through their doors.

In 2012, Higher Ground’s population was 99.7 percent Black, according to the Minnesota Department of Education (MDE) and 0.3 percent white. Its enrollment includes almost 700 students in grades K-12.

Higher Ground initially was started as an Afrocentric school, Wilson said, and since it began, the East African population has risen. “Over 14 years, the demographics have changed,” he said.  Their main recruitment strategy is word of mouth.  “If you are doing a good job, people find out about you,” he said. “We don’t actively recruit.”

The school is making investments into its science program, with a new Science, Technology, Engineering, Art and Math (STEAM) lab currently being constructed for use next year. Unlike the traditional STEM acronym, Wilson prefers to use STEAM because he believes arts are “absolutely necessary.” He said they give a sense of culture, but also a dimension of “seeing and doing.” For example, an engineer must use a perspective of being artful when building a bridge. “We function in a way that accesses those kinds of creative sources within us,” said Wilson. “I would submit that you can’t have technology without art,” he said. “Pick up an iPad  without art? I don’t think so.”

The new STEAM lab, which the school is building without any grant funding, will include computers, video equipment and software that integrates art and problem solving.

Wilson says the school was disappointed that though the President has stressed the importance of STEM learning, “the funds have not flown”, but they have come up with a creative strategy to jump start the process through fundraisers to cover the lab. “We want the business community to see that this is the way of the future,” he said.

Charter Schools are “Democracy at Work”

Higher Ground’s English Learner (EL) population (13.2 percent in 2012) is higher than the statewide average (7.7 percent) and lower than the St. Paul Public schools average (36.4 percent). They have a higher number of students on free and reduced priced lunch (95.6 percent) compared to the state as a whole (37.2 percent) and St. Paul Public Schools (72.8 percent), but a much lower number of special education students, as is the case with many charter schools. Higher Ground has only 2.3 percent special education students in 2012, compared to 14.9 percent statewide, and 17.6 percent in St. Paul.

Wilson’s philosophy about special education is that the educator is the special person, because they are trained in a special way to meet the needs of students with cognitive delay, ADD or other special needs.

“The way we approach it, we make no assumptions about the child,” he said. “If their reading or math skills are low, it could be exposure, we don’t know.” First, they give children an assessment to see where their strengths and weaknesses are. “The assessment tells us in what areas they are low,” he said.

The next step is for a child to enter the “accelerated math” or “accelerated reading” programs, which is Higher Ground’s name for Title 1 programs. Once a child graduates from the accelerated programs, that child is quickly mainstreamed. But if he or she is not making adequate progress, then special educators observe the child in the classroom.

“We don’t intend to have children in special ed,” Williams said. “We want to educate and liberate them. We bring special ed and EL teacher into the classroom, so that students can move in a learning environment that is the least restrictive program.”

That’s not to say there isn’t any separation, as during the “accelerated” program, the students may need to be separated, but as soon as they are ready, they are moved into the main classroom, he said.

Perspectives from students and parents

Faduma Hafi-Aweis, a 10th grade student at Higher Ground, has attended the school since she was a freshman. She appreciates the high East African population of the school. “It’s easier to blend in with people you have stuff in common with,” she said. Previously she went to Tarek ibn Ziyad Academy (TiZA), a now-closed charter school.

Mostly, Hafi-Aweis likes the school’s environment, and the interaction between students and teachers.

Though the school is predominantly East African, it’s not a focus of the curriculum, although Haji-Aweis said they do learn about Black History month. The small class sizes allow teachers to give students one-on-one attention, she said.

Abdullahi Aden, another 10th grader, has been attending Higher Ground since he was very young. “Since I’ve come I’ve sort of liked the people here,” he said.

Aden likes everything about the school, except maybe the food.

Both Haji-Aweis and Aden are involved in after school activities, with Haji-Aweis taking courses such as photography, journalism and drama, and Aden playing basketball.

Nimo Yousuf, Hafi-Aweis’s mother, volunteers at the school once a week, on Fridays. She works at the front desk, helping by answering questions for other parents, many who don’t speak English very well.

She appreciates the school and believes it’s giving a good education for her children.  Her son, who graduated two years ago, got a good scholarship to go to college.

Yousuf also likes that most of the students are from their same culture.

She came to the United States in 1996, and said she would return home to Somalia if things in the government became safer. She knows that her children, who were two-and-a-half, one-and-a-half, and 10 months when she arrived, most likely will want to stay in this country.

Her main criticism of the school is that she wishes there was more reading and writing, especially in the younger grades, and she’s upset that the Admission Possible scholarship program is no longer offered.