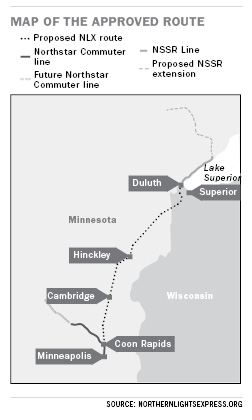 Plans to build a high-speed train line that would connect the Twin Cities with Duluth are gaining momentum.

The Federal Railroad Administration recently approved the proposed route for the Northern Lights Express rail line, which would complete the 155-mile trip in roughly 2 hours and 15 minutes with three stops along the way. The train will travel at an average speed of 70 mph and will have the ability to reach up to 110 mph.

While NLX officials project the rail line will be operational in about five years, other transportation experts guess it won’t be running until 2025.

NLX was first proposed in 2007 but has made slow progress since. It received $5 million from the federal government and $3 million from the state earlier this year to complete preliminary engineering and environmental reviews.

Mark Stenglein, vice chairman of the Northern Lights Express Alliance, said the route approval is a major step in moving the project closer to construction and eventual completion.

The proposed line will begin at Target Field in downtown Minneapolis and stop in Coon Rapids, Cambridge and Hinckley before finally ending in Duluth.

The project’s estimated price tag is $750 million. Bob Manzoline, with the Regional Rail Authority, said that NLX is expected to carry 800,000 passengers annually.

David Levinson, a University of Minnesota civil engineering professor and an expert in transportation studies, disagreed with Manzoline’s ridership estimate. He called NLX an “outrageous” idea.

“The speed is too slow, very few people live immediately on the line and the destinations aren’t that popular,” Levinson said.

Though he believes NLX will eventually be built, he guessed that other rail projects, such as the Bottineau Boulevard Transitway, Central Corridor light rail and the Southwest Transitway will take priority and will push NLX’s opening to somewhere around 2025.

Manzoline said he thinks students will have a “substantial impact” on the NLX’s ridership numbers.

In fall 2010, 643 University students were from cities like Duluth in St. Louis County, according to the Office of Institutional Research. Currently, half of all undergraduates at the University of Minnesota Duluth campus are originally from the Twin Cities metro area.

With a pick-up and drop-off location on campus, University students use Jefferson Bus Lines to shuttle home to Duluth. Jefferson charges between $48 and $59 for a round trip, depending on how far in advance the trip is booked. Those trips vary in length from just under three hours to almost four hours.

University sophomore and Duluth native Kerrick Robinson  usually commutes home using the Jefferson Bus lines once or twice each semester, but said he’d likely ride NLX if it was operational.

Mackenzie Lucca, a University senior from Duluth, said that while she is surprised the NLX is being talked about seriously, she believes it will be successful.

“There are definitely a lot of people that would use this high-speed rail,” Lucca said. “With gas prices as high as they are, this will be a good alternative to driving.”

Gerard McCullough, an associate professor in applied economics at the University and former FRA employee, remains “cautious” that the revenue and ridership estimates will be sufficient to offset the project’s costs.

“You really have to look at the ability of this thing to attract riders,” said McCullough, “I think it will be difficult for this to generate enough revenue to justify itself.”

“We used to have a saying at the FRA,” McCullough said. “If everyone who wrote a letter about how good passenger rails were actually rode them, it wouldn’t be as big of an issue.”

But Stenglein is confident the NLX will be a success.