At stores such as Electric Fetus, Urban Lights and Fifth Element, sitting alongside releases by John Legend, Beyoncé and Pherrell Williams, is a CD of similar quality but greater importance.

“The Next Move” is an 11-track compilation recording featuring students of the High School for Recording Arts (HSRA), 1166 University Ave., St. Paul. The CD, with songs of hip-hop, soul and spoken word, is a poignant offering showcasing the talents of some of the school’s students. But aside from the quality of the CD, more important is the fact that these students were able to produce a product at all because of their individual stories.

HSRA is a public charter school serving students who face overwhelming life obstacles. According to officials with the school, 92 percent of its students live at or below the poverty line and 30 percent have experienced homelessness at some point. Many have dropped out or have been expelled from other, traditional, public schools. HSRA seeks to educate students in core subjects such as science, math and history through musical learning. “The Next Move” is an auditory glimpse into the realities of these aspiring artists … and hopeful high school graduates.

“They wanted to speak from the heart to tell a story of who they are,” said Chadwick “Niles” Philips, instructor with HSRA and the project’s coordinator.

The story is not always a pretty one … but one that needs to be told.

The song, “To Heal …” shocks listeners into a harsh reality with the very first verse by a young lady who tells, “When I was seven my life was ended/by a man who wanted business/he took me in a room/that night I became a woman/hurt, scared at the same time/only my mom was on my mind/he told me if I told, me and my family would die.”

Nicki Minaj doesn’t seem to be spitting out such offerings. If she is, they aren’t the songs that are being highlighted and spoon-fed to the public like other obnoxious, mind-numbing singles we hear on radio every seven minutes. 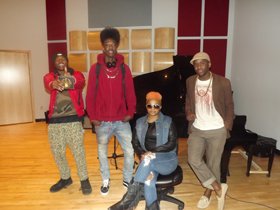 Then there’s the stand-strong anthem, “Essence of Woman” where 17-year-old Enjolidanae “Red Head” Taylor proudly proclaims, “The beauty of a woman must be seen in her eyes/it is the doorway to her heart, the place where love resides.”

“Everything I write comes from real experiences,” said Taylor, who as an emancipated teen will graduate in June. “At first I was like maybe (people) don’t need to know that, but I got comfortable with (telling my story) and it just flowed.”

Taylor also participated in the school’s 26 Seconds Tour that sent her and other students across the Midwest encouraging students to stay in school. According to Taylor, the project title came from the saying that every 26 seconds a teen drops out of school.

Though many of the tracks on “The Next Move” tell the harsh realities of some of the students, several others are upbeat and full of fun and folly.

Such is the case with “Skinny in the City.”

Philips cameos on the track with Sumpter.

“This school has brought out a more positive side of me,” said Ja’Von “Ja’Suvae” Miller, 20. “It showed me that there’s a time to play and a time to be serious. Now I want to go to college. I just want to incline, not decline.”

While every track on the CD could stand alone as a single, standouts are “Where I’m Going,” “Sabatoged Love” and “Vibe Out.” “Sabatoged Love” – a piano-driven ballad – could easily be confused with a John Legend song, and in the right hands, could become an instant hit.

Besides being at a few local record stores, “The Next Move” is also available on iTunes and other download sites. Proceeds from the project go back into the school to help fund its mission of educating through the arts.

Taylor, Sumpter and Miller are all set to graduate this coming June.