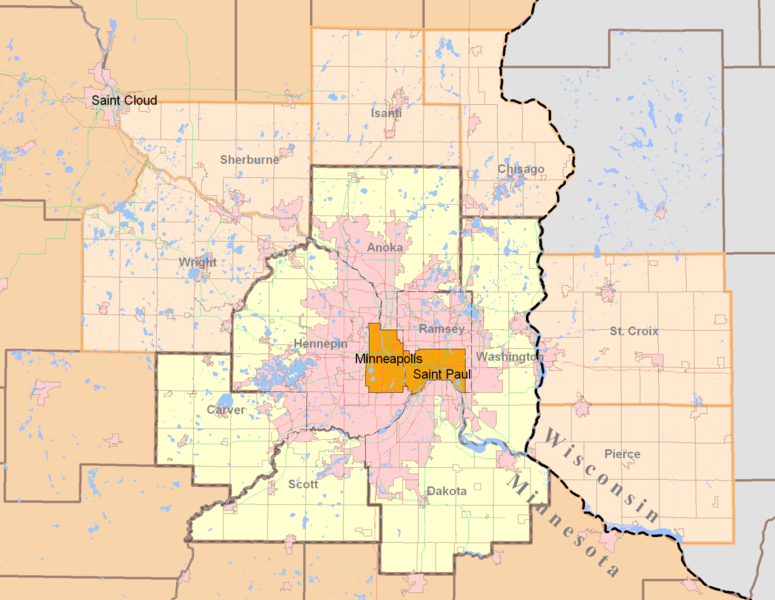 Map by Davumaya﻿. This file is licensed under the Creative Commons Attribution-Share Alike 3.0 Unported license.﻿

Although often left on the sideline in the political discussion on how to improve the economy, public transportation has a major role in getting Minnesotans back to work.  Gov. Mark Dayton, in his May 24 veto of a spending bill, explains: “My budget spared transit funding from cuts due to the critical nature of public transportation and its connection to jobs and the economy.”

Researchers at the Brookings Institute revealed that a typical Twin Cities resident is able to reach only 30 percent of jobs in the entire region in 90 minutes on public transit.  This amounts to a significant spatial mismatch between jobs and people.  In other words, a resident without a car has 70 percent fewer job opportunities than a similar resident with access to a vehicle – a side effect of a sprawling development pattern that disproportionately affects minorities, disabled, and lower-income metropolitan residents.

Although 91 percent of low-income individuals and 67 percent of all Twin Cities residents live near a transit stop, they can still only access a limited number of the regional jobs without a vehicle.  Therefore, the main problem is not bringing coverage to where people live, but overhauling the system to connect more jobs to workers. Any complete approach to regional job recovery must take into consideration the challenging problem of mismatched transit access.

In today’s difficult economic climate it’s hard enough to find a job, but a worker without a car has a mere 1/3 of the options — even with a burdensome 90-minute, one-way commute. A more reasonable and attainable goal for policy makers should be a 60-minute commute.  Currently, job accessibility via transit in less than 60 minutes is even more dismal, with only 13 percent of jobs accessible in 60 minutes.  Given the sprawling nature of metropolitan development during the past few decades, these figures are troubling, but not shocking.

The Brookings Institute’s study also reveals another important development: the suburbanization of poverty. The suburbs now have a larger share of the poor than the city core. Oddly, this reflects a return to the original socioeconomic organization of metropolitan areas when the early suburbs were established. According to urban historian Kenneth Jackson, in the 19th century, “Suburbs … were socially and economically inferior to cities.” Suburbs began as slums, then became the haven of middle-class America, and now some seem be reverting back to slums.

Despite the increase of suburban poverty, low-income Americans still have better access to transit than their middle-income and high-income counterparts, who are less likely to live near a transit stop. Probably because transit develops around those who actually use it, it seems, perversely, as if access to public transit is one of the few advantages that low-income America can claim. However, the onset of widespread sprawl and suburban poverty only increases the challenges that the public transportation system has in bridging the employment gap.

Investing in our public transit system could help bring jobs to those who need them, and could also help the working class by allowing more people to live car-free. Owning, fueling, and maintaining a car is expensive. According to the U.S. Department of Labor, the average American spent about $7,500 on transportation in 2009. A year of rides on Metro Transit costs $700 to $1,000. Enabling Twin Cities residents to greatly lower their transportation expenditures would have a significant impact on poverty levels and quality of life.