Oops - the first photo we posted was a photo of a stray from last year. Here's a photo of one of the "tornado dogs" tended by neighbors. (Photo courtesy of Constance Nompelis)

In the wake of the May 22 tornado, North Minneapolis pet owners faced not only destruction in their homes but also a struggle to feed and take care of their pets. Among the people helping pets and their owners was Kim Carrier, who runs The Pet Project. The first week after the tornado hit, Carrier was working 16 hours a day, alongside a crew of 30 volunteers, handing out supplies to pet owners on the North Side.

The Pet Project is a nonprofit that helps people keep their pets by providing pet food and basic supplies to those who are struggling, and this was their first experience with disaster relief work. Carrier has a favorite story from this time. On the first big cleanup day, there was a dog named Mona who “got into a fight with a chainsaw,” she said. A woman who came in for pet food told the volunteers about her injured dog. She told the story of how the dog had been startled by someone starting a chainsaw, and lunged at it, trying to bite it.  The person holding the chainsaw had backed up, and in the end, the only injury was that the dog’s lip had been cut. “We called her Mona the chainsaw hunter after that.”

The Pet Project handed out about 6,000 pounds of pet food and litter the first week after the tornado, while they were set up at Farview Park, and 20,000 pounds total, including donations they distributed in the weeks that followed while stationed at River of Life Church. According to Carrier, the items distributed included leashes collars, litter boxes, etc. 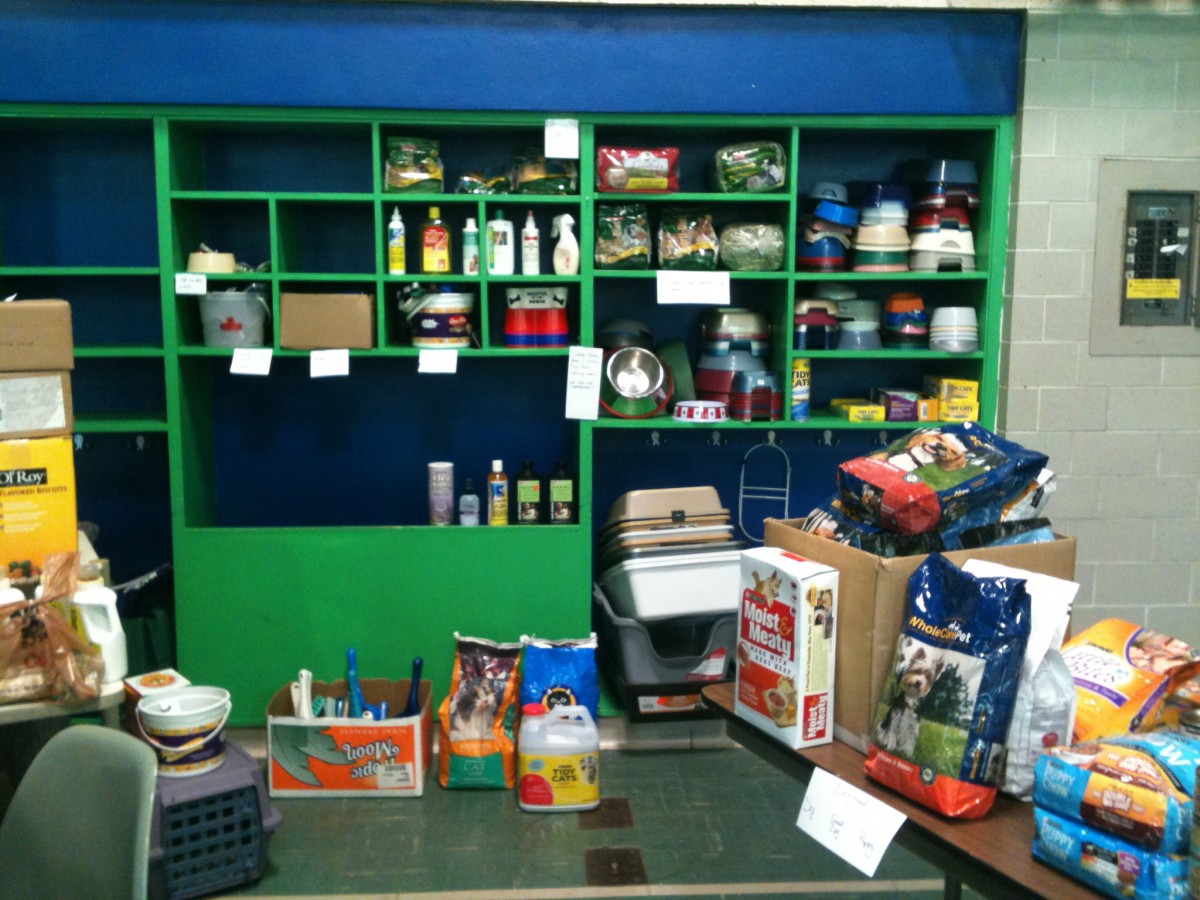 In addition to 12,500 pounds of donations that The Pet Project received from individuals and community groups, they received about two pallets (about 2,200 pounds) from Solid Gold Health Products for Pets.

The Pet Project also helped distribute about five pallets of food (about 7,000 pounds) that was originally donated to members of the Minnesota Partnership for Animal Welfare (MnPAW)﻿ from American Distributors (via Chuck & Don’s).

Many of the MnPAW members donated their portion of the 10,000 pound donation from American Distributors to the Pet Project for their work in North Minneapolis, though some members, such as Minneapolis Animal Care and Control (MACC) used their portion for their own disaster relief efforts.  MnPAW is a coalition of animal advocacy groups, government agencies and pet businesses. Members include Animal
Allies Humane Society, Animal Humane Society, A Rotta Love Plus, Chuck & Don’s Pet Food Outlet, Minneapolis Animal Care & Control, Minnesota Spay/Neuter Project, Pet Haven Inc. of Minnesota, The Pet Project, RAGOM- Retrieve A Golden of Minnesota, and the Tri-County Humane Society.

Minneapolis Animal Care and Control responded to the tornado on May 22 by having officers at the shelter through the night to tend to the animals and assist any residents impacted by the storm, according to MACC’s Program Development Coordinator Jeanette Wiedemeier Bower. They provided five days of no-cost kenneling for any victim of the tornado who needed temporary care of their animals while they were finding housing. They kenneled 75 pets during a seven-week period following the tornado, providing a total of more than 500 days of no-cost kenneling. They also partnered with the Red Cross to offer longer-term kenneling (beyond five days) through other shelters in the Twin Cities, and in some cases made an exception to the five-day limit.

MACC received a pallet of dog food, a pallet of cat food and a pallet of litter from the PETCO Foundation. Joe Wagner, District Manager of PETCO, said that while the corporation has an ongoing relationship with The Pet Project, the PETCO Foundation (a separate nonprofit entity), decided to make their donation to MACC because they were determined to be the lead agency in the relief efforts, because they were housing animals in addition to distributing donations. Wagner said PETCO continued their ongoing program with the Pet Project, which involves collecting donations at their stores.

MACC also received direct donations from Twin City residents for the tornado animals: five four-pound bags of dog biscuits, one bag of 1.5 pounds of rawhides, 10 bags of 4.5 ounces of cat treats, seven kennels, 200 pounds of food, four bags of 50 pounds of Diamond Maintenance dog food, 97 pounds of Royal Canin dog and cat food, 6.6 pounds of Trader Joe’s dog food, 10 ounces of GKC dog food, 18 ounces of GKC cat food, two cans of Gravy Train dog food, and two cans Trader Joe’s cat food. According to Wiedemeier Bower, all of the donations either went to feed dogs/cats who came in during the tornado or were sent home with pet owners when they picked up their pets from MACC.

Wiedemeier Bower estimates it cost more than $10,000 to shelter, feed and provide vaccinations for every animal that was kenneled after the tornado hit North Minneapolis.

Since 2010, MACC has provided no-cost kenneling to victims of domestic violence who are trying to leave violent relationship (for up to five days), according to Wiedemeier Bower. MACC used the same policy and modified it for the tornado emergency.

According to Wiedemeier Bower, as of the last week of July, there were still two tornado dogs staying at MACC, who had been there for six weeks.  “We will not force them to leave when they have nowhere else to go,” she said. “So, in essence, we are still implementing the tornado emergency policy.”

In addition to efforts by organized groups, North Side resident Constance Nompelis says that neighbors worked together in pet-saving efforts following the tornado. Nompelis housed two dogs herself – a boxer and a pit bull that she found ownerless in the neighborhood, and eventually took to animal control. She says there were a great many displaced animals wandering around in the weeks after the tornado, and neighbors helped each other out, using the neighborhood listserve, Craigslist, and a Facebook group called North Minneapolis Pets.

Kim Carrier says that the work of the Pet Project continues.  The work that lies includes getting pet food to “people food shelves,” Carrier said.

The Pet Project is committed to continuing their work on the North Side. They have scheduled an August event with a group called Lug Nuts, which shows kids alternatives to dog fighting. She also said she hopes the Pet Project can get the word out about spaying and neutering pets on the North Side. “From our perspective,” said Carrier, “access to pet food and education are the most important things we can do there.”