The truth is this: I went to the Midtown Global Market on a rainy Tuesday evening to review Pacific Islander Cuisine. We went around 6:00 p.m.–prime dinnertime–but only one person was working at the restaurant, cooking and dishing up all of the made to order food herself. She looked like she was working extremely hard, and the food she was making smelled delicious. Unfortunately, I suffer from what some call the hanger. Hanger is a portmanteau of the words “hunger” and “anger”, that signifies the emotion contained in the moment when your desire for food turns into a hot, burning rage. Or, perhaps it’s just a case of crippling impatience. 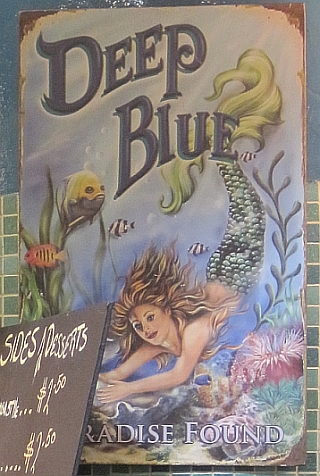 To shield those near me from my hanger, I simply turned around in the aisle at Midtown Global Market and ordered some delightful fish tacos from La Sirena Gorda, which means (hilariously) “the fat mermaid.” Although this was the first time a name had been associated with the restaurant, I had heard a lot about the fish tacos before I stumbled into this dining experience. Whenever tacos are brought up in conversation (which, if you know me, is a lot) friends and strangers alike always ask if I’ve had the fish tacos at the Midtown Global Market. Now, I can grin slightly, rub my belly, lift my chin and say to them, “Why yes. Yes I have.”

The tacos come in orders of two or four. I would recommend always getting four. This is not because they are small, by any means, but rather the tacos come, for the most part, unassembled. If you order four tacos, you get a healthy portion of taco innards, and then four soft tortilla shells. I’m not sure why they do this, but I was glad to be served that way, because I was in control of how full I filled my tacos, and that made me feel like an empowered consumer. If you order two tacos, I assume you will get a smaller pile of fish bits, and only two tortillas. You will also feel strangely incomplete and sad for the rest of the day, so just get four.

Their taco types are as follows: fish (mahi-mahi)–which were incredibly delicious, and include chunks of fried pineapple in addition to fish, making for a nice sweet and savory experience, calamari–which came with fried pineapple chunks, too, as well as jalapeno slices, shrimp and octopus. It seems that not all of these items can be found on their website, so, maybe it was a chalkboard mirage of unbelievable eats that I saw.

Each order of tacos comes with Spanish rice of a quality I have never seen in a place with such quick service, and refried beans that were tasty, too. Because I was hungry, in addition to these included sides, I ordered a beet salad. It was very large in portion, and a nice balance to the fried fish, rice, and beans.

There are plenty of non-taco items served at La Sirena Gorda, including a torta de cangrejo (crabcake sandwich), various flautas de pescado (fish wraps) and an entire tilapia, fried and served to you with a look of surprise.

Between my husband and I, we spent maybe $35, including tip. Although this is a lot for tacos, it’s not a lot for fish tacos, and definitely not a lot for high quality fish tacos on a rainy day in Minneapolis.