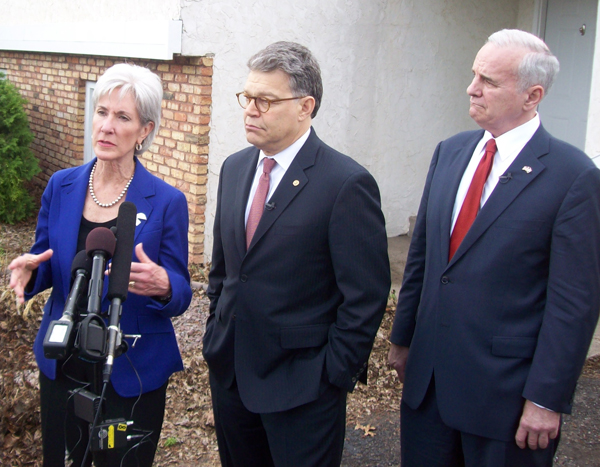 The Affordable Care Act (ACA) in March celebrated its two-year anniversary since President Barack Obama signed it into law.

Since it became law, its key provisions include insurance companies now being more accountable in their practices, providing new coverage for young adults, making prescription drugs affordable for seniors, and covering preventive services with no deductible or copay.

The healthcare law now prohibits insurance companies from refusing to insure children under age 19 with serious illnesses or limiting care because an individual’s expenses have reached a dollar limit imposed by their insurance company.

“A whole new set of rules for insurance companies — a new ball game,” says U.S. Health and Human Services Secretary Kathleen Sebellius during a March 23 visit to the Twin Cities to commemorate the ACA’s second anniversary.

Sebellius, U.S. Senator Al Franken (D-Minn.), U.S. Rep. Betty McCollum (D-Minn.) and Minnesota Governor Mark Dayton all heard stories from several women on how the ACA has helped them at the home of a nurse who lives in Spring Lake Park. However, the “Minneapolis Women’s Conversation” participants did not include any Blacks or other women of color.

The MSR afterwards asked Sebellius and the elected officials to discuss how the health reform law has helped Blacks, who historically have faced significant barriers to accessing affordable health insurance.

“African Americans are far more likely to be uninsured than Whites,” the secretary affirmed. “Having affordable health care for every American is going to be a huge step in closing some of those health disparities because people will have health coverage. They are able to get preventive care and not come through the doors of an emergency room. They will have coverage for prescription drugs. Insurance policies will begin to cover things like colon cancer screenings and mammograms. A higher number of African Americans and Latinos don’t have the kind of coverage that can provide early detection for life-saving illnesses.

“We have a lot of benefits in place,” the HHS secretary continued. “I’m looking forward to 2014. We probably are going to make the biggest dent we’ve ever made in this country toward closing the gaps and healthcare disparities.”

McCollum recalled a conversation with fellow U.S. Rep. Keith Ellison (D-Minn.) on a newspaper article that communities of color historically don’t take full advantage of health insurance they do have. “One of the things my office is going to be focusing on is doing more outreach…to make sure that minority communities take advantage of the opportunities that are out there,” she pledged.

“There are a lot of really good things [in the law] in addressing these disparities,” added Franken.

Recent HHS data released in March says that at least 410,000 young Black adults now have health insurance because they can stay on their parents’ insurance plans through age 26. That number will “continue to grow” when the ACA comes into full effect in 2014, said HHS Senior Advisor Benjamin Sommers in a phone interview with the MSR.

“For over 400,000 people, the law made the difference between the uncertainty of not knowing if they could afford to see a doctor if they got sick, or trying to figure out what job to take…after school,” Sommers said. “[Many had] to focus on where they could get insurance instead of the job that followed their dreams. Their parents [have] to worry about whether their kids will finish school and be able to take care of their needs.

“About 410,000 African Americans now have insurance that otherwise wouldn’t if it wasn’t for the Affordable Care Act,” he continued. “The law made a real difference not only for African Americans but in general across all ethnic groups who found major benefits from the law.”

A HHS spokesman when asked said that currently there is no ethnicity breakdown by state. However, Sebellius pointed out that critics and opponents still spread “intentional misinformation” about the law.

“Starting in the beginning with the debate, a lot of people were frightened by what they thought was going to happen,” Sebellius said. “Seniors were told that if the bill passes, Medicare would be destroyed…

“Two years into the implementation of the law, none of that has happened. Medicare is stronger. There are more benefits and choices for seniors. We also are seeing business leaders and individuals starting to say ‘We want this new market. We don’t want to be at the mercy of one — at most two — health insurers who can charge anything they want.’”

The ACA “is not a government takeover,” said Sebellius, who also disputed those who says the Obama Administration has not been more out front advocating the ACA before and after its passage. “There has been a consistent outreach effort,” she surmised. “I think what we don’t do is run our own television station or radio [station].”

McCollum pointed out, “This is not about big government but insurance companies not dictating to consumers what and what is not covered. Because of the Affordable Care Act, families are now in charge of their health and not the insurance companies.”

“I think there is a certain ideological group in the Minnesota Legislature that says any involvement by government in anything [is bad]. They want to abolish the Department of Health and Human Services in Washington and the department of health in Minnesota,” believes Dayton.

Finally, Sebellius urged consumers to go to the HHS web site (www.healthcare.gov) to learn how the ACA works for them.

“Anybody can go on and enter in some basic facts [such as] their age and zip code, and find out all the insurance options that are available to them, said Sommers. “It also has a very easy explanation of the law.”