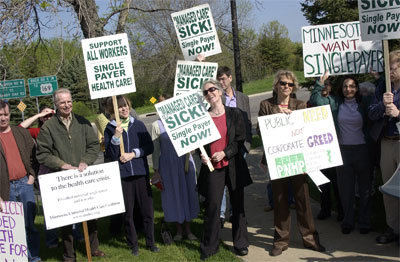 Protesters demonstrated outside the offices of United Health Care.

“It doesn’t seem right for people to make money off of people’s suffering and sickness,” said Tina Masiee, who participated in a protest in front of the headquarters of United Health Care Group on May 2.

The protest was called to bring attention to the problem of the growing number of people in the United States who lack access to health care and health insurance. The action was also organized to bring attention to the disparity between the profits and salaries of the owners and executives of the major health insurance companies and the lack of access to and quality of the health care most working people receive.

“We should judge a society by how it treats its elderly and its sick,” said Masiee.

Masiee is a nurse who has lived with multiple sclerosis since 1987. She explained that she was motivated to participate in the demonstration because of what she described as the “nightmare” she experienced in dealing with United Health to try to get the medication she needs to treat her condition.

She explained that, after having to switch healthcare plans, she was made to wait for months before receiving her medications. Because she did not have her medication, which works to prevent outbreaks of her condition, she experienced another attack.

The number of uninsured grows
The lack of access to health care and medicines is a dramatic and growing problem in the United States and in Minnesota.

According to a January 2006 report issued by the Kaiser Commission on Medicaid and the Uninsured, over 45 million people in the United States did not have health insurance in 2004, the last year for which numbers are available. Moreover, since 2000 the number of uninsured people 65 years and under has increased by six million.

The report went on to explain a number of other unfavorable trends in addition to the number of people without insurance. Some of these trends include:

• Employer-sponsored healthcare coverage dropped by five percentage points between 2000 and 2004.
• Two-thirds of this growth in uninsured adults occurred among the poorer sections of the working class.

• The majority of these uninsured are those who work but whose incomes don’t allow them to buy health insurance.

• Those of oppressed nationalities are uninsured at a higher rate than Whites.

• The uninsured rate among black people is 21 percent.

The numbers and the trends in Minnesota show a similarity to the national numbers according to a report released two weeks ago by the Minnesota State Health Department. According to the report, the number of uninsured people in Minnesota increased by almost two percentage points between 2001 and 2004, from 5.7 percent to 7.4 percent.

While the overall rates of uninsured increased, so did the gap between rate of insurance between peoples of color and Whites, showing the differential impact of the healthcare crises on those of oppressed nationalities. This disparity persists even though the uninsured rate for African Americans dropped during the period under review from 16.4 percent to 12.8 percent.

The biggest jump in uninsured rates occurred among Latinos. In the period under survey, the rate catapulted from an already high 17.6 percent to an astounding 34.2 percent. The rates for whites increased from 4.8 percent in 2001 to 5.9 percent in 2004.

The increase in unemployment in general and loss of jobs that provided healthcare coverage was a major cause for the jump in uninsured rates, said one of the authors of the study, April Todd-Malmolov.

“Throughout the population as a whole, we found that there was a decline in employer-based insurance,” said Todd-Malmolov, the assistant director of the Health Economics Program for the Minnesota State Department of Health. “What we also saw was an increase in public program enrollment in the state.”

Todd-Malmolov explained that one of the reasons why the number of people without insurance did not increase more was because of the existence of public insurance programs. This was especially true for black people.

Fundamental reforms needed
“We need a new healthcare system,” said protest organizer Joel Elbers. “Everybody in, nobody out — not the usual practice.”

Elbers, a working pharmacist and health economic researcher active in the Minnesota Universal Healthcare Action Network, explained that he supports a universal system of federally funded health insurance for all — what he describes as a single-payer system.

“Health care is a public good. It’s a human need and a right,” said Elbers. He discussed other options for providing health care for all, including socializing the entire healthcare system. “Single-payer is a social insurance program that is publicly funded but where medicine is privately practiced. Socialized medicine is where the government owns the healthcare system.”

Elbers said that would prefer a socialized system because it would be more efficient; however, he believes that fighting for a single-payer system would be more politically realizable.

“Our views on some important issues are identical, like universal health care,” said United Health Care’s Lindsay. “The only thing that differs is the financing mechanisms they propose. There are some who believe that the federal government should run the system, some that the system should be left in private hands. I don’t think the two positions are completely inconsistent.”

Share your views on health insurance in our “Wellness forum”:https://www.tcdailyplanet.net/forum/71