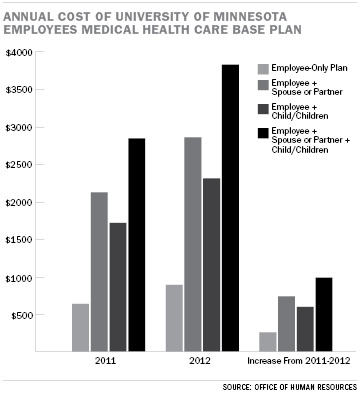 Because he is gay, Benjamin Munson has less take-home pay than a University employee with an identical base salary. In 2007-2008, Munson said he had to pay about $1,200 in additional taxes because he has health care for his partner.

The Internal Revenue Service does not recognize same-sex partners as dependents, so their benefits are counted as taxable income. The health care costs of spouses of heterosexual employees are not.

Since same-sex marriage is also not legally recognized in Minnesota or at the federal level, same-sex domestic partner benefits must be reported as imputed income, said Dale Carpenter, a professor in the University’s Law School who specializes in sexual orientation and the law.

Munson doesn’t blame the University, but he said the issue is something the school could fix to comply with its promise of equality to gay, lesbian, bisexual and transgender employees.

“Two people at this University have different take home salaries because of one of them is gay and one of them is not,” said Munson, an associate professor in speech, hearing and language sciences.

“It’s a matter of basic humanity that we attempt to be balanced in how we treat one another and benefits are simply one dimension of that,” Miner said.

The tax on benefits has created financial hardship for some GLBT employees.

David Valentine, an associate anthropology professor, estimated he was taxed about $9,000 in the year and a half his husband was on his health care plan — calling it a “chunk of change.”

Valentine, who legally married his husband in Massachusetts, said the income loss because of the sex of his partner, combined with the economy, created financial problems.

“It was a struggle for a while, and that didn’t help,” he said.

As the University increases the cost of health care for its employees, the taxable cost of same-sex domestic partner benefits increases as well.

He has attempted to correct this in the past because the University is “behind the curve.”

Private institutions like Google and Bank of America are reimbursing employees with same-sex domestic partner benefits for the taxed money.

In 2008, a resolution to have administration develop a “mechanism” to make up the tax difference for University employees with same-sex domestic partner benefits was passed by the University Senate.

With a new president, Munson said now the issue might need to be picked up again.

He said if the University wasn’t willing to foot the bill for the handful of faculty with same-sex domestic partner benefits, a small amount can be taken out of the paycheck of employees who are legally married.

Valentine said the prospects were dim that this could be resolved anytime soon, given the financial condition at the University and the federal political climate.

For Munson, the real solution to the problem doesn’t have to come from the paychecks of University faculty.

“If anybody doesn’t want to give up an extra $1 a pay period … then you can say, ‘OK, that’s fine if you don’t want to do that, but make sure you vote for gay marriage,’” he said.

Health care benefit costs for University of Minnesota employees will see a major increase in 2012.

As the University faces budget cuts, employees have to make up for the difference in their medical and dental benefits.

For some, that could be an annual increase in medical benefits of almost $1,000, according to data from the Office of Human Resources.

For an employee on the base with the “low cost” plan for individual health coverage,, the cost will increase about $200 annually to about $889.

Add a spouse or partner and children to the base plan, and it increases by almost $1,000 annually to about $3,800.

Due to a “significant hit” in legislative support to the University, the UPlan Medical Program had to cut its expenses by 5 percent in 2012 — a $12.7 million savings for that year, said Dann Chapman, director of employee benefits in the Office of Human Resources.

The University has been consistent for the past few years in the percentage it pays of employees’ health care premium, according to OHR spokeswoman Lori Ann Vicich.

The percentage that the University pays of employees’ healthcare costs will decrease by 3 percent to 87 percent in 2012 for employee-only medical benefits on its base plan. It will go down from 4.5 percent to 80.5 percent of the cost for all family-coverage options.

That is a more than $700 increase annually healthcare premium for employees with medical health coverage on the base plan covering him or herself and their spouse or partner — it will go up to about $2,850.

Chapman said the increases are higher if employees opt for a more expensive plan, which gives them access to more providers.

“Savings suggests I have more money in my pocket next year than I do this year, and that’s not so. I’m just not going to spend quite as much next year as I would have done,” Chapman said.

He said healthcare premiums increase for both the University and employees almost every year due to nationwide medical trend inflations, which jack up the price of health care — a 6.5 percent increase this year.

Chapman said the new system will make employees pick up most of the dollar increase.

He said the older demographic at the University also drives up the cost-per-individual for the plan because they utilize health care benefits more often.

He said while there will be an increase in 2013, it will not be a cost-shift of this magnitude.