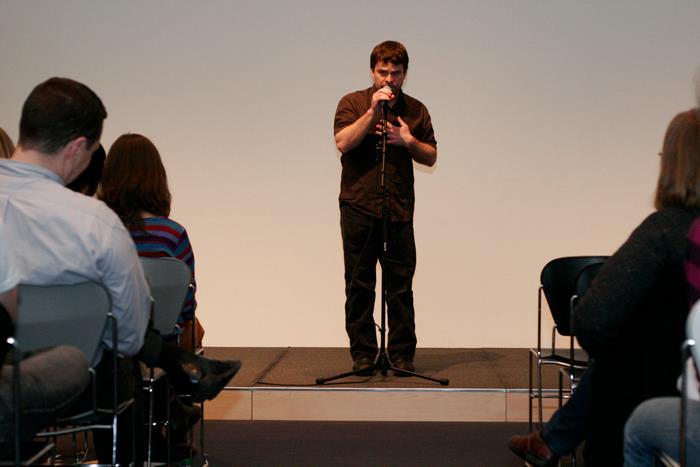 On February 22 the literary community in Minneapolis finally got to taste the fruits of the collaboration between Hazel & Wren and the Weisman Art Collective. Words at WAM marked what I hope is the start of, as they say, a beautiful friendship between the Weisman Art Museum and various literary organizations in the Twin Cities. As it stands, I am so impressed with the decision of WAM to reach out to an organization like Hazel & Wren to offer them some of that good old Minneapolis hospitality.

The event was like many others I have been to in the Twin Cities, but this time with some sweet Hazel & Wren flair, like pre-written one-line bios for open-mic readers and an on-deck staging area to limit the waiting time between readers. My personal favorites from that pool came from the lovely brains of Patrick Nathan, a friend of mine; Timothy Otte, a staff member at Hazel & Wren; and Jeffery Skemp.

Though I had never heard him read previously, Nathan’s writing has been described to me by a mutual friend as “prolific,” and based on the tidbit (he usually writes very long-form fiction) I heard, I am very inclined to agree. Otte, who I hadn’t recognized as a member of the Hazel & Wren staff, read a fantastic series of three poems on, what I assume is the tormentedly beautiful nature of being young, artistic, and male here in the natural bounty of the Midwest. Finally, Skemp presented to us a crowd-boggling poem about the beautiful, and simple rockfish, dwelling at the bottom of the Bering Sea. It was silly (and finally felt as such once the audience decided to get into the poem, realizing it was okay to giggle), but had a type of gravity that perhaps only worked because of Skemp’s deep voice, and slow, halting style of reading.

Just as a side-note, I was very disappointed to see some of the open mic-ers leave after that segment was over. R.U.D.E.

The second half of the night promised two “rock stars” of the local literary scene, Lightsey Darst and Miles Walser. I’m friends with Lightsey Darst, and participated—rather spontaneously—in her reading, so I cannot comment on whether or not the piece (which featured some main readers, and a group Darst called the “whisper choir” moving around the room in various directions) actually worked. What I can say for sure is that the work was a bold choice, and I respect any artist who doesn’t stagnate.

There has been some internet conversation about the second reader, Miles Walser, and his poetic style, content, and tone. Walser was the first of the two rock star poets to read, and was very clear at the outset that the reading would be a loud (for us) and emotional (for him) experience. His three poems, each one seeming to bring the poet to a shaking and near-tearful climax, ranged in subject from a failed relationship, to a politically motivated discussion on the violent nature of slang terms for sex, and his father. While I don’t believe that this is the correct venue to air my arguments in Miles’s favor, what I will say is that everyone should just be cool. Let the artist live, man. If it’s not your bag, then so what? Politically motivated art is meant to get the public at large thinking, and even if it’s got some people pissed off, Walser’s poem about “rape culture” got people talking. Right on.

My final word on the night is that for Hazel & Wren’s first event, this was a total hit. They took some chances—with readers, location, method alike—and it really paid off. The organization is really turning into something amazing. I hope everyone is paying attention.