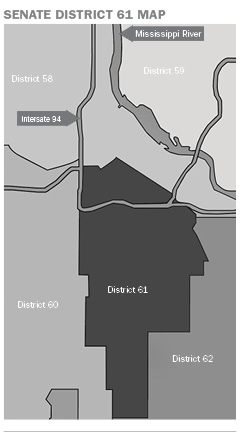 Democrats lined up for the chance to fill the Senate seat vacated by former Sen. Linda Berglin, who stepped down in August after 30 years on the job to take a position with Hennepin County.

Hayden will run against Republican, Green Party and Independence Party candidates — none of which held their own primaries — in the special general election Oct. 18.

He soundly won the DFL primary with roughly 60 percent of the vote. He entered the contest with endorsements from Berglin, Rep. Karen Clark, DFL-Minneapolis, and from the DFL party, which voted to endorse Hayden with 27 of 32 votes.

Senate District 61 includes parts of south Minneapolis and runs all the way up to the Cedar-Riverside neighborhood.

Hayden’s victory was part of two special primaries in the state Tuesday. Both Democrats and Republicans vied in primaries for former Sen. Linda Scheid’s seat in Senate District 46, which covers Brooklyn Park and Brooklyn Center. Scheid passed away from ovarian cancer in June.

Chris Eaton won the DFL primary in District 46 with 89 percent of the vote, while Republican candidate Cory Jensen secured his party’s nomination with 85 percent.

Berglin, a Democrat renowned for her expertise in health care, announced in July she was leaving the Legislature for a job with Hennepin County as Health Program Policy Manager.

After Republicans won control of both legislative bodies in the 2010 election, Berglin said she felt her “talents and skills were underutilized.” She served in the Minnesota House of Representatives for eight years prior to being elected to the state Senate in 1980.

Her unexpected announcement in late July and the relative quickness of the primary gave most candidates little time to prepare.

“Candidates had to work very quickly to reach voters,” said Kristian Heuer, one of six who competed in the primary.

Hayden has been representing District 61 in the House since 2009.

Many south Minneapolis residents, including some candidates in the Senate primary, are already preparing to run for Hayden’s House seat should he get elected. Heuer said he would most likely run for the House seat.

District 61’s next senator will not have the same seniority Berglin had, but would be able to serve on the same committees, Berglin said. She served on the Health and Human Services Committee, among others.

Berglin said she endorsed Hayden because of his experience representing the district in the House.

“He also has a great deal of compassion for individuals who are in a disadvantaged position,” she said.

After a forum between the six DFL candidates last week, Hayden said the district needs a “progressive, experienced voice.”