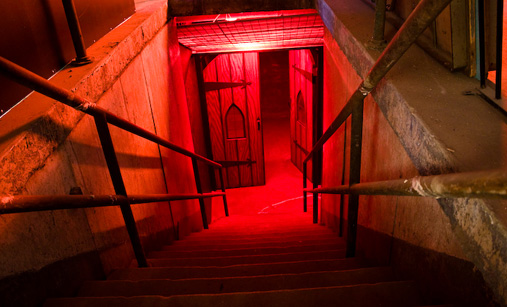 Tonight I went to my first ever Haunted Basement at the Soap Factory. It was my first ever haunted anything. Being you know, an adult, I wasn’t expecting to be scared. Perhaps I was hoping to be frightened just a little, just to see what it would feel like. I did scream a couple of times, but usually that was because I was surprised. I did enjoy myself, however. There were some parts that were really cool.

Actually the only time I was actually frightened was in the beginning as I was walking down the stairs.

Wait. Back up. That wasn’t the beginning. The beginning is when you are standing on the porch and you are waiting to go inside, and you hear all this screaming and scary noises, building your anticipation. And then of course you have to go in and sign a waiver. I didn’t read it. They know we can still sue them if we get hurt, right?

So yeah. After you sign the waiver you go down these stairs. That’s the part where I was scared. I was afraid I was going to trip. It was completely black. I was thinking about how they handle elderly people or people with disabilities. I mean, it seemed kind of dangerous.

We were told to stay with our group. But the thing is, I had a rather adventurous group. People were constantly wandering off and I kept on ending up by myself. But that was okay because then the actors came and scared me one on one. I swear to God someone licked the back of my neck, but maybe they just breathed on me.

My favorite parts weren’t the parts that were scary, but rather that were just neat. Like, for instance, the small room that spun around once all the group members were inside. That ‘s one of the places where I screamed.

I also really liked the room full of bottle caps that you had to walk through. And the fluorescent spider web room. And I loved the hallway that kept getting smaller and smaller as you walked through it. Again, it was pitch black. That part actually scared me a little—I’m a bit claustrophobic.

There were quite a few clowns in the Haunted Basement. I liked the first one. It surprised me. You could barely make him/her out, but underneath the darkness you could see the whole room was this distorted clown nightmare. Other clowns throughout the tour didn’t impress me as much. One can have too many scary clowns, don’t you think?

I also didn’t like the gory bits. There were some really disgusting videos that just grossed me out. But I guess some people are into that kind of thing, so maybe they would like it.

The last part of the tour was the maze. That was great, although I definitely lost my group and got frustrated and thought I might never see the light of day. Thankfully, I survived, and am here to tell the tale.