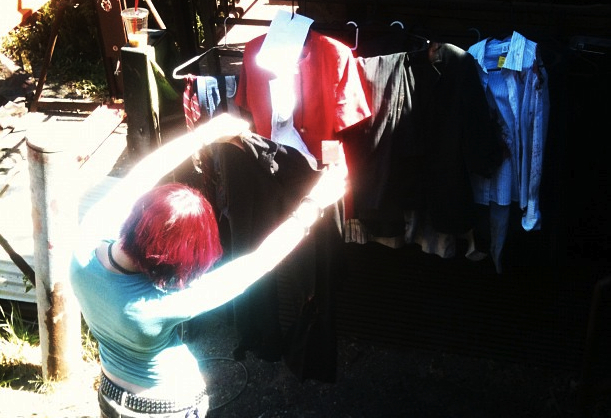 There’s nothing in the world quite like the annual Haunted Basement at the Soap Factory: an übercreepy haunted house that’s also a multimedia art installation, a multi-month creation by some of Minnesota’s most talented visual artists and theater artists. The experience is totally different every year, which is one reason why it’s so creepy—and why, every year, it’s one of the hottest tickets in the Twin Cities.

In 2010 the Haunted Basement spawned an unofficial spinoff of sorts: the Haunted Theater Basement (later renamed simply the Haunted Theater) at the Music Box Theatre, then being rebranded as the Loring Theater. Last year theater artist Noah Bremer—cofounder of Live Action Set and formerly a touring perfomer with Cirque du Soleil—was among a group of artists who took charge of that project and created a Cold-War-themed experience set in 1962.

The Music Box Theatre has since succumbed to the Bakkers’ Curse and is once again hosting Triple Espresso (shudder), but Bremer has moved up to the Soap Factory, where he’s directing this year’s Haunted Basement. What will lurk in the Soap Factory’s depths this year? Bremer assures me that “people are going to be freaked out,” and I also witnessed some bra-burning a couple of weeks ago outside the gallery (see above; “There are going to be some abused office workers,” commented the artist), but no one will really know until they take the plunge.

I’ll be among the first group of daring souls to descend to the depths on October 5; presuming I live to tell the tale, I’ll write a report to give you a sense of how it goes, without revealing too many secrets. (Update: I survived! Here’s my story.) In the meantime, you can read (and watch) our coverage of previous years’ Haunted Basements.

Melissa Slachetka visited the Haunted Basement in 2008. “Rooms that spin, trails that are encased in darkness, flashes of distracting light, walls that try to grab you, and, back by popular demand from last year, the corn room.”

In 2009, Erik McClanahan went behind the scenes and shot a video of the horror in progress.

In 2010, we sent Sheila Regan down. “I swear to God someone licked the back of my neck, but maybe they just breathed on me.”

In 2011, we published Haunted Basement reports from both an unimprssed Heidi Schatz (“Save yourself the cash and rent a few scary movies”) and Nicky Stein-Grohs, who “managed to only scream a few times, and did not pee, cry, or vomit.”

The strangest Haunted Basement story of all: on Halloween night 2011, Benji Conklin and Carrie Fisher met for the first time while playing their roles as subterranean ghouls. 11 days later, they were married. Did the marriage last? Well, let’s just say that even if you have a ticket to the Haunted Basement, you probably don’t want to cancel your OkCupid membership just yet.