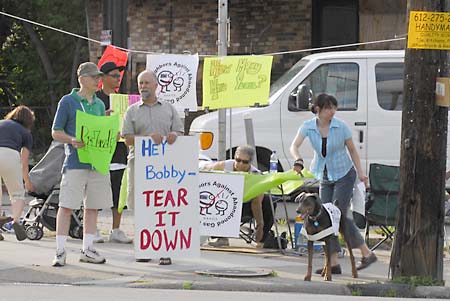 Citizen action at work in Harrison Neighborhood to get rid of blighted gas stations.

The Harrison Neighborhood has made it quite clear—they have had enough. The gas stations abandoned for nearly 20 years at the corners of Glenwood and Penn avenues and Glenwood and Girard avenues are owned by Bobby Williams. Mr. Williams is Bobby from Bobby & Steve’s Gas Stations. A chain of these stations are sprinkled throughout the Twin Cities.

The Glenwood Avenue blighted properties have been the scenes of shootings and drug deals for the last two decades. A random shooting in broad daylight on April 27 at the Penn Avenue gas station site renewed interest, pushing the agenda to get the stations removed. The number-one issue on residents’ wish list is removal of the abandoned gas stations. These abandoned properties are spiritual and financial drains on a neighborhood trying to pull itself up by the bootstraps.

In May, activists in the Harrison Neighborhood formed NAAGS (Neighbors Against Abandoned Gas Stations). NAAGS is a campaign by the residents of the Harrison neighborhood to address major changes needed to proceed with redevelopment activities along Glenwood Avenue. NAAGS has organized a telephone, e-mail, petition and letter-writing campaign called “Tear it Down & Clean it Up.” The campaign intends to make Mr. Williams and the city fathers aware of Harrison Neighborhood’s concerns with these eyesores.

The most successful and visible activity NAAGS has undertaken is the weekly happy-hour sit-in on Tuesday from 4:30 to 6:30 p.m. and Saturday petition-signing demonstrations, in front of the Glenwood and Penn Station. More than 15,000 people drive through the neighborhood on Penn Ave. every day. NAAGS asked drivers to sign their petition to get rid of the ugly gas stations. During the first Tuesday two-hour demonstration the group gathered nearly 200 signatures.

Queen Care Center across the street is being renovated into the new housing project—Ripley Gardens. New streetlights are set to arrive on Glenwood Avenue this summer and a Master Redevelopment Plan for Bassett’s Creek Valley is winding its way through City Hall. These changes and more are planned for Glenwood Avenue and the Harrison neighborhood. Blighted and abandoned buildings reduce the impact of the neighborhood’s efforts.

Repeated attempts to contact Mr. Williams prior to these bellicose public demonstrations were not successful. However, within the week some secondhand questions from emissaries of Williams’ have been asked about the neighborhood’s plans for these sites.

Perhaps NAAGS is making a difference.