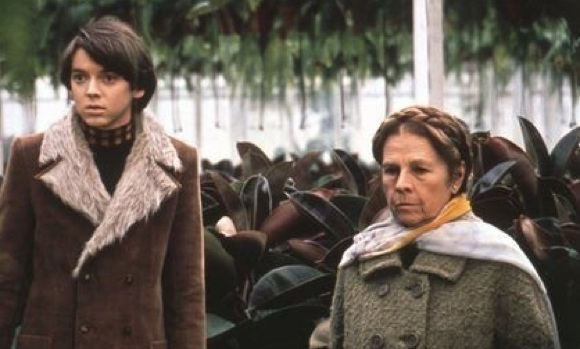 When I presented my first “Defenders” selection back in August of 2011 at the Trylon Microcinema, someone asked me what movie I’ve seen the most times. There are a few that come to mind: Back to the Future, Drugstore Cowboy, Ed Wood, Babe, and Harold and Maude. I’ve seen Harold and Maude three or four times in the theater—most recently when it was shown as a midnight movie at the Uptown in March of 2006—but I’ve probably seen it over a dozen times in total, including annual screenings on DVD. While I consider a dozen times a lot for watching the same film, that’s nothing given that Harold and Maude screened at the now long-gone Edina Westgate Theater (located at 4500 France Avenue, now Edina Dry Cleaners) from 1972 through 1974, for an astronomical 115 weeks and 1,956 screenings!

This Wednesday, March 21, the Heights Theatre will honor the Westgate Theater by screening Harold and Maude to celebrate the 40th anniversary of its incredible streak.

The term “cult classic” gets thrown around a lot, but Harold and Maude is one of the true cult classics, and, in fact, could have been one of the very first films to receive that moniker. It’s is one of the most original and unorthodox “romantic comedies” ever produced. I put those words in quotes as it is a hard film to categorize, but those are two that come to mind. Not only does the film offer a warped look on romance, death, funerals, and pranks, it still holds up as one of my favorite films ever and one of the best films of the 1970s.

In the opening moments, we see the preteen Harold (Bud Cort, who later said the miraculous run of the film at the Westgate helped his own acting career) putting on a vinyl record of Cat Stevens’s “Don’t Be Shy” playing. It sets up the film perfectly as Harold is about to do the unthinkable: hanging from a rope in a staged suicide. While we never see Harold’s head until the credits are over and we have no idea what is happening until he kicks over a footstool, his mother (a wonderfully stuffy Vivian Pickles) comes into the room and says, “I suppose you think that’s very funny.” It’s still a chilling and provocative scene, every time I see it, yet I still laugh knowing what is to follow. We learn shortly after this scene that Harold is obsessed with death and craving attention. Immediately following his first staged suicide, he is right back at it again, lying in the bathtub with fake blood covering the room and walls, until his mother replies, “My God, this is too much. I can’t stand much more of this,” but Harold’s demented humor continues to grow.

Once Harold meets Maude (a glorious Ruth Gordon), an 70-something woman who keeps showing up at funerals like himself, they become interested in one another, and so begins one of the most touching romances in film history.  As their friendship grows, so does their love toward one another, and the more mischief these two kindred souls come up with, the closer we feel their connection.

The film, directed by Hal Ashby (Bound for Glory, Shampoo) from a first-time script by Colin Higgins, also features an amazing soundtrack by Stevens. I don’t know whether a film like Harold and Maude would get made today by a major film studio.  A few years ago, there was talk of a remake, and I hope that never happens, as this is still a truly remarkable original film and I would probably boycott a newer version. The film was a commercial flop for Paramount Pictures when it was released in December of 1971, although both Cort and Gordon received Golden Globe nominations for their performances and it’s been cited by the American Film Institute as one of the funniest films of all time.

The Heights is only showing the film once, and if you can’t make the screening, there is good news on the horizon for DVD/Blu-Ray collectors. Harold and Maude has been out of print for many years, but the fine folks at the Criterion Collection are going to be releasing a new remastered version of the film on June 12.

Harold and Maude may not be for everyone, as it deals with death and romance in morbid ways, and my mother still says, “It is one of the strangest movie’s I’ve ever seen.” It still feels as honest and touching today as it did when I first saw it, and I’d happily watch it at least a dozen times more.