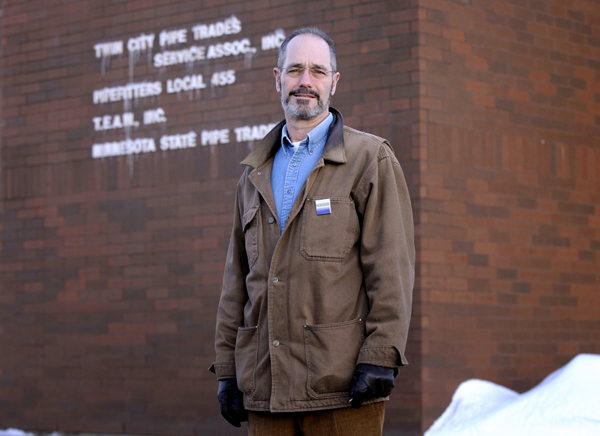 Call it a sign of the times: the man in charge of passing employment bills has become an unemployment statistic.

Rep. Tim Mahoney (DFL-St. Paul), who chairs the House division that focuses on workforce development, lost his job as a pipefitter last fall.

“Typically, I work right up until session starts,” Mahoney said. “This year, I believe it was Oct. 1 that my last construction job was.”

It’s a common story for Minnesotans who work in construction. The industry has been especially hard hit by the so-called “Great Recession” that has left nearly 218,000 Minnesotans looking for work.

Mahoney has his salary as a House member to fall back on; still, he said his experience has been “difficult and interesting.”

“Any time you lose an income for four months, it’s quite a pinch,” he said.

He isn’t the only one feeling the pinch. This year, lawmakers from both parties have put jobs and the economy at the top of their legislative agendas.

“We believe it’s very important to do all that we can at the state level to put people back to work,” she said.

Kelliher pledged quick action by the Legislature on the capital investment bill, and said Gov. Tim Pawlenty has committed to work with legislative leaders in a bipartisan way to sign a bonding bill early in the session.

“We’re going to take the governor at his word, that he’s going to work with us,” she said.

During the interim, members of a special bipartisan House Jobs Task Force called on the expertise of economists, small business owners and community leaders to discuss ways to reduce unemployment. A list of 41 different “legislative options for creating jobs,” resulted, ranging from direct spending programs to tax credits to regulatory reforms.

Many of these ideas have now been incorporated into the three-part plan. The bonding bill, HF2700, sponsored by Rep. Alice Hausman (DFL-St. Paul), contains nearly $1 billion in funding for “shovel-ready” construction projects – something State Economist Tom Stinson said is likely lawmakers’ best bet at creating jobs in the short-term.

A floor vote on that bill might come as early as Feb. 15. Though Pawlenty supports a bonding bill, he has called for a much smaller package of $685 million in general obligation bonding. He has the option to trim a bonding bill down using line-item vetoes; however, he has publicly threatened to veto the entire bill if he thinks it is too large.

Rep. Ann Lenczewski (DFL-Bloomington), House Taxes Committee chairwoman, said the tax part of the plan will likely include an angel investor credit that has bipartisan support, as well as a historic building rehabilitation credit and an expansion of tax increment financing for local development projects.

The third bill, which has yet to take shape, will be sponsored by Rep. Tom Rukavina (DFL-Virginia), chairman of the House Higher Education and Workforce Development Finance and Policy Division, and will likely include a wage subsidy program similar to one being proffered on the federal level by U.S. Sen. Al Franken. Minnesota used a similar program in the 1980s that paid employers to hire new workers, and Rukavina thinks it can work again. The problem, he said, is cost.

“I tried passing it last year, but of course last year there was no money. And there’s no money this year, to be quite frank. It’s hard to find money,” Rukavina said.

With that in mind, he’s also looking at a number of other economic development reforms, such as loans for manufacturers for purchasing new equipment, converting municipal power plants to wood-burning facilities and storing state money in community banks instead of large-scale institutions.

Members of the House Republican minority tried to get a head start on their own plans to grow jobs in the state. On Feb. 8, Rep. Mark Buesgens (R-Jordan) made a motion to suspend the rules so that the House could vote on a bill to eliminate Minnesota’s corporate franchise tax. The motion failed 81-46.

Rep. Sarah Anderson (R-Plymouth), the House’s lead Republican on workforce development, said Minnesota’s tax and regulatory environment is pushing employers across the border to Wisconsin and other states in search of a more hospitable environment.

“We are an unfriendly environment to businesses. We’ve had countless businesses tell us this, time and time again,” she said.

While she appreciates the DFL’s focus on jobs, Anderson said there needs to be a greater focus on the needs of business owners, whom she argues are the only true source of long-term job growth for the state.

“We’re going to hear two sets of proposals that really show the difference between the DFL strategy of a state version of a stimulus package … versus our Republican minority packages, which are going to focus on the private sector,” he said.

For the moment, Minnesotans looking for jobs can do little else but wait. As of December, the seasonally adjusted unemployment rate stood at 7.4 percent – down from its peak of 8.4 percent in June, but still higher than at any other time since the early 1980s.

Moreover, the state’s labor market appears to be headed for a sluggish recovery. At the release of the state’s most recent budget forecast in December, State Economist Tom Stinson said total employment in the state may not return to pre-recession levels for several more years, and workers’ wages are declining in the meantime.

As for Mahoney, he hopes to find work after session ends, but said he may have to leave the state to find it. He hasn’t had to travel to find work in 20 years, but he’ll go this summer if he has to – anyplace there’s a new pipeline, water treatment plant or refinery being built, he said.

“Wherever it is, if I want to work, I might have to travel there,” Mahoney said adding, “That will be interesting if I’m trying to run a re-election campaign at the same time.”