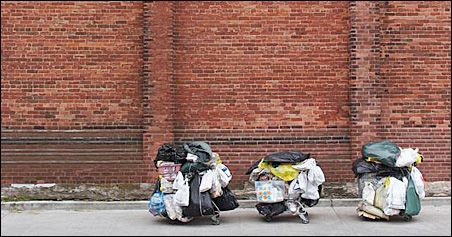 The number of homeless in Minnesota on any given night is believed to be more than 13,000.

Simone Hall didn’t yet know the names of her legislators, but she’ll be joining a contingent of other formerly or currently homeless folks intending to speak their minds at the state Capitol.

“Being a person formerly homeless, I know the situation,” said Simone, a 39-year-old mom who started out homeless in Texas, moved to Illinois and now boasts a permanent Minneapolis address.

“I’m doing it mainly because people need to understand that the more that we cut out jobs and other things to help people better themselves, you’re going to have homeless people,” she told me.

Hall is one of “carloads” of people coming from all over the state, about 300 people, to Homeless Day on the Hill, a regular get-together for some years now and designed to demonstrate to legislators that “maybe homelessness isn’t just the guy on the street corner with a card board sign,” says Liz Kuoppala, executive director of the Minnesota Coalition for the Homeless.

Yet, there’s $5 billion worth of red ink on the state books this session and a lot of competition for scarcer dollars as well as a predominantly no-new-taxes climate. Still, Kuoppala has hope: “We have friends in both parties who have been strong champions,” she says.

“We want people to come and tell their story,” Kuoppala says, to get up close and personal with legislators, you might say, and talk about the continued need for financial support for programs that help prevent family homelessness, for shelter programs, short and long-term transitional housing, as well as income support for single adults who cannot work. They could be applying for Social Security disability for instance, she said, and need the aid of a state check for $203 a month helping toward paying for rent, groceries and toilet paper.

Nobody’s asking the middle or higher income folks to “give up their toilet paper,” she says, getting pretty basic in her approach.

“We totally support people working,” Kuoppala adds, but some cannot work for medical reasons and there’s a “misunderstanding that somehow these are people living high off the public dollar.”

The coalition she represents – a grouping of 150 service providers from around the state – as well as advocates from Plymouth Church Neighborhood Foundation will make their case for maintaining funding.

You’d think the coalition might feel the heat of intense competition for scarcer dollars, and that social service providers might feel pitted against one another, but she says:

“I don’t feel pitted. I feel we’re all in this together. It doesn’t help us if rural nursing homes get closed. It just means more elderly homeless,” or if funds are cut to other vulnerable populations, she said. “I don’t feel it’s a tug of war. We’re talking about morality.

“We need as a state to figure out what kind of Minnesota we want, if we want a Minnesota where some children are going to have to sleep outside in the winter.”

The number of homeless Minnesotans any given night (including those couch-hopping or bunking with family or friends) is believed to be more than 13,000.

“This is a serious, serious crossroads we are at,” Kuoppala says.

As for Hall, she’s had her own apartment at People Serving People for the last four years thanks to a supportive housing program and is most grateful for it after 10 years of moving in and out of homeless shelters.

I caught her on her cell phone, riding on a city bus back to her downtown Minneapolis home Monday morning after taking her second-grade son to class at his charter school.

The mother of five other children who are not living with her, she receives disability payments because she suffers from post traumatic stress disorder, anxiety and panic attacks, but is helped by medication. Her troubles started, she said, as a teenager when she was sent to a school for children with behavioral problems.

Hearing Minnesota was a better place to live, she moved here from Illinois on June 4, 2007, and “got my apartment” July 31 of that year. Since then she’s settled her son into a charter school where he is reading and doing math above his grade level, despite his Attention Deficit Hyperactivity Disorder, and herself into a lifestyle that includes being able to lay her head in her own place every night.