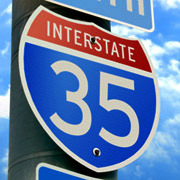 “… We cannot possibly build enough roads to satisfy demand, so we must consider alternative transportation systems.”

Nope. It’s in the July issue of Car and Driver magazine, usually a reliable champion of our autocentric culture for its 1.3 million readers. Its investigative report on “The State of the Union’s Roads” offers a dismal survey of collapsing bridges, crumbling pavement and woefully insufficient funds merely to maintain, much less improve, the performance of U.S. highways.

As we mark the 55th anniversary of the Interstate Highway System amid a state government shutdown that has halted work on Minnesota’s road projects, it’s worth heeding the hard facts that even a gearhead mag has owned up to.

“We demand far more than the Interstates were built to withstand,” the Car and Driver article says, noting that U.S. highway funding is falling more than 75 percent short of $130 billion in annual needs just to keep our 48,000 miles of Interstates in good shape. “The tipping point has arrived. We either have to figure out a way to rebuild the Interstates or watch them fall apart.”

Altogether, the magazine reports, the total of 4 million miles of streets and highways in the United States adds up to “the most comprehensive system of roadways on the planet.” And the Interstate system is “the greatest, most expansive, most expensive public works project our country has ever built.”

But the magazine also claims that the Interstate system “was built to get manufactured goods and agricultural products to market and to get long-range travelers from metropolis to metropolis. It fulfills these roles, but the America it was built for no longer exists. The U.S. no longer manufactures as it once did.”

Instead, freeways criss-crossing metropolitan areas produced the unintended consequences of suburban sprawl and chronic traffic congestion. For an extreme example, Car and Driver reports that the Tappan Zee Interstate Hwy. 287 bridge over the Hudson River in New York “was built to handle 18,000 cars a day but now carries 150,000; for six hours a day, both ends of rush hour, the Tappan Zee is at a virtual standstill with bumper-to-bumper traffic that backs up for miles.” It’s both structurally deficient and functionally obsolete, but “a replacement bridge built just to carry the current load is estimated at more than $5 billion,” the article says.

And that kind of money is nowhere to be found these days. Part of the reason, the article states, is a federal gasoline tax that has been stuck at 18.4 cents a gallon since 1993 and needs a dime increase just to keep up with inflation. But don’t hold your breath waiting for that to happen in this tax-averse political environment.

As a grim reminder of this, I have “wanted poster” on my office wall put out by the Taxpayers League of Minnesota. It called for the ouster of six Republican legislators who helped override former Gov. Tim Pawlenty’s third veto of a transportation funding bill in 2008. The bill, enacted a few months after the deadly collapse of the Interstate Hwy. 35W bridge in Minneapolis, raised Minnesota’s gas tax for the first time in 20 years, although not nearly enough to match inflation.

But the poster urged folks to “find out what you can do to STOP the tax bandits.” By 2009, four of the GOP 6 were out of office.

The measure that so outraged the Taxpayers League made it possible for a cash-short Minnesota Department of Transportation to rebuild and expand the Crosstown Commons 35W-Hwy. 62 interchange, complete other major highway projects, launch a nation-leading bridge improvement program and also shore up transit funding.

Even with that infusion of money and the one-time help of federal stimulus, MnDOT and the Metropolitan Council have essentially called a halt to highway expansion in the Twin Cities, largely because we can’t afford to maintain what we’ve already built. And our current state government shutdown has stopped dozens of repaving projects. Meanwhile, Congress and President Obama remain at cross-purposes over federal transportation funding, which is set to expire in September.

“This country has not had a comprehensive transportation strategy in decades, but now is an excellent time to consider one,” Car and Driver concluded. “And that means we need to take a hard look at what role highways should play and how they fit into the broader transportation network. Sprawling car-centric cities like Los Angeles, Phoenix, Salt Lake City and Dallas are rushing to build new mass-transit systems. They have to; the roads they have cannot satisfy demand. So they must harmonize with other modes of transportation to reduce the stress on existing roads as much as possible.”

And in December 2007, Car and Driver columnist Aaron Robinson told some more hard truths: “Freeways can’t be outsourced to China, and bridges aren’t on sale at Wal-Mart. Americans might be addicted to cut-rate jeans and TVs, but America’s highways can’t be rebuilt at 50 percent off the suggested list price. We’re all going to have to get in line and give a bit. Somewhere along the way, the acidic rhetoric that passes for issue debate in this country tarred all expensive public-works projects as pork. Don’t believe it until you read the little print.”

Nearly four years later, little has changed. In Minnesota and the rest of the nation, either we’ll build and maintain a transportation system for the 21st century, or watch what our forefathers left us turn to dust.