The Harbor View Cafe, a quaint little restaurant in Pepin, Wisconsin, has been a destination for Twin Citians for the past 32 years. If you’ve been there, you know that it’s a pleasant, scenic spot, serving delightfully fresh food on blue-and-white checkered tablecloths. Little did you suspect what goes on after the place closes down for the winter. Oh, they go wild.

During the off season, the Harbor View very occasionally opens up the kitchen for a special dinner. Last month, Harbor View chef Tom Skold, normally a mild-mannered Scandinavian, adopted the persona of imaginary Dean Martin impersonator “Danny Chameleon” and put on an Italian-American extravaganza. This involved lots of red sauce and some singing into a wire whisk, which “Danny” apparently mistook for a microphone. Oh, I’m telling you, it was quite a night. I spoke with chef Tom about it, once he was back to his normal self. 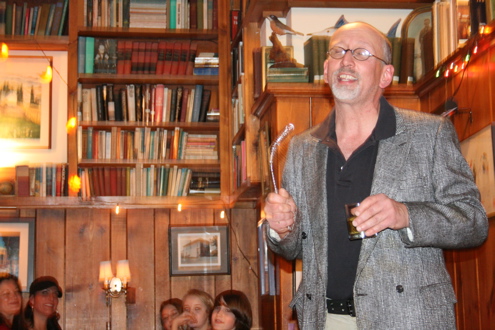 LL: What’s your usual role at the Harbor View?

Tom: We don’t really have job titles. We’re an anarcho-syndicalist collective. You know, like in the Monty Python sketch.

Tom: We’re non-hierarchical, pretty much. Since the Hinderlies left, Judy Krohn* and I have run the kitchen. We’re the ones cooking and we’re bossy when we have to be, but everyone works together as a team. 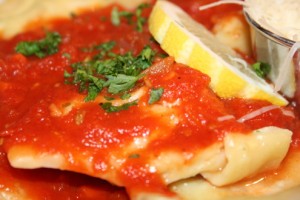 LL: Who are the Hinderlies?

Tom: The Harbor View was started by Paul and Carol Hinderlie, who met back in the ‘70s at a Lutheran retreat center in the Cascade Mountains, called Holden Village. Lots of the people who work here have been a part of Holden Village. Paul and Carol and some friends came down from the mountains and bought the old cafe that was here in Pepin, which evolved into the Harbor View. 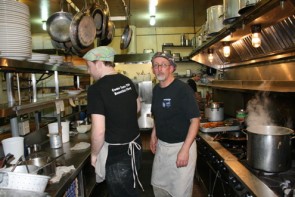 Tom: When I first started working at the Harbor View, it was a very Scandinavian environment. It can still get quite passive-aggressive in the kitchen. But you know, passive-aggressiveness is an original art form for us Lutherans, kind of like jazz. You have to live it to appreciate it.

Tom: Working at the Harbor View means always having to say you’re sorry.

LL: Good one. How long have you worked there?

Tom: My wife and I were regular customers for years. We used to love coming down from St. Paul on Sundays and feeling like we were part of the Harbor View community. Finally, about 18 years ago, they promoted me from customer to employee.

LL: What? They just pick random customers and throw them into the kitchen?

Tom: Well, I was a sous chef at the New French Cafe. I trained at Johnson & Wales culinary institute in Providence. Johnson & Wales is to the CIA as Avis is to Hertz: “We’re number two.” Mostly the training was lots of European guys yelling at you all the time. 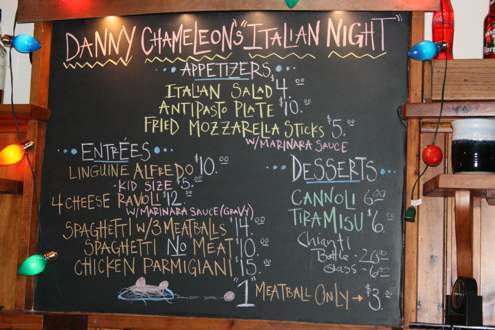 LL: How did you develop this Italian schtick?

Tom: When I was a kid, my favorite thing on TV was The Dean Martin Show. I wanted to be Dean Martin, crooning into the mic, drink in hand. He was my Joe Camel. My parents wanted me to be a Lutheran minister, but I had other ideas.

LL: The menu says the Italian Night chef is “Danny Chameleon,” who turns out to be you.

Tom: Yes, he’s my alter ego. The staff used to have annual talent shows over at Emmanuel Lutheran and give the proceeds to charity. My doppelganger would sing a few tunes, Dean Martin style. So when we were talking about doing an Italian night, Danny Chameleon came out again. 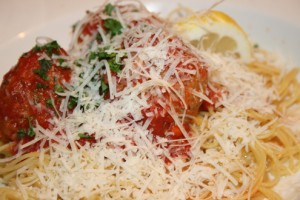 We thought it would be funny to serve a menu of Italian food that would never be seen in Italy itself. If an actual Italian would eat it, it wasn’t on the menu. It had to be retro or cliche enough to fit with the entertainment — that is, my lounge singing. We didn’t really expect 175 people to show up. That was surprising.

LL: But the food was fantastic! The ravioli! The meatballs! The Chianti! Well, the Chianti was cheap, at any rate.

Tom: Yes, the Chianti in straw bottles was part and parcel of the ambiance. There’s a reason people don’t drink that stuff too much these days. 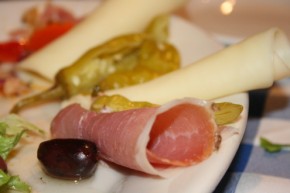 LL: Can you please connect the dots between the Lutherans at Holden Village, your anarcho-syndicalist collective, and the world-renowned food and hospitality of the Harbor View?

Tom: We practice hospitality with a small ‘h,’ which is something Paul and Carol and everyone brought with them from Holden Village. It really is a ministry: we try to give people a sense of importance and inclusion. It’s intangible, and most customers don’t put it into words, but they’re aware of it at some level. I think people identify so strongly with us because of the way our staff meets them at whatever place they are in their lives, working with genuineness and openness.

Of course, the food has to justify the price, and people are kind enough to say that the food is excellent. Lots of restaurants do food well, but you need the other part, too, the part that really takes an interest in people. 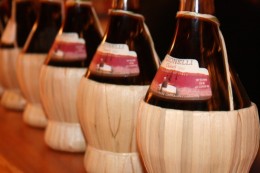 LL: Wow. Can I be in your commune, even if I’m not Lutheran?

Tom: Uh, it’s not a commune. I was sort of kidding about that anarcho-syndicalist collective thing. We just really like Monty Python. 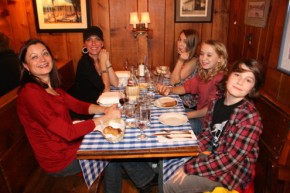 Tom: All right already. As I was saying, “Italian Night” was part of our general approach of hospitality and inclusion. We figured the event would be good for a few laughs, and laughing in a public place with other people is something we don’t get to do often enough. If you can motivate people to go out and be with other people, they might have an epiphany.

LL: How do you train your huge cadre of employees to buy into all this?

Tom: On the day we hire help for the season, we bake cookies. So when the kids from Pepin High come in, they get milk and cookies with their job application. Who doesn’t like milk and cookies after school?

We don’t have meetings and show PowerPoints about hospitality. We just practice it as a group. We’ve got a great staff here. And we’re lucky to have farm kids to hire. Anyone who grew up on a dairy farm isn’t going to find kitchen work all that hard.

LL: Any more wild nights in store at the Harbor View before you open again in March?

Tom: Oh, probably not. People get really excited for us to open in spring, and we don’t want to stick a pin in that balloon of anticipation. 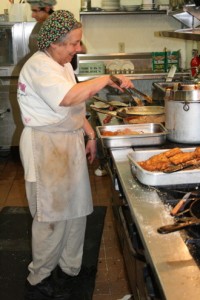 * LL’s note: Unsure of whether I should take the word of someone who has a lounge lizard as a doppelganger, I fact-checked Tom’s stories with chef Judy Krohn (right). Judy has worked at the Harbor View since 1980, even though she was raised Baptist. She confirms that both Holden Village and Monty Python have influenced the Harbor View’s culture, in a good way.

Judy remembers the days when it was still a burger joint. They started transitioning to a variety of food by doing “ethnic” menus a couple nights a week: Mondays were Chinese, and Fridays were Italian, setting the stage for extravaganzas to come.

She also notes that Tom Skold is a better singer than Danny Chameleon, who actually wasn’t too bad, either.